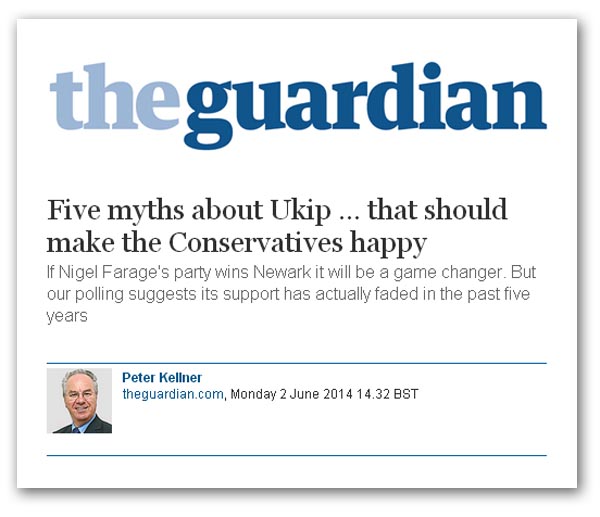 YouGov president Peter Kellner can't possibly be right about anything to do with UKIP. He's married to Baroness von Ashdown, is totally in the thrall of Brussels and is thus rigging the polls. Everything he says is calculated to suit the needs of EU.
The minor flaw in this argument, perpetrated so often by UKIP supporters, is that YouGov was the company which called it most accurately in the euro-elections. And now Kellner is doing his post-election analysis, assessing the prospects of UKIP, based on an analysis of polls in 2009 and currently. With that, he sets out five "myths" about the party.

There is no need to go through all of Kellner's prose, but he does make a number of points worthy of exploration. The first is his assertion that, despite the party being "plainly on a roll", it is now less popular than it was in 2009.

That much still doesn't seem to have percolated into the minds of die-hard UKIP supporters, but when double turnout might be expected at the general election, the party's percentage share of the vote can be expected to plummet.

Kellner, however, offers some more detailed analysis. This shows that in 2009 UKIP secured the support of fewer than half the voters who felt positively about it. The rest voted Conservative or BNP – or, in smaller numbers, Labour, Green or Lib Dems.

Last month UKIP harvested almost three-quarters of those who felt positive about it. The party also benefited from the collapse in BNP support and the greater willingness of unhappy Tories to lend their votes this time round.

The great problem, though, was that the party was not winning new friends. Simply, it was polarising public opinion and doing better at converting diminishing approval into votes. In so doing, it has alienated far more of the electorate. Millions more voters now regard UKIP negatively than in 2009, and fewer decline to take sides.

This is the "glass ceiling" effect we've been talking about, supporting our general premise that, despite the higher polling, UKIP has actually peaked. Farage may have pulled a lot more people into the polling booths, but he's upset an awful lot of people on the way – people who will never vote UKIP under any circumstances.

Speaking personally, I'm actually indifferent to the fate of UKIP in one respect. When it was primarily an anti-EU party, I regretted the loss of the platform. It was always easier to get your voice heard as part of a group than as an individual. But now the party is moving away from the EU, it is of much less importance.

What is important is the effect it might have on any future referendum and here what worries me is that support for leaving the EU seems to be going down.

This is something Kellner picks up. Five years ago, he says, we divided narrowly in favour of a complete withdrawal from the EU – 40 percent for leaving and 38 percent against. Today, by a modest margin, we prefer to remain a member – a majority of 43 percent against, as opposed to 35 percent who want to leave.

Kellner then tells us that we want "Brussels" to do less. Five years ago, 60 percent wanted the EU, rather than individual countries, to decide measures to combat climate change. That figure is now 51 percent. The proportion wanting the EU to set the rules for international trade is down from 35 percent to 25 percent.

In short, Kellner asserts, the centre of gravity of public attitudes seems to be moving towards the Conservative position: a growing public appetite for reducing the powers of the EU, especially on whom we allow to live in Britain, but not for quitting altogether.

But, as Farage often points out – says Kellner - the only way Britain can decide which immigrants to admit is to leave the EU (even though that isn't entirely the case). Until then we are bound by the principle that EU citizens can live in any of the 28 member states. However, the YouGov survey suggests that many people either don't realise that, or do realise it but regard free movement as a price worth paying.

The alternative is that people simply don't believe Farage, but that's another story. Either way, the immigration card is not quite as strong as UKIP thinks, bringing Kellner to point out that British hostility to immigrants is softening. Compared with 2009, we are less worried about their impact on British life. Then, there was a net -1 polled, who believed Britain had benefited from migration. Currently, the figure stands at plus 6.

That's not to say that voters want immigration to continue at the present rate. YouGov has found repeatedly that most people want it cut substantially. UKIP's views strike a chord with a great many voters. But on both the statements the polling company tested, hostility to immigration has declined in the past five years.

On other myths, Kellner tackles whether people feel worse off – the "loser" vote that Farage is harvesting – only to find that people are more confident. And then there is the question of views on politicians: less people, by a factor of 38 to 54 percent, regard them as corrupt.

Every which way, therefore, the signs are that UKIP's electoral attractions are on the wane. Add to that, in the euros, the Conservatives actually did better than expected while Labour under-performed. With the offer of a referendum on the table, and Miliband looking less credible by the day, the Conservatives begin to look electable.

Should this sentiment grow, UKIP gets caught in the classic two-party squeeze while, Kellner says, the political climate that has helped it on its way is less favourable now than it was five years ago.

The challenge facing Farage is to sustain his party's momentum, which makes, says Kellner, a UKIP victory at Newark a possible game changer. Success would establish the party as a permanent feature of British politics.

Defeat in Newark, on the other hand, could have the opposite effect, not least because it would be the first time in 25 years that the Conservatives had won a by-election while in government. In due course, we might look back on the local and European elections as the dark before dawn for the Tories, and the sun before dusk for UKIP.

I'm not close enough to the ground in Newark to tell which way it will go – but then I also have far too much experience of election campaigning to trust reports coming from canvassers. They always over-egg the pudding. That said, Lord Ashcroft's polling suggests that the Conservatives are on course to win the by-election. They lead UKIP by 42 to 27 percent, with Labour trailing in third with 20 percent.

These results suggest that the Conservatives have extended their lead significantly since the weekend, when a separate poll showed they were leading UKIP by 36 to 28 percent.

Based on the Kellner rubrics, this will be the end of UKIP - possibly a long drawn-out end but an end none-the-less. But, whether or not this is so, we are left with the task of preparing for a referendum. If, after years of neglect, one of the players is about to depart the scene, it would be so ironic if the real battle was about to start.