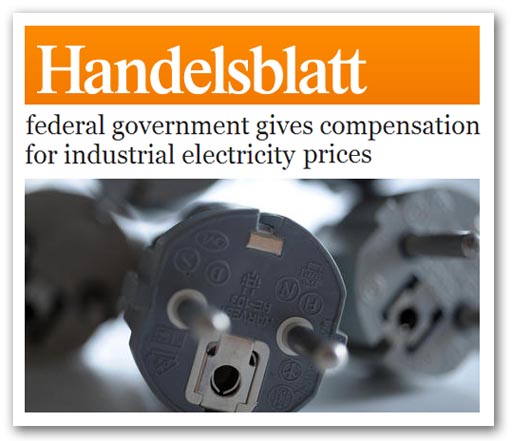 Flagged up by Handelsblatt this morning is an exclusive report telling us that the German federal government is to compensate energy-intensive industries for increased electricity costs arising from the European Trading Scheme (ETS).

The aluminium, steel, copper, chemicals and paper sectors are amongst the thirteen that will qualify for remission from carbon emission costs in Europe from January 2013, although the paper says the details of the funding are as yet unclear.

Nevertheless, new regulations are planned to apply from January 2013 when the third term of the European emissions trading scheme starts. Energy suppliers will then have to buy all the certificates they need to cover their own emissions.

The immediate thought here is that the Germans can't do this without breaching EU state aid rules, but then one recalls this recent report relating to the UK Energy Bill.

We have been told that the British Government is to consult next year on "proposals to protect energy intensive industries from anticipated increases in energy costs as a result of new subsidies for nuclear power stations, wind farms and other forms of low carbon energy".

Then comes the clue as to what is really going on. "Once a decision has been made", this report continues, "the government will seek state aid approval from the European Commission".

And here we have a magnificent example of "hidden Europe". Concerned that the increased costs to industry arising from the obsession with climate change will drive energy-intensive industries offshore, the "colleagues" are already on the case with Directive 2009/29/EC amending Directive 2003/87/EC "so as to improve and extend the greenhouse gas emission allowance trading scheme of the Community".

This permits member states to:

… adopt financial measures in favour of sectors or sub-sectors determined to be exposed to a significant risk of carbon leakage due to costs relating to greenhouse gas emissions passed on in electricity prices, in order to compensate for those costs and where such financial measures are in accordance with state aid rules applicable and to be adopted in this area.

The key jargon here is "carbon leakage" and with the exemptions defined in a 2009 Decision, what is now happening is that the UK and the German governments are belatedly taking advantage of EU law in a move to mitigate the damage caused to major industries.

Decarbonisation should not mean de-industrialisation. Energy intensive industries are an important part of the UK economy, in terms of economic output and employment throughout the supply chain. There would be no advantage, both for the UK economy and for global emissions reductions, in simply forcing UK businesses to relocate to other countries.

That is as neat a definition of "carbon leakage" as you can get, but what Davey did not admit – and neither does the German government – is that they constrained by EU law, and only doing what is permitted in the Directive and Commission Decision.

Thus does the hidden hand of the EU rule our destinies, but as long as the respective governments do not have to admit who is really holding the reins of power, the pretence can go on that our national politicians are still in charge.