EU politics: leaving is not so hard to do 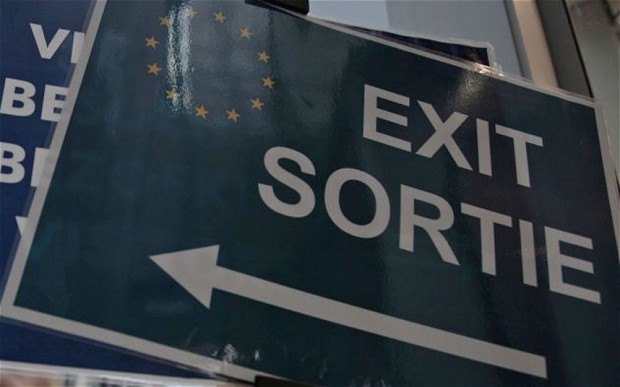 Allister Heath, one of the better journalists in the pack, is pondering on why it is that entrepreneurs and executives who excel at understanding what consumers want to buy become utterly baffled at their behaviour once they step into the polling booth.
This is in the context of the "thorny issue" of the UK's relationship with "Europe" (he means the European Union), where business support for continued membership of the EU "perfectly symbolises how out of touch so many City grandees have become".

Here, I think he is being rather kind about the degree of understanding of consumer needs. Most corporates - the types of businesses best known to the media - sell commodities or services, the marketing of which requires little understanding of individual consumers.

Their business models usually involve exploiting semi-monopolistic power and the economies of scale, rigging the market and relying on a high churn rate amongst competitors, enabling replacements to be acquired as they lose a proportion of their own customers through shoddy service and products, and indifference to consumer needs.

It is, of course, because the EU facilitates market rigging, and consumer sentiment is of such little importance, that big business supports EU membership. That is where the balance of convenience lies.

Thus, contrary to Heath's assertion that "Britain's business community has yet to fully grasp the seriousness of the public's euroscepticism, or that there is now a high chance of a referendum on the UK's membership over the next few years", I should think that "business" is fully aware of which way the wind is blowing.

At the moment, though, not enough has changed to make it worthwhile pushing at the exit, and the politicians have yet to come up with a formula that would reassure the corporates that their interests would be preserved.

Strangely, therefore, the issue is not that business does not understand politics – as Heath avers. It is the other way round. Politicians (and journalists) have a limited grasp of what makes business tick. They are misinterpreting signals and coming up with the wrong messages and solutions.

For instance, Heath tells us that "most large financial firms profoundly dislike the way that the EU is taking control of regulation and is clearly intent on crippling the City of London". Yet, he says, "they and their lobbyists still feel that there is no alternative, that the single market needs to be preserved at all costs and that no repatriation of powers can ever be countenanced".

Two issues stem from this. Firstly, much of the financial regulation which is so disliked originates not from the EU but from the Basel Committee on Banking Supervision. The EU is just the middle-man, turning the "diqules" into working legislation. Leaving the EU will not make any significant difference to the flow of regulation.

Secondly, and related to the first, there is not necessarily any linkage between preserving the single market and membership of the EU. Through membership of the EEA, it is quite possible to be a full participant in the single market, without being an EU member. Further, using the Article 50 negotiation process, it is quite possible to leave the EU while preserving trading relationships and upholding the status quo.

They need to take time out to understand how the global legislative machine works. The EU is only a small, regional player in this, and stepping outside the union does not mean we become detached from the global system. On the contrary, UK membership of other international bodies would continue, and we would thus maintain our influence in setting trading standards.

Then, they need to understand that a carefully negotiated Article 50 withdrawal can involve a "no change" model. As far as business is concerned, the day after leaving can be the same as the day before. EEA membership and a commitment to repatriating and re-enacting all EU law will ensure that business will not notice any difference when we exit.

Heath, in particular, should forget the rhetoric about the need to "deregulate the economy, reform our tax system and improve our competitiveness by ditching EU red tape". Big business loves regulation, loves red tape and thrives when competition is minimised. It is fear of real deregulation and less restricted competition that makes it so supportive of membership of the red-tape king, the European Union.

And since Heath's analysis is 180 degrees wrong, we can ignore his call for "a new anti-EU but pro-free trade business campaign group, modelled on Business for Sterling, the organisation founded by Lord Leach that did so much to save the pound and defeat those who wanted to impose the euro on Britain in the 2000s".

Business for Sterling morphed into Open Europe and, with Lord Leach's continued sponsorship, is a major promoter of Britain's continued membership of the EU. We need another "Open Europe" like a hole in the head.
If the politicians and journos get their act together, business will fall into line. The ultimate harlots, if you make it worth their while, entrepreneurs and executives are entirely biddable.