EU Referendum: the irrelevance of the EU 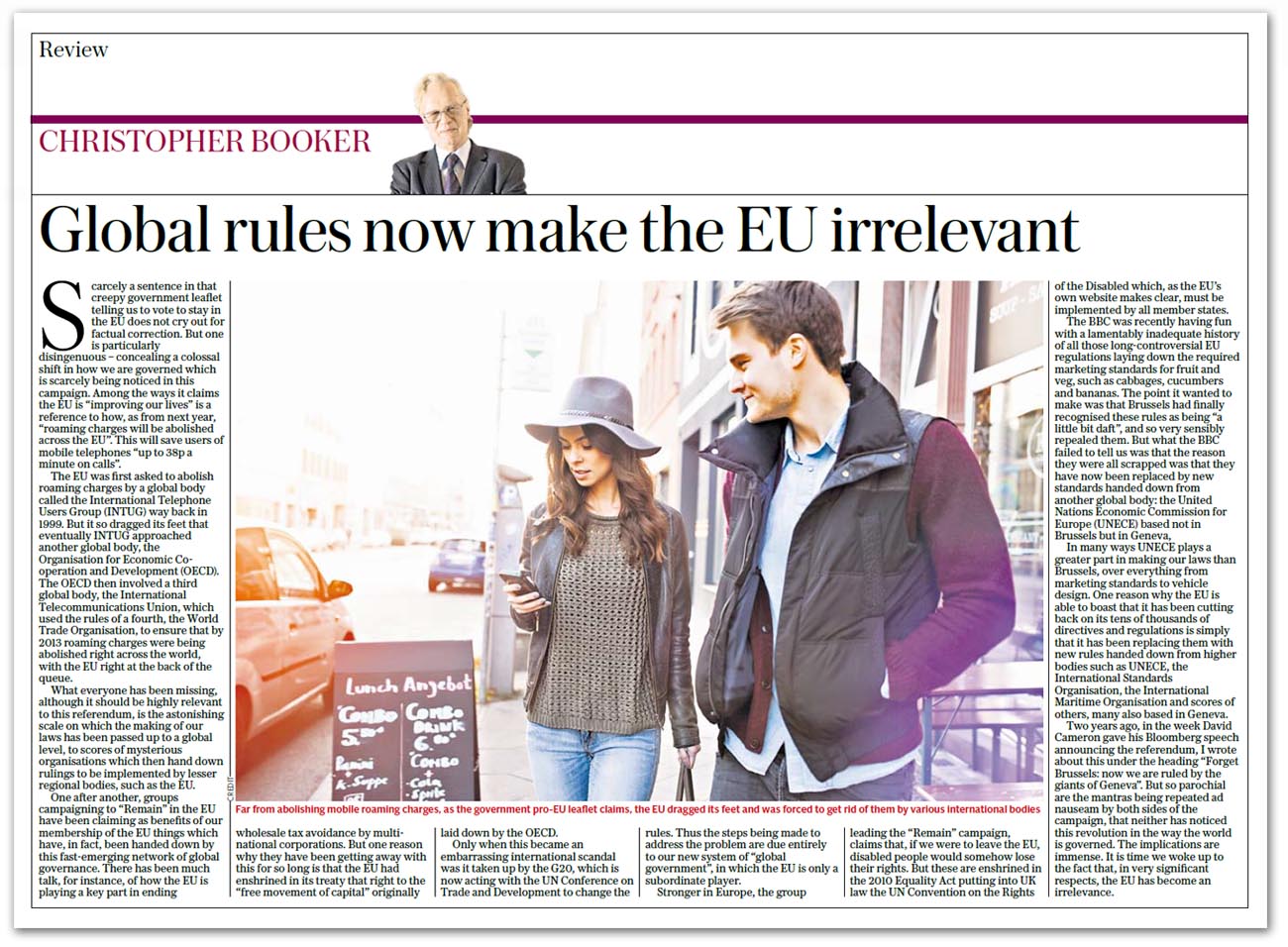 Booker takes an interesting slant in his column today, picking up on that "creepy government leaflet". Scarcely a sentence in the leaflet, he writes, does not cry out for factual correction. But one in particular conceals a colossal shift in how we are governed which is scarcely being noticed in this campaign.
This is the reference to how, as from next year, "roaming charges will be abolished across the EU", saving users of mobile telephones "up to 38p a minute on calls"  one of the ways the EU is claimed to be "improving our lives".

Relying heavily on EURef, Booker tells us it is true the EU was first asked to abolish roaming charges, and that was by a global body called the International Telephone Users Group (INTUG) way back in 1999. Typically, though, the EU dragged its feet, so much so that eventually INTUG approached another global body, the Organisation for Economic Co-operation and Development (OECD).

The OECD involved a third global body, the International Telecommunications Union, which used the rules of a fourth, the World Trade Organisation, to ensure that by 2013 roaming charges were being abolished right across the world, the EU well down in the queue.

Thus, says Booker, what everyone has been missing, although it should be highly relevant to this referendum, is the astonishing scale on which the making of our laws has been passing up to a global level. The process has gone to scores of mysterious organisations which then hand down their rulings to be implemented by lesser regional bodies, such as the EU.

One after another, those groups campaigning to "Remain" in the EU have been claiming every kind of benefit attributable to our membership. But the reality is that we don't really owe a fraction to the EU of what is claimed. Rather, much of what we see is coming from this fast-emerging network of global governance.

There has been much talk, for instance, of how the EU is playing a key part in ending wholesale tax avoidance by multi-national corporations, Booker reminds us. But one reason why they have been getting away with this for so long is that the EU had enshrined in its treaty that right to the "free movement of capital" originally laid down by the OECD.

This is also something we covered on the blog, especially when it became an embarrassing international scandal and was taken up by the G20, which is now acting with the UN Conference on Trade and Development to change the rules. So, if steps are at last being made to address this problem, Booker says, this is due entirely to our new system of "global government", in which the EU is only a subordinate player. Interestingly, even the WTO is getting involved.

Another area emerged when Stronger in Europe claimed that, if we were to leave the EU, disabled people would somehow lose their rights. Yet, as we quickly pointed out, disability rights are enshrined in the 2010 Equality Act, putting into UK law the UN Convention on the Rights of the Disabled which, as the EU's own website makes clear, is legally binding on all member states.

Yet another area where global agencies are active was one missed by the BBC, which was too busy engaging in mockery over EU regulations laying down the required marketing standards for fruit and vegetables, such as cabbages, cucumbers and bananas.

The point it wanted to make was that Brussels finally recognised that these rules were all "a little bit daft", so "very sensibly" repealed them. But what the BBC failed to tell us was that the reason they were all scrapped was that they have now been replaced by new standards handed down by the United Nations Economic Commission for Europe (UNECE) based not in Brussels but in Geneva.

In many ways UNECE now has much more part in making our laws than Brussels, over everything from marketing standards to vehicle design. One reason why the EU is able to boast that it has been cutting back on its tens of thousands of directives and regulations is simply that it has been replacing them with new rules handed down from higher bodies such as UNECE, the International Standards Organisation, the International Maritime Organisation and scores of others, many also based in Geneva.

Two years ago, in the week David Cameron gave his Bloomberg speech announcing the referendum, Booker first wrote about all this under the heading "Forget Brussels: now we are ruled by the giants of Geneva".

But so parochial are the mantras being repeated ad nauseam by both sides in this campaign that neither of them has noticed as far-reaching a revolution in the way the world is governed as anything since 1945.

The implications of this, says Booker, are immense. It is time we woke up to the fact that. In very significant respects, the EU itself has become an irrelevance. But there is at least a glimmer of light at the end of that long tunnel, in a paper from Roland Smith (White Wednesday), published by the Adam Smith Institute. Coincidentally, Roland writes of: "How global regulators are killing the value of EU membership". That is much the theme raised by Booker, and one we rehearse at length in Flexcit.

When the Vote Leave finally wakes up, it might realise that this process of globalisation is one of our stronger hands. We no longer need the middle man when we can deal direct.