Strategy ten: the opportunity in our hands 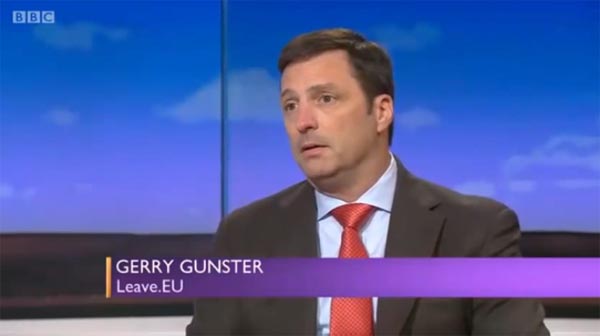 According to Gerry Gunster, who came over from the US to attend the scarcely reported "media event" held by Leave.eu on Wednesday, the EU referendum is a "double bank slot". We have to "show there is a problem", he says, and then "show there's a solution".

A few weeks ago, before he left for this event I had a long talk with Mr Gunster, attempting to appraise him of some of the realities of politics in the UK and the peculiarities of this very special referendum. But if he benefitted from the experience, he gave no sign of it during the Leave.eu event on Wednesday, nor during his brief interview with the Daily Politics show.

It was during that interview that he emphasised the importance of data in his work, telling us: "Numbers do not lie, quantifiable data will direct the message and the messengers. I'm going to follow the data".

At two levels, therefore, Gunster has got it wrong. And with his employer, Arron Banks having already spent Ł2 million on the campaign, one can only observe that, if he is guided by Mr Gunster, much of that money has been wasted – and especially the fee paid to Mr Gunster's company.

However, Mr Banks is nothing if not profligate. Only recently he offered Dominic Cummings Ł200,000 plus a "winning bonus" if he came over to join Leave.eu. This is the man described as the most self-aggrandising and destructive agitator the modern Tory party has produced, yet Mr Banks still wanted him on board.

"Cummings", we are told, "is determined that everyone knows that he is the cleverest person in the room. He has absolute contempt for those who disagree with him. It's not enough to beat them in argument, he has to destroy them".

Yet it is Arron Banks (with advice on strategy from Mr Gunster), and Dominic Cummings who, from their respective campaign platforms, Vote.eu and Vote Leave Ltd, have taken it upon themselves to define the strategy for the "leave" campaign.

Neither of these men are experts in the EU, or have even displayed any understanding of the intricacies of the relationships between the UK and the EU institutions and Member States. And in the case of Gerry Gunster, we have a man who has no direct knowledge even of British politics.

In neither case have these Banks of Cummings sought to initiate a public debate – amongst the wider "eurosceptic" community – on campaign strategy and, while both have sought advice from individuals such as myself (Banks casting his net wider than Cummings), that advice has been largely ignored and, in many respects, contradicted.

One warns these characters not to do certain things, or to cease certain activities because of their potentially damaging effect, only to have those warnings disregarded. More often, we find them going out to do precisely things which we have warned against. Complaints are then treated as evidence that "we are impossible to work with".

The trouble is that, in this referendum campaign, these are the "facts on the ground" – two dysfunctional egotists who demand support and unity, when both are running train-wreck campaigns and cannot even agree internally what their strategies should be, much less agree with each other.

From the majority of activists, though, they get a remarkably easy ride. But then I had very recently a communication from a former senior Ukip activist, now working for Leave.eu, telling me that: "If we all do a little bit of something then with combined effort we can win public support at the referendum".

"I'm not the sort of person", he told me, "who is going to sit back and talk about strategy as that does not convince individual voters".

These are the sort of people who are running the "grass roots" campaign. They share the common fallacy that activity equates to outcome: all that is needed is a high level of campaigning and the public will flock to the cause.

Not for him and his likes do the dictums of Gene Sharp have any relevance. A failure to plan strategically, he says, "means that one's strength is dissipated, one's actions are ineffective, energy is wasted on minor issues, advantages are not utilised and sacrifices are for naught".

And from that, my own view emerges that, if we do not plan strategically, we are likely to fail to achieve our objectives. A poorly planned mixture of activities will not move us forward. Instead, it will more likely strengthen the opposition.

With that in mind, one needs to have a closer look at Gerry Gunster – and specifically in the context of this exploratory series, in which our own ideas of strategy take shape.

What we concluded was that, in this referendum, highlighting the "problem" is of less relevance than might otherwise be. Both sides acknowledge that there are problems with the EU – that much is common ground. The dispute is over the solution. Mr Cameron and his supporters want "reform" and/or a "new relationship". We want to leave the EU.

In pursuing solutions, though, Mr Cameron has the initiative. He is the one who will make the offer which sets the tone of the campaign, and it is he who can determine the timing. Therefore, our first need is to build an intelligence gathering capability, to give us an early intimation of his intentions, together with an analytical capability which enables us to understand and use the intelligence we gather.

Once we are confident we have the measure of the "offer", our next step is to take it down. We have to attack it (and its proposer), to diminish its attractiveness, preparing the ground so that our target audience is then prepared to consider an alternative. Our third element is then to superimpose our own solution, which has to encompass our vision of what a post-exit UK looks like.

However, it cannot stop there. In this complex campaign, we than have to "de-risk" the choice, showing people that there are credible mechanisms which will enable us to extract ourselves from the EU, without disruption or unacceptable cost. This is different from and in addition to the "vision" and takes the form of a comprehensive exit plan.

Far from being the "double bank slot" that Gunster advances, therefore, this is a complex, four-headed strategy, only one element of which this supposed guru has correctly identified. And he would also have us wasting time on highlighting problems on which there is common ground.

We then see Gunster tell us that "quantifiable data will direct the message and the messengers", and that he is "going to follow the data".

This is from a man who regales us with the story of one referendum where the decision was whether to permit the use of jelly babies and pizza as bait for bear hunters, all in the context where the majority of referendums follow the status quo. Gunster's success record, therefore, is gained by getting hired by supporters of the status quo.

In this referendum, if there is a status quo (and part of our argument is that there isn't one), then we are opposing it, which immediately puts us on the back foot. But more problematically, this is not a simple question of jelly babies and pizza. As we have argued in this series, at this stage we do not actually know what question the voters will be addressing.

This takes account of the phenomenon in referendums where people disregard the question on the ballot paper, and substitute their own. And, in the absence of a settled position, where the electorate have not yet begun to engage, no amount of data will assist the campaign.

This is why we argue that political intelligence must guide the campaign. Data collection and analysis is a useful tool but, as we pointed out in this post, it must be the servant, not the master. Mr Gunster – with no understanding of the politics of this campaign – is quite the wrong person to decide the strategy. He is putting the cart before the horse.

Then, as to the messengers, when talking to Gunster, he professed to understand the British "class" system and its effect on communication. But class, per se isn't the problem. It's prestige, which is related but different. Gunster thinks he can overcome the problem by using ordinary people as spokespersons. This won't work, because he doesn't understand the problem.

What he also doesn't understand – a failure common to his ilk – is that both sides are going to be using data-driven campaigning. The "remains" have just stepped up their activities in this respect.

The thing is, one of the sides is going to lose. Simply using data to drive the message is not a winning stratagem. It is the combination how that message is delivered, and by whom, that makes the difference. This is a combination that Gunster doesn't understand and hasn't even considered.

Looking at the overall problem, Cummings in his own way is just as deficient in strategy, with a behavioural pattern that has some asking (with some justice) whether he is setting out deliberately to sabotage the leave campaign. We have, therefore, two major-league campaigners, both of them self-appointed and neither with any idea of how to formulate an effective strategy.

On the other hand, we could look at this problem in another way. Neither of the groups are competent, but both are self appointed. Gunster, with the support of his employer, represents himself as the "referendum guru", while Cummings, traipsing around Westminster in his scruffy tee-shirt and jeans, is happy to allow himself to be described as a "genius".

A point is though, that we do not have to take these people at their own valuation, or as described by their friends and supporters. They need our support to validate them, but if we withhold that support, they are nothing. Much as they would represent otherwise, they do not own the campaign, and they do not control the debate.

Interestingly, some recognition of those points comes from a Surrey University academic who holds the view that "the UK has suffered for a long time from a lack of deep public debate about European integration".

This is Simon Usherwood, who declares that "the referendum is probably the best opportunity there will be for a generation to get people interested and engaged enough to talk about, so we should make the most of it". Yet there are those, including Cummings and Banks, who would close the debate down, who demand conformity and unity, even though they themselves can't unify and have no coherent position to offer.

But, says Usherwood, the debate doesn't need to be brought to life by politicians or the media, because we enjoy a public space that is more open and accommodating of different voices than ever before. And nor, we would aver, do we require the permission of self-appointed guardians to have that debate. Usherwood goes on to say:

If those people who do care about having the debate can start to build it, then there is an opportunity to create something that is organic, considered and useful, however the referendum turns out. That opportunity is in our hands, not anyone else's.

And on that last point, he is absolutely right. The opportunity is in our hands. We can be bovine conformists, waiting to be led down the muddied track to an uncertain future, or we can strike out on our own, and dictate our own terms of participation. We have the tools – we do not need the input of second-raters who are in this way over their heads.