EU Referendum: back to basics 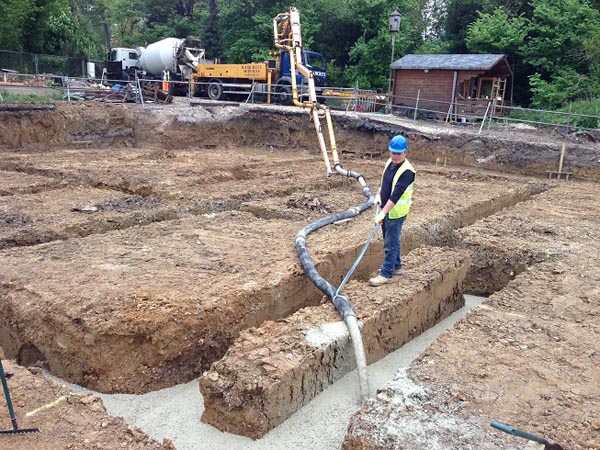 It is a given that, if you want to build a house, it must have foundations. But when you've completed the house and moved in, you don't have "foundation warming" parties, or preen over cocktails about the structural soundness of the concrete, its depth and the skill in its laying.

In fact, most householders rarely give a thought to what's underneath them ñ even though, if the foundations weren't there ñ or if they failed - they would very quickly know about the consequences, and the expense of the remedial measures.

So it is with campaigns ñ such as the referendum campaign on which we have already embarked. They too must have sound foundations. However, since our campaign is not a physical thing ñ but a process of spreading an idea and getting agreement with it (the idea of voting "no" to the EU) ñ so our foundations are not physical. They are ideas ñ we call it the "intellectual foundations" ñ because they are the product of the brain, the intellect, not brawn.

And just like the solid concrete foundations of a house, because you can't see them doesn't mean they aren't there. Furthermore, the same thing will happen if they aren't there. Like the house, the campaign will eventually collapse.

In terms of our "no" campaign, with a little help from our friends, I have been gradually able to whittle down the essence of our "intellectual foundation" to three words: problem; solution; and outcome. Now mixing metaphors outrageously, I jump from foundations to three-legged stools. I liken these words to the legs of a three-legged stool. They effectively constitute our "offer" to the public, upon which we will ask them to vote "no".

The first of the legs we classify as the "problem". We must give people cogent reasons why we should leave the EU, hence the first part of the trinity: telling them that their continued UK membership of the EU is problematical, so much so that it has become unacceptable. It is a problem we must eliminate.

Having raised the spectre of a problem, though, we now have to offer the solution ñ leaving the EU. But this is not just a simple matter of leaving, we have to tell people how we would go about the process of leaving. Our solution must have substance ñ it must be credible and it must have detail. That, our "exit plan", is the second leg.

The third part of the trinity, the third leg, is the outcome. This is essentially the "vision statement", which tells people what they can expect to gain from leaving, and why it is worth all the bother. We have to paint a picture of the "sunlit uplands" which make it clear that leaving the EU is a worthwhile enterprise, potentially with substantial rewards.

Now, as with a stool, all three parts must work together and be in balance. It is no good telling people that the EU is a problem if you haven't got a solution ñ a credible alternative to the EU and a means of delivering it. Then, it does not matter how credible our exit plan might be, if the rewards are slender and uncertain, it is hardly worth the bother. Our potential rewards have to be substantial ñ as well as credible.

It is into this that Flexcit comes, and I have a few points to make about it. Firstly, it isn't a campaign plan ñ it is a plan for getting out of the EU. Thus, it is one leg of our three-legged "stool", intended to form the platform (or foundations) on which the campaign is based.

Primarily though, Flexcit is a book, and it can only function as one. As such, I am well aware of its limitations and of the criticisms of it. However, I have to say that much of the criticism is equivalent to a complaint about a spanner failing to perform as an efficient screwdriver.

People then offer me well-intentioned advice on how to turn my spanner into a screwdriver, forgetting in the first instance that it was designed as a spanner. If it is refashioned as a screwdriver, it will then function poorly when it is used for undoing nuts - whence, no doubt, I will have another group of kindly people tell me that.

As it was intended to be a book, however, it should come as no surprise that it is intended to be read as a book. And as a book, it is well structured, tolerably well written and informative. It could be better structured, it could be better written and it could have more information. That is why it is work in progress. However, I also have to compromise. I only have so much time, and then the more information that goes into it, the longer it gets, and the less people are inclined to read it.

Furthermore, if I mess around with it, and do all sorts of things with it, then it may be more helpful for certain aspects of the campaign, but it will be a different document, and cease to be a book.

As to the function of this book, it was specifically designed to provide part of the intellectual guidance to those people (including me) who are intending to plan a "no" campaign. It can inspire other documents, and the information can be used to inform the debate. But that is the limitation of this particular document.

Its other limitation is that it is only one leg of the three. Developing and presenting the rest of the trinity is work in progress. And that as yet is a problem we need to address. I am still at this moment bogged down on the one leg. The other two still have to be crafted and fitted.

Even when our stool is complete, though ñ after that huge amount of labour ñ we have to remember that it is just a stool, the intellectual platform for our campaign. The platform is not the campaign ñ it simply underpins it.

Next (or even simultaneously) we have to get the campaign under way. That has three components. Firstly, we must have a plan. That entails working out the physical aspects, the "three ps" - the people, premises and property that we will need, and the way they have to mesh together, all to facilitate the execution of the operational plan.

Then we have to build a machine to fight the campaign ñ assembling the physical elements and ñ vitally ñ getting the cash to make it work.  Finally, we have to execute the plan, to fight and win the battle. That is the last and most intense phase.

In terms of timing, if we work on the basis of the 30 months available, the first year might be taken up with planning, overlapping with the building phase which would take us up to the end of the second year. That leaves the last six months to execute the plan and fight the battle.

Sadly, though, at the moment, we are still arguing over one "leg" of our stool, with the other two "legs" still under-developed. These must be completed, but all three "legs" must also be balanced. There is no point, for instance, raising problems pertaining to the EU if they can't be resolved by leaving. And nor should we offer in our "vision statement" things we can't deliver. Over-selling is not a good idea.

As to the campaign, the first part ñ the plan ñ must be focused on gaining the lead campaigner designation from the Electoral Commission. If we do not get that, we have someone else running the campaign. That could be disastrous.

But then we come to the building phase. At the moment, we need to be putting more effort into building than doing. We need people in this campaign, but their primary tasks need to be assisting us with the planning, and recruiting people. Thus, we need planners and recruiters more than we need doers, at this point. Before then, we need a structure, in which everyone can work to most effect.

As for our generals, we need them focusing on leading and planning, not sitting in the "desert" doing the equivalent of cleaning rifles.

The tragedy is that we've had more than ten years to prepare all this, and we're little better off what we were ten years ago ñ mostly, we're still just arguing over one leg of our "stool". The Norwegian "No2EU" campaign took five years to prepare for and win its 1994 referendum. We have 30 months to do five year's work. That's doable, but we don't have a minute to waste.