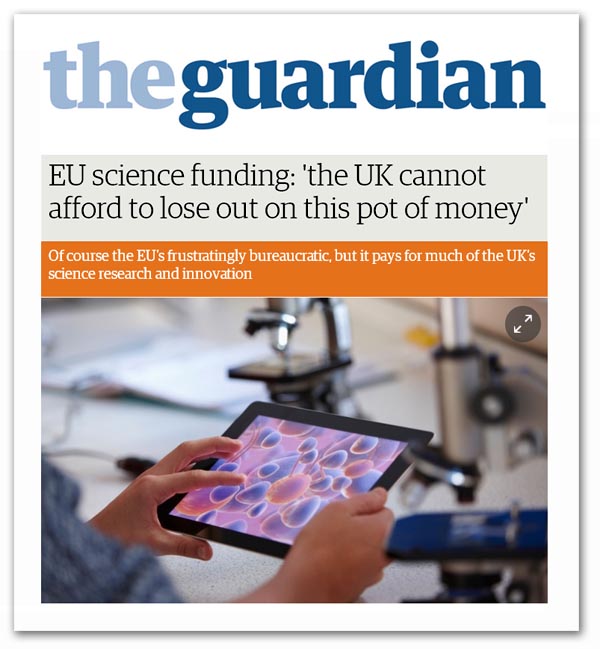 The Guardian is peddling lies - transparent and unequivocal. Its narrative is one of disaster for the academic community. Even the possibility that we'll vote to leave the EU would be a disaster for British science. The EU, it says, directly pays for much UK research and innovation, the paper tells us, and if we leave the EU we lose all that money (which we put in, in the first place).

Not to be swayed by tiny details such as these, the paper asserts that: "Given our public sector funding difficulties, and the understandably low priority research has in the political arena, we simply cannot afford to lose out on such a successful and empowering pot of EU money".

"Scientists love evidence, and the evidence is clear", the paper then asserts - thereby ignoring the evidence to the contrary. "Bluntly, if the UK were to leave the EU, we would massively and irreversibly damage an enterprise on which our future depends", it claims.

And so the inference goes that, if we leave the EU, the EU research funds dry up. But this is a lie - and totally contrary to the evidence. There is no requirement for a country to be a member of the EU for it to be part of its research programme. For heaven's sake, even Israel is part of the programme.

Those of you who have read Flexcit, will have picked up details on the Seventh Framework Programme and EEA members. It tells you that more than 2,350 Icelandic and Norwegian participants, including many small and medium-sized enterprises (SMEs), were involved. Icelandic researchers contributed to 217 projects, receiving funding of nearly 70 million. The Norwegians took part in more than 1,400 projects, receiving 712 million.

If the UK leaves the EU and rejoins the EEA, it can continue participation in the research programme (currently Horizon 2020) without interruption. Even without EEA membership, it can participate  as does Switzerland. The Guardian is telling lies, indulging in outrageous FUD.

But this calumny goes beyond the Guardian and extends to a campaign website called Scientists for EU, where these propagandists can spread their lies.

This brings me to the broader issue that this piece illustrates. Talking yesterday to a senior politician, he observed that the "out" campaign should already have a rapid rebuttal unit up and running, to deal with this sort of thing. To my mind, it is an indictment of Ukip, which should already be equipped to handle false claims.

Perhaps that's the sort of thing that Carswell's short money could handle, but for the fact that it would doubtless be wasted.

It is this sort of thing, though, that leads me to believe that we will lose the referendum. I don't see that we have any real chance of winning - for many different reasons, but all boiling down to the fact that the "eurosceptic" movement is too fragmented, has no coherent vision and  with particular relevance here - has left preparations too late. The Norway "no" campaign had five years to prepare for their 1994 victory.

I think the best (and only) thing we can achieve is damage limitation - doing what we can to avoid losing too badly. If the gap is narrow, then at least we can claim some legitimacy in continuing the fight.

There should also, in my view, be a secondary objective. We should use the campaign to build a standing, non-party-political organisation on the lines of the Norwegian "no" campaign, better to equip us to fight a "treaty lock" referendum should it come.

That would be our real opportunity to force EU withdrawal. In the interim, though, we need to claw back the anti-EU movement from Ukip, and to organise it on a non-partisan basis, ready and capable to deal with the sort of lies the Guardian is trotting out.

That, maybe, is for the future, but what is so disturbing is that a newspaper can so easily trot out lies, without feeling any need to check the veracity of what it is saying. And if this illustrates how the referendum campaign is going to go, we're in for a long, hard couple of years.