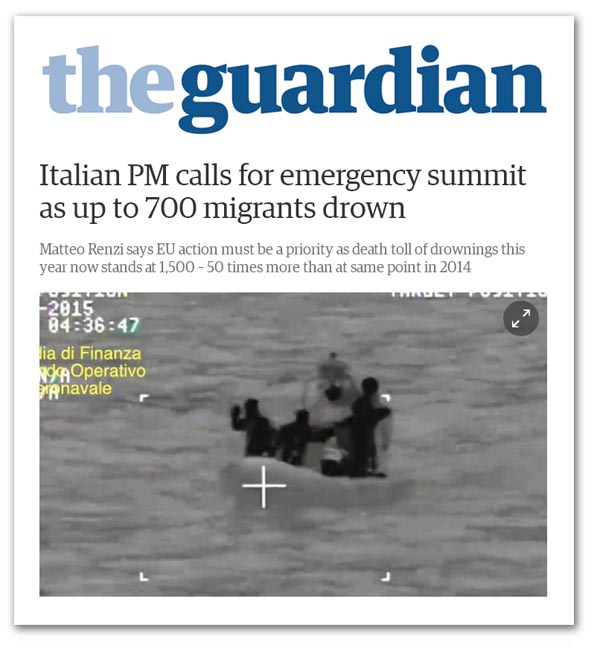 As a result of an ongoing failure of policy, the Italian prime minister is no having to call for emergency talks at EU level to deal with the deepening (but entirely predictable) migrant crisis off Italy's southern coast after as many as 700 men, women and children (possibly even higher were feared to have drowned in a Mediterranean shipwreck.

According to the Guardian, Matteo Renzi has said that concerted EU action had to be a priority after the latest tragedy 60 miles north of Libya in which a prodigiously overladen vessel capsized, leaving hundreds in the water. Some 700 are feared to have drowned.

This comes in the wake of a sharp upturn in the number of asylum seekers risking the dangerous sea passage from North Africa to Italy, with more than 10,000 would-be migrants having been rescued over the last ten days.

Yet, as we highlighted in February, this was always going to happen. Furthermore, it will continue as long as the EU has built into its Charter of Fundamental Rights, as in Article 18, the right to asylum, "with due respect for the rules of the Geneva Convention of 28 July 1951 and the Protocol of 31 January 1967 relating to the status of refugees".

Then to this must be added Article 19 which prohibits collective expulsions, or the removal of any person to a State where there is a serious risk that he or she would be subjected to the death penalty, torture or other inhuman or degrading treatment or punishment.

These two Articles constitute an effective guarantee that, once would-be migrant have overcome the obstacles and reached the territory of any EU Member States, they will be fed and housed and, for the most part, given the coveted EU citizenship that will enable them to start new lives in Europe.

The added twist is that, after October 2013, after more than 360 people had drowned off the coast of Sicily, the Italians initiated a standing rescue task force, code-named Operation Mare Nostrum which, despite denials, has acted as an additional "pull factor".

Against the likelihood of rescue, the asylum seekers are prepared to take the risk of paying smugglers to take them to sea in over-crowded and unseaworthy vessels, effectively playing high-stakes "chicken" with their own lives.

There is nevertheless a tendency of the media and some politicians to cast the asylum-seekers as the victims of people traffickers, but the term "smugglers" is more accurately used.* Those taking to the boats are hiring the smugglers to get them into Europe. They are complicit in the process and know full well what they are doing.

Thus, contrary to the assertions of an extraordinarily muddled piece in the Spectator by Olenka Hamilton, one time assistant to Conservative MEP Timothy Kirkhope, nothing is going to change until we stop issuing gold-plated promises of asylum, writ into the EU treaties as a human right.

In this context, it is important to appreciate that the rescue operation itself is not the ultimate pull. Said one recent migrant (link above), "Many people would go on the boats, even if they didn't have any rescue operations. It's not going to stop. It's simply not going to stop. The borders in the south [of Libya, where most migrants first enter the country] are open, and there is always going to be an appetite for it".

Those who in classic knee-jerk fashion who would have us expend treasure and effort on mounting a major (and prolonged) rescue effort are not thinking straight. They need to ask themselves why asylum-seekers are taking to the seas, other than because EU Member States have already fenced off the easily accessible land routes. There is no sense in forcing these people out to sea, and then spending a fortune on rescuing them. If you want a quick-fix, just take down the fences.

This, of course, just moves the problem to a different location - which has been the essence of EU policy for decades. But any long-term answer (in fact, any answer at all) to this problem requires the abrogation of the 1951 Refugee Convention (and the EU Charter provisions), and the adoption of offshore processing, something which even Brussels is mooting.

Only when would-be asylum seekers are made to realise that irregular migration (as it is called) is not the back door to Europe and a new life, and that irregular entry will simply buy them a prolonged stay in an offshore camp, will the flow dry up and the drownings stop. The root cause of the problem must be addressed - and that is the 1951 Convention.
Then, as we must, we need to formulate an effective refugee policy, which means focusing foreign, defence and aid policy on the issues at hand, rather than spending obscene sums on consultants and promoting climate change mitigation. Building barriers, and then affording free entry to those who can pay to surmount them, is not the humane or efficient way to manage our affairs.
*  Smuggling versus trafficking: People smuggling is distinct from trafficking in human beings insofar as smuggling implies the procurement of irregular entry into a State of which the individual is neither a citizen nor a permanent resident, for financial or material gain.

Trafficking, on the other hand, occurs for the purpose of exploitation, often involving forced labour and prostitution. For intermediaries involved in people smuggling, the source of profit derives from the provision of the service of enabling an irregular border crossing, whereas for those involved in organizing human trafficking the source is the exploitation of the person.

The difference can also be drawn from the concept of consent. Smuggled individuals are voluntarily involved in the process: they pay people smugglers to enter a country irregularly. Traffickers, on the other hand, use coercion and/or deception to force people into exploitation.

Contrary to trafficking, smuggling does not require an element of exploitation, coercion, or violation of human rights. This is not to say that those smuggled are not subject to abuse either before, during or after their journey.