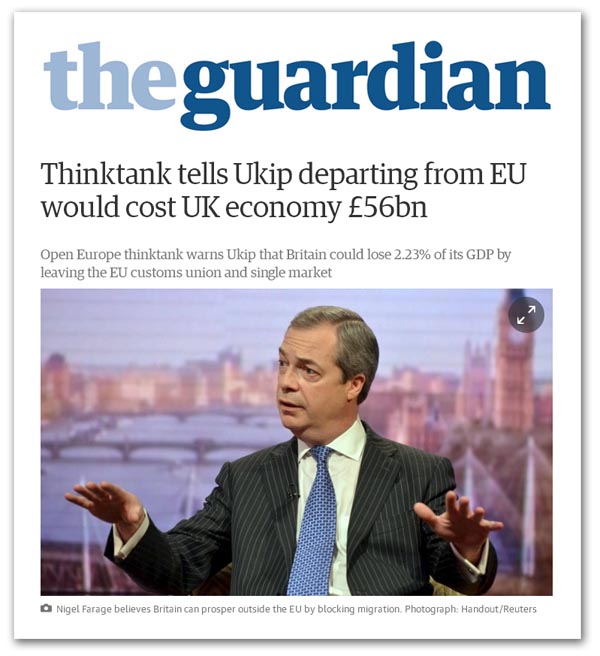 Britain faces a stark choice after an EU exit of allowing its economy to shrink by Ł56 billion, by shutting down its borders, or agreeing to the continued free movement of European citizens in a new deal with Brussels, says the Guardian, citing Open Europe as its source.

This is another thoroughly dishonest report from one of the country's least ethical think tanks, which is now devoting its energies to distorting the "EU exit" debate, in an attempt to garner support for its bankrupt "reform" option.

The tactics adopted are as familiar as they are dishonest, the think tank presenting a series of false choices, downplaying preferred options and playing the "scare" card by going for one of the least realistic options and attaching a massive price tag to it – in this case of 2.23 percent of GDP by 2030, or Ł56 billion a year.

The "straw man" is then presented by Mats Persson, director of Open Europe, as a challenge to Nigel Farage, who says in a message to the Ukip leader: "You have some questions to answer [on] exactly what you want to see outside. What is it?"

Persson, who is maturing as a consummate, unprincipled liar, thus frames the debate in terms of a "free trading Hong Kong-Britain with very liberal policies, including on migration", which he asserts is "what is needed to make us competitive", or "what probably most of what your [Ukip] voters want: to shut the borders and shut the world out which would mean a net loss in terms of the UK's GDP and economic competitiveness".

By presenting this "challenge" to Farage, however, Persson is shooting fish in a barrel. He is addressing the man whose party represents only the minority of anti-EU opinion, and which, in the twenty-plus years of its existence, has yet to come up with a coherent exit strategy. The think-tank director can thus cherry-pick any unrepresentative option he likes, to bolster his fraudulent case for renegotiating the EU treaties – which is the real object of the exercise.

In the OE report, we are told by the Guardian, four exit scenarios are set out, all of them offering the entirely unrealistic "big-bang" options with not the least attempt to consider hybrid solutions, which involve interim solutions and staged withdrawal.

As so often when it sets out to deceive, therefore, Open Europe is characterised by what it doesn't say – what it omits rather than what it tells its readers.

The worse case, which OE wants us to consider is Britain leaving the EU customs union and the single market, and failing to strike a trade deal with the EU. This, predictably, would create havoc with the trading arrangements with the EU, so much so that no one but an idiot (and Mats Persson) would even consider it. Not even Ukip is mad enough to consider this option, yet this is precisely what Persson chooses for his "Armageddon scenario". It is this on which he relies to support his assertion that leaving the EU could cost us Ł56 billion a year.

Predictably, and with weary constancy, OE skirts round the Norway Option – which is mentioned by name only once in the 104-page report. No analysis of the cost to the GDP of retaining EEA membership is made, by which sleight of hand, open Europe avoids telling us that this option would be cost-neutral.
Such pages as are devoted to EEA membership are dedicated to telling us how bad the option is, so much so that – as with the IEA "Brexit" competition - the option does not make the final list of scenarios. This is "death by omission", the option dismissed with the classic and entire misleading comment that: "Only EEA membership offers full access, but also involves accepting all the EU rules without a vote on their design or implementation".
This is now part of the current OE armoury, presenting the vote as if it was the be all and end all of the legislative process. Yet, we have been told time and time again that the politics are settled long before the vote, with EEA countries having greater influence over new legislation than the UK. This, OE steadfastly chooses to ignore.

One can only conclude from this that the Norway Option really does terrify the Europhiles, so much so that OE rushes past it, to invite its readers to consider a "mildly improved version of Switzerland's relationship with the EU". In this particular fantasy, Britain negotiates an exit from the EU, involving a free trade deal with the rest of the EU which would give the UK similar market access to the one it currently enjoys. Yet this is still supposed to cost 0.81 percent of GDP.

This then paves the way for fantasy number three, an "even better version of Switzerland's relationship with the EU" – one which, presumably, washes even whiter. In this, Britain would scrap many "EU regulations" and introduce "unilateral free trade" in which the UK would open its borders to foreign competition. Remarkably, this fantasy scenario would lead to a boost to GDP of 0.64 percent.

Now comes the fanfare for the "best case scenario". According to the mendacious Persson, Britain would secure a deal with the EU, implementing a unilateral free trade arrangement, while going for "the maximum deregulation on EU rules such as scrapping all climate change targets". This, supposedly, would increase the UK's GDP by 1.55 percent.

But just to make sure that we understand that Persson does not actually recommend this move, he inserts the sly barb, that: "In political terms this would make Margaret Thatcher look like a socialist". What he doesn't tell us is that the Climate Change Act would keep the climate change targets in place, and therefore, wipe out his GDP boost.

For the first time, however, Open Europe actually recognises the potential impact of global versus EU influence over regulation, but readers need not expect an honest exploration of the issue. There is no honest intent anywhere in this report.

OE keeps the focus tightly on financial regulation currently in force, with a view to talking down the global influence. There is nothing of G8, its relationship with the FSB, OECD and the Basel Committee, and things to come, where the trend is towards globalisation of regulation. And those expecting a references to Codex, UNECE, or the World Forum for the Harmonisation of Vehicle Regulation, will be disappointed.

Such omissions, though, go completely unnoticed by a media which is increasingly proving itself unfit to report on the EU debate. In this instance, the Guardian buys into the myth-setting, conveying the OE "belief" that its report "represents a particular challenge to Farage who will have to decide whether Britain should see a dramatic shrinking in its GDP or allow unrestricted EU migration".

The egregious straw-man, of course, is not the challenge it is intended to be. It should be, because Farage has been almost criminally negligent in failing to ensure that Ukip has a credible exit plan. But over-confidence has moved Persson and his minions to go so far over the top that all they are doing is challenging is their own credibility.

Needless to say getting their propaganda into the Guardian has proved no challenge at all, but they probably found the Telegraph even easier. This paper is steadily abandoning even a pretence of supporting the anti-EU cause, and always gives OE a warm welcome. This report proves no exception.

Here, though, the Telegraph goes the extra mile and give Simon Wolfson free rein to comment – the shopkeeper and advisory board member of Open Europe who has turned stupidity into an art form.

When it comes to the European Movement, and even the European Commission, there is a certain honesty in their approach. They deliver propaganda, but at least we know it for what it is. The slimy, underhand approach of Open Europe is all the more detestable for its pretence that it is something it isn't – an impartial commentator.

The techniques used would be entirely familiar to Goebbels, as Wolfson tells us of his "fear is that those who are fighting to leave the EU would do so in the spirit of shutting out the world rather than embracing a global prosperity".

"If these attitudes prevail then Brexit can only damage the UK economy", he says. One could be charitable and assert that only his stupidity prevents him knowing full well that one of the primary purposes of leaving the EU is to escape the grip of the claustrophobic little Europeans in order to rejoin the world trading community as a member in our own right.

But with even its cheerleader unable to argue the case for the EU honestly and directly, this Open Europe's "landmark report" marks a new low in its level of deceit. It is so bad that, even though the case made by Ukip may be dire, the OE approach even makes Farage look honest.