EU regulation: incompetence on every side 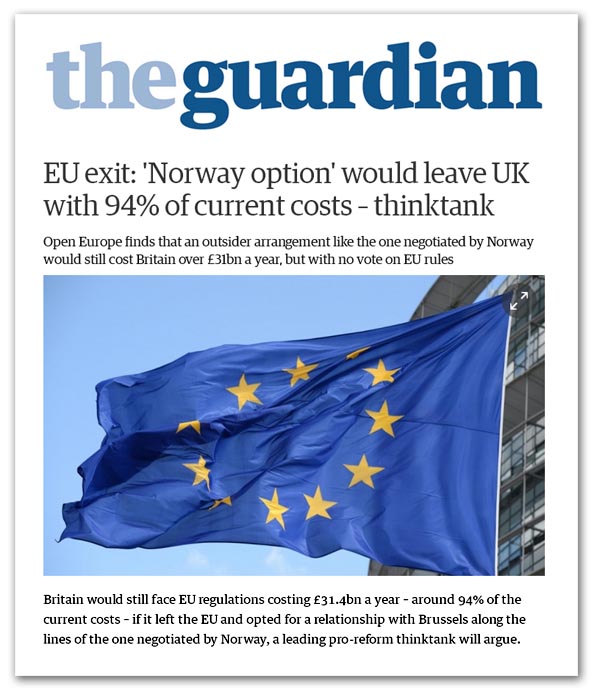 I have to say that I'm getting a little tired of the sheer silliness for the Open Europe children, and of their feline dishonesty – to say nothing of the gullibility of the media. And splattered over the Guardian is an example of media gullibility, with the headline, "EU exit: 'Norway option' would leave UK with 94% of current costs – thinktank", presented as if it was something new, special or even accurate.

The source is a trivial piece of work, picked over by the drooling City Am, which seeks to tell us that the Norway Option is a bad idea, because: "94 percent of the cost associated with the most burdensome EU rules would remain in place but the cost would be even harder to cut, since Norway has no formal voting powers over EU rules".

The point, of course, is that if these drivellers had actually bothered to read Flexcit (and were able to understand it), they would see that our exit plan – adopting the Norway Option as the first part – is economically neutral. The actual regulatory costs would be 100 percent of those borne under EU membership, as we remain in the EEA and repatriate the entire EU acquis.

As to the absence of formal voting on the part of Norway, we are seeing Open Europe creep away from their claim that "Britain would still be subject to EU regulations on employment and financial services but with no formal ability to shape them", and their alternative, that Britain would have "no formal political influence" over the Single Market rules.
Nevertheless, we see OE continue to ignore regional and global regulation, and the way EFTA/EEA members have greater influence over it than EU members. And while its thoroughly dishonest stance has been fully aired on this blog, it this type of propaganda is an indication of what we are going to have to deal with in any referendum campaign.

The current effort includes OE listing the "top hundred" of supposedly the "most costly EU-derived regulations in force in the UK", in their attempt to talk up the costs of the "Norway Option". But, unless OE researchers are truly ignorant, then we really are dealing with wilful propaganda, malicious in intent, the aim being nothing else but to deceive.

Yet, as readers on this blog will already know, the directives and regulations are part of the vehicle type-approval package which implements UNECE regulations – regulations which would remain in force even if we had completely withdrawn from the EU. Furthermore, within the EEA, we would have a vote on new regulations, through the World Forum on the Harmonisation of Vehicle Regulations, in Geneva.

Then OE have listed the CRD IV package the cost again attributed to the EU. However, we find the European Banking Authority telling us that the package implements the Basel III agreement. Although OE attributes its recurring Ł4.6 billion cost to "EU regulation", it is attributable almost entirely to international "quasi-legislation".

Another item on the OE list is the UK Renewable Energy Strategy which, although implementing Directive 2009/28/EC, is also mandated by the Climate Change Act. Both Directive and Act are variously implementing the Kyoto and subsequent international agreements. To attribute the Ł4.7 billion cost to "EU regulation" is wholly misleading – the polite way of saying "a lie". OE is peddling lies.

Even where we see the genuine application of EU law, as in the Genetically Modified Food (England) Regulations 2004, and two other Regulations, to attribute the cost to the EU is also misleading. Outside the EU, we would almost certainly have identical legislation, with exactly the same costs.

I am not going to trouble you with further examples from the OE list, but the point is made that significant costs attributed to the EU do not stem from EU initiatives. We would carry them whether we were in or out of the EU, "Norway Option" notwithstanding.

But, if the OE argument is false, and repeatedly so, so too is much of the propaganda from the "other side". That criticism applies especially to Ukip, Business for Britain and many others in the anti-EU movement- all of those which, to a greater or lesser extent assert that there would be immediate savings in regulatory costs arising from leaving the EU.

The trouble is that EU regulation, and how much money we may or may not save from leaving the EU, constitute the type of "biff-bam" arguments that the media love to report. But the two sides getting bogged down in such arcane details is precisely the wholesale turn-off for the general public that we need to avoid. If we are going to make any progress, the economic issues should be neutralised and "parked", not endlessly chewed over by a bunch of hyperactive think-tank wonks and ill-briefed politicians.

What we are seeing, therefore, is incompetent campaigning from both sides – although the need to overcome the status quo effect imposes greater demands on the "out" campaign. Equal incompetence means we lose. Either way, though, the anti-EU movement is being poorly served. And if we can't even trash the OE nonsense, we deserve everything we get.