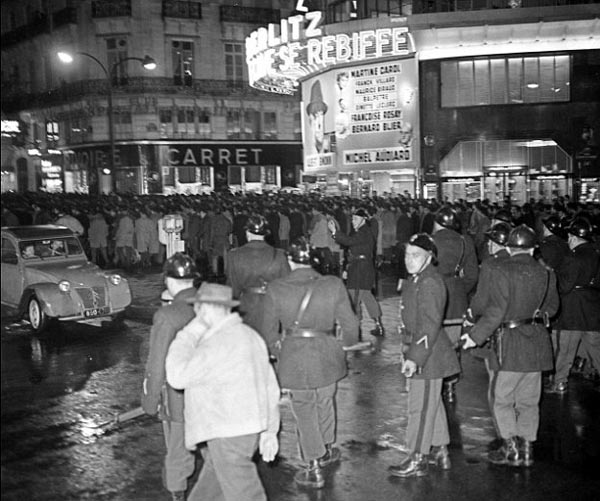 No one with any just claim to understanding the events of the last few days can be unaware of the uneasy relationship between French society and the estimated four million people of Algerian descent in the country. They are, in the words of Dr Martin Evans, writing in 2011, disproportionately poor and discriminated against; at times their young, caught between two different cultures.

Only a few years later, that is as true now as it was then but, in 2004, we saw written that the Algerian immigrants in France were "poor and ghettoised - and are a standing challenge to France's traditional image of itself and its cultural identity".

A year later, we see written this, a narrative about the fate of the descendants of the north Africans who had been drafted in to help with the reconstruction of France after the Second World War. They were housed in what the French call Les cites, and we are told:

The[se] "ghettos" are specially built for excluded and disfranchised migrants from France's former North African colonies - mostly Arabs and Muslims - and other parts of the world. Clustered on the peripheries of France's big cities, Les cités proved to be laboratories for dissent and resistance against oppression. The children of the immigrants who built France after World War II are being pushed further outside the French society.

It is important to emphasise that the French youth who are protesting against police violence and the policy of the French political establishment, are French citizens. They were born into first and second generation immigrants communities from France's former colonies. They are not motivated by religion, and the protest has nothing to do with Islam and Western cliché of "Islamic fundamentalism". It is a protest against oppression and racism. This is the only way the youth can express their anger and frustration at French political establishment which deny immigrants to be integrated in their diversity. Successive French governments failed to come up with a fair and successful integration policy.

The "second class citizens" have been pushed further out of the centres into France's larger suburbs of Paris, Nice, and Lyon Toulouse, Marseille, Strasbourg and other big cities where their parents once provided cheap labour for France's factories. The youth are excluded from the French society, and subjected to brutal and Nazi-like police harassments, encouraged by racist policies. In its annual report in April 2005, Amnesty International have criticised the "impunity" provided to police and police violent treatments of youth from North African origins during the provocative identity checks. In fact, an Arab or an African man has no right to look a policeman in the face during this deliberate and daily racism faced by young people of colour.

Interestingly, the Amnesty International report for 2013 shows how little things have changed.  Two years before that report, though, an unlikely source, the Daily Mail published an article describing how in 1961, during the war with Algeria, French police had slaughtered upwards of 200 protesting Algerians – some thrown into the Seine to drown.

Some demonstrators had been arrested and taken to police headquarters near Notre Dame, where they had been confined in a courtyard and battered to death. Police handing out the beatings first removed the identification numbers from their uniforms. Senior officers watched the brutality, ignoring pleas by shocked officers to halt the killing.

On this, the freedom-loving French press were completely silent, paving the way for an official cover-up, whence in 1968 De Gaulle dismissed the killings as "a matter of secondary importance" and issued an amnesty to all police personnel for crimes committed during the war with Algeria. In 2011, the Mail wrote:

Some believe that the massacre was the result of confused government policies towards North Africans in French society, which simultaneously tried to promote integration by offering them special assistance in health, education and jobs — while actively stoking up resentment against them.

The result of these mixed messages was an eruption of killing and a rift between the communities that has not healed to this day. Racism is rife in France and attacks on North Africans remain sickeningly commonplace. They tend to live on blighted housing estates, the successors of the earlier shanty towns. Even today, these estates are regularly subjected to curfews, and paramilitary forces move in to deal with any disturbances.

French Algerians report they are made to feel unwelcome in the city centre and Paris's tourist spots.

Also covering the same events was the Observer, which concluded that few would argue that the tribal murders committed by Paris police half a century ago are likely to be repeated today. However, it added, "nor would anyone pretend that the discriminatory policies which gave rise to such horrors have disappeared from modern France".

The three French-Algerian men believed responsible for the 12 deaths in Paris on Wednesday would have been steeped in a recent history of this conflict which, in the 1960s, was exported from the battlefields of Algeria to Paris itself. During one notorious atrocity in 1961, up to 200 Algerians were slaughtered around national monuments, including the Eiffel Tower and Notre Dame cathedral. Many were tossed into the Seine from some of the most beautiful bridges in the world and left to drown.

Half a century on, the violence has subsided but there is still a strong sense of resentment among alienated communities living in housing estates on the outskirts of the capital. Many are Muslims of north African origin who complain that discrimination against them extends to every field of life, from housing and employment to the right to religious expression. This is particularly so as politicians of the left and right regularly blame Islam for these social problems, which in fact have nothing to do with spiritual faith.

To add to this narrative we even get Robert Fisk, with plausible arguments which say that "Paris attack brothers' campaign of terror can be traced back to Algeria in 1954".

That much and much more is indeed arguable, and plausibly so, but not according to the self-appointed "experts" on the comment thread of my previous post. A significant number will have it that Islam is the primary or even sole motivator for the killing, insisting that alternatives are "not up for debate".

This is alongside those who rashly and irrationally argue in support of Farage that the killings are a consequence of multiculturalism. Yet, by even the most basic of definitions, multiculturalism is a celebration of diversity, manifest in an official policy where cultures other than the host culture are maintained and supported.

Underpinning multiculturalism, of course, is tolerance of other cultures, and there is nothing whatsoever in the French treatment of the Algerians that can be called tolerant, or in any respect be identified with multiculturalism. Those that argue otherwise are demonstrably wrong, and by reference to easily verifiable facts.

Furthermore, all this is very far from academic, and comprehension is not assisted by ill-informed prattle. As I have argued many times, the greater part of any solution to an ill is correctly to identify the problems. The often bigoted and always blinkered insistence of some on reducing complex problems to a series of formulaic mantras is misguided and damaging.

Not least, as I have argued elsewhere, we are dealing with the effects of tribalism – and the breakdown of tribal disciplines – and the relationship with Islam, which is probably a powerful, if scarcely recognised phenomenon.

Whatever the actual causal factors, they are bound to be many, with complex interactions. Thus, those with the ability to influence the debate should keep their minds open to a range of possibilities. The issues we are dealing with are too important for polemics, political posturing and the blind certainties that we have seen over the past few days.

By that measure, then, I stand by my view that Farage – and those who support him – are both wrong and dangerous in promoting their superficial mantras. We need better than this, and if people such as Farage can't shape the debate responsibly and with more understanding than they have shown, they are best keeping quiet.