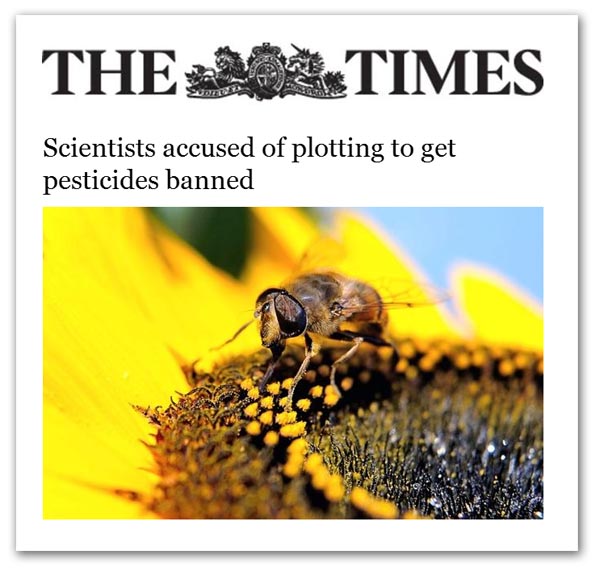 Almost a year to the day, when the EU imposed a two-year moratorium on the use of neonicotinoid pesticides for oil seed rape (OSR), Ben Webster of The Times is telling us that the ban was the fruits of a plot engineered by a group of scientists.

This is not the first time we have been aware that the neonicotinoid ban was more than a little suspect, having written in November last year of devious carry-ons in the European Food Safety Authority. Dellers picked this up and then followed through last April, pointing to an EU source which suggested that bee mortality was not as high as had been claimed.

Now, Webster (with more details here) is telling us that research blaming pesticides for the decline in honeybees has been called into question by "a leaked note" suggesting that scientists had decided in advance to seek evidence supporting a ban on the chemicals, before "definite proof" had been established that neonicotinoids were the cause of a perceived loss of insects.

This "private note" records a discussion in Switzerland on 14 June 2010 between four scientists about how to persuade regulators to ban neonicotinoid pesticides. It was agreed that four key research papers would be published in peer-reviewed journals.

Building on these papers a research paper would be submitted to Science (first choice) or Nature (second choice) which would introduce new analyses and findings across the scientific disciplines to demonstrate as convincingly as possible the impact of neonicotionoides on insects, birds, other species, ecosystem functions and human livelihoods.

This high-impact paper was to have a carefully selected first author, a core author team of seven people or fewer (including the authors of the initial four papers), and a broader set of authors to give global and interdisciplinary coverage. A "significant amount" of the supporting evidence would be placed in official "Supporting Online Material" accompanying the paper.

To give this paper as much profile as possible, it was proposed that a parallel "sister paper" (a shorter Policy Forum paper) could be submitted to the same journal simultaneously, drawing attention to the policy implications of the other paper, and calling for a moratorium in the use and sale of neonicotinoid pesticides. The plan was to pull together "some major names" in the scientific world, as authors of this paper, again to give it more profile.

Getting these two papers published, it was felt, would have an "enormous impact", which could then be used as the launch platform for a campaign led by WWF. It would be much harder for politicians to ignore a research paper and a Policy Forum paper in Science. The most urgent thing was "to obtain the necessary policy change to have these pesticides banned, not to start a campaign".

A stronger scientific basis for the campaign would hopefully mean a shorter campaign. In any case, this is going to take time, because the chemical industry would "throw millions" into a lobbying exercise. In order to prepare for the paper to be submitted to Science it was thus necessary to plan it simultaneously with the first four more detailed papers (to be sure that the first four papers did not unintentionally undermine the proposed high-impact.

A small meeting was therefore considered necessary, to plan the campaign. These would include the authors of the first four papers, David Gibbons/Mark Avery, Maarten Bijleveld, Pierre Goeldlin, the IUCN SSC and CEM Chairs (or their designates) and one or two people "experienced in high-impact publishing".

The scientists at the Swiss meeting included Maarten Bijleveld van Lexmond, chairman of the Task Force on Systemic Pesticides, and Piet Wit, chairman of the ecosystems management commission of the Swiss-based International Union for Conservation of Nature (IUCN) – what Webster describes as "an influential network of scientists and environmental groups".

Nick von Westenholz, chief executive of the Crop Protection Association, which represents Bayer and Syngenta, manufacturers of neonicotinoids, said: "The work of the Task Force is regularly cited by activists as being strongly independent research, conducted with the utmost scientific rigour".

He adds, "From reading this document it looks to me that this group decided on its conclusions first and then embarked on the research to back them up".

Von Westenholz concludes that the behaviour, "clearly flies in the face of claims that the IUCN study represents independent and rigorous science. The claims of the Task Force now seem increasingly suspect and I hope that policymakers will treat these studies with an appropriate degree of caution".

Piet Wit agrees that the leaked note was accurate but he denies that the scientists had decided the conclusions of the research in advance. Dr Bijleveld van Lexmond, who was a founding member of WWF in the Netherlands, rather predictably, claims that the Task Force was "independent and unbiased" – thus concluding Webster's report.

Far from simply "advising" the IUCN, as Webster seems to indicate, the Task Force is an integral part of the IUCN. Furthermore, its chairman, Dr. Maarten Bijleveld, was not only co-founder the WWF in the Netherlands, he is an Executive Officer of the environmental committee of the IUCN.

Task forces within the IUCN are not open to all members, but by invitation only. This one, on Systemic Pesticides, coincidentally, was set up in March 2011, just as the EU funding became available. Its objective was to "bring together the scientific evidence needed to underpin action on neonicotinoid pesticides".

And while Ben Webster points to the "leaked letter" as the source of his story, the Task Force website, in the public domain, declared as its objectives, attracting financial support, publication of three related scientific journal articles, and "a Worldwide information campaign and identification of alternative pest control for changing policies and preventing inadequate risk assessments in the future".

In the event, the papers were not published in Scence, but eventually seven found their way into Environmental Science and Pollution Research, culminating in this one in October 2014.

From the very outset, though, the IUCN was intent on a ban on neonicotinoids, and sought the classic – if unethical – means of influencing opinion, through apparently unrelated peer-referenced papers by an apparently independent institute.

As it turns out, not only is the IUCN not in the least independent, it was being funded by the EU, specifically on this issue, for the very purpose of seeking a ban on the product use, one which had already been approved by the regulatory process, with the EU undermining its own system.

At the time, it fell to Owen Paterson to support a vital product, already authorised by the EU, replacing a range of far more damaging chemicals. With the support of the Defra chief scientiist, he opposed the ban, based as it was on limited laboratory testing, rather than field-based trials. Defra research had showed no link between the chemicals and bee health under normal circumstances.

Despite an alliance that included Hungary, Paterson was unable to gain enough support from the "colleagues", and was unsuccessful in blocking the "Green blob". Now, as we enter the second year of the ban evidence mounts of the damage done by this unnecessary and unwarranted intervention.

Growers have reported oilseed rape (OSR) yields down by about 30 percent in some areas and many have struggled to control the booming flea beetle population which was brought on by the unusually warm autumn. And a report by the Agriculture and Horticulture Development Board noted that 2.7 percent of the national winter OSR crop, equivalent to 18,000 hectares (44,480 acres), has been completely lost to the beetles.

This, though, is only the start of it. The EU has shown itself incapable of sticking to its own systems and procedures, a form of advanced regulatory dysfunction that threatens innovation and damages agricultural productivity. And not only is it undermining its own processes, it is financing activists to lobby against products it has authorised for use.

The solution to this is obvious, although it is taking people far too long to come to that obvious conclusion.