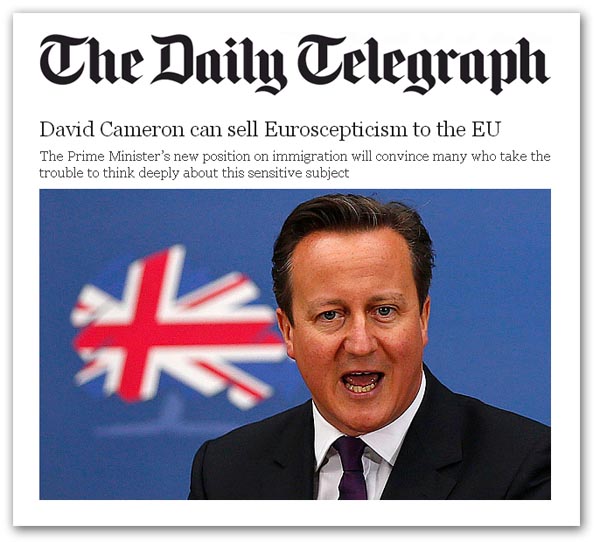 The is an interesting battle being played out over Cameron's speech, the nature of which is so subtle at a technical level that there is not a chance in a million that the media will understand what is going on.

Essentially, all the media want is the biff-bam personality politics, witness this piece from the Spectator's Isabel Harman. What she is after is a Eurosceptic rebellion, so that's what she's writing about – the only thing in which she is truly interested.

Peter Oborne, on the other hand, has been looking in depth at the speech. And he sees in it something "wise" and "thoughtful", selling a "Gaullist vision of a Europe of sovereign states collaborating in a common endeavour" - something which exists only in his imagination.
This vision, he writes, "involves compromise, endless attention to detail, and an ability to build alliances across Europe". On the basis of the speech, he believes Cameron "is capable of selling the Eurosceptic case to the rest of the EU and winning".

Thus does Oborne conclude that the Prime Minister is "a most formidable politician", one of only two things he gets right. The other non error is his assertion that the speech "gives us our first glimpse of how Mr Cameron will handle the European question if he wins the general election next May".

What Oborne hasn't realised – and what none of us are supposed to realise – is that Cameron has rigged the game again. And, if I'm right on this, we've all been played.

By way of background, we see the latest YouGov poll which tells us that an EU referendum poll held now would yield a majority of 45 percent in favour of staying in the EU, against 37 percent who would vote to leave.

If Mr Cameron carries out his renegotiations and delivers "significant reforms", such as "placing a limit on the number of immigrants allowed to enter Britain", the majority climbs to 58 percent and those who would leave drop to 25 percent.

But, if Mr Cameron fails to get these fabled "reforms", the situation reverses – a majority of 43 percent would vote to leave, while only 34 percent would want to stay in. 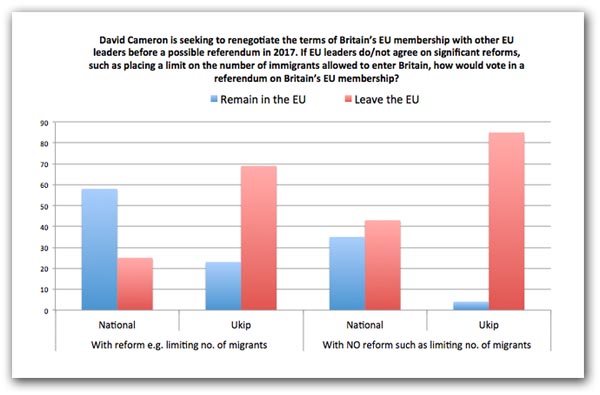 There is no way that Mr Cameron cannot be aware of this dynamic – he must know he has to deliver the goods or, for him, it's game over. But, since he cannot deliver a wide-raging treaty change, the game must be rigged.

And that is where yesterday's speech takes us. What the Prime Minister has done is narrow down the "reform" spectrum to cover one subject, and one subject only – immigration. To be more specific, it has been narrowed down to freedom of movement.

Why that matters is simple. Under the new Lisbon Treaty protocols, treaty change has become a complex and time-consuming affair. It involves a treaty convention as well as an intergovernmental conference, taking four years door to door.

However, Article 48 – which deals with treaty change – also allows for a "simplified procedure". Potentially, this would allow the procedure to be completed on a rainy afternoon in Brussels, perhaps on the margins of a European Council. There is, though, a small condition. The changes permissible are confined to Part Three of the Treaty of the Functioning of the European Union (TFEU) which, just as it happens, include freedom of movement. Against all the odds, therefore, Cameron could pull off a quickie treaty and come home in triumph, waving a piece of paper.

Another clue is that Cameron is relying on the Europhile Open Europe to prepare his narrative. This provides media cover for the idea that the "plan" will deliver a reduction in immigration – long enough to get past the election and the referendum campaign.

And, if these seems a tad cynical, the speech itself leads us to suspect there is more to Mr Cameron than meets the eye. In the early part, we read:

Those who argue that Norway or Switzerland offer a better model for Britain ignore one crucial fact: they have each had to sign up to the principle of freedom of movement in order to access the single market and both countries actually have far higher per capita immigration than the UK.

… which suggests that the Prime Minister knows full well that we can have access to the Single Market without being in the EU. But then we get this:

Those who say we would certainly be better off outside the EU only ever tell you part of the story. Of course we would survive, there is no doubt about that. But we would need to weigh in the balance the loss of our instant access to the single market, and our right to take the decisions that regulate it.

Here, Mr Cameron suggest that, if we left the EU, we would lose our "instant access" to the Single Market. As "instant" and ordinary access is probably a distinction without a difference, this suggests that we are being played.

Nevertheless, the point made in my earlier piece before we were so rudely interrupted still stands. If it is possible to exert some control over immigration while we are in the EU, then we could exert even greater control if we were in the EEA, and even more still once we have walked away from the ECHR.

Oborne, in the piece to which we referred earlier, praised Mr Cameron as a "formidable politician", and in playing us – if that is what we are seeing – he is certainly showing his mettle. But he may actually have overplayed his hand. Expectations can be managed, but not totally controlled, and in narrowing down the treaty scope, his new treaty may lack conviction and fail to produce the result he wants.

Our biggest problem here, though, is the media wanting to report personality politics, instead of dealing with the issues. Cameron could end up pulling a fast one, with most people remaining totally unaware of what is going on.