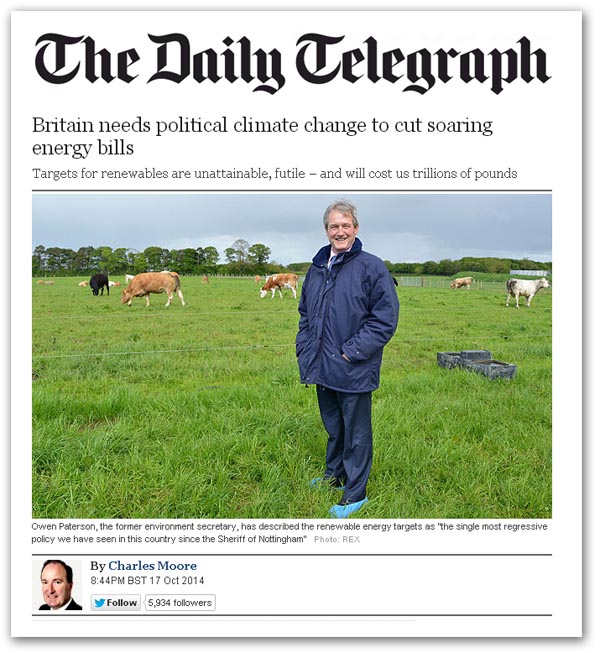 The thing that a lot of commenters here and elsewhere seem to forget – or not realise – is that energy policy is primarily about politics. That is not too simplistic. The technicalities are vitally important, but without a sound political framework, nothing coherent is ever going to be achieved.

This is where Charles Moore in today's Telegraph is particularly astute, in identifying the politics as the driver of the mess that currently passes as our energy policy. He also notes that there is essentially no difference between the three main Westminster parties, which does leave Ukip out on its own, albeit with nothing approaching a coherent replacement policy. All they can offer is to tear down the Climate Change Act and hanker after multi-fuel electricity generation that does not include renewables.

Moore's observations take us to a refusal of the political parties to address the increasingly visible failure of their policies, with no one wanting to discuss the causes. Owen Paterson, then the environment secretary, was the only minister who dared raise doubts. He annoyed what he calls the "green blob". David Cameron duly sacked him this summer.

When this was quoted on the BBC News, he was saying no more than millions of ordinary people have been saying for years. Yet it was very striking to hear it in public, because no other elected person charged with these responsibilities had said anything like this before.

It would have been better still if the BBC had completed the Paterson sentence. He went on to say that wind turbines had devastated 'the very wilderness that the 'green blob' claims to love, with new access tracks cut deep into peat, boosted production of carbon-intensive cement, and driven up fuel poverty, while richly rewarding landowners".

This, Mr Paterson also said, is "the single most regressive policy we have seen in this country since the Sheriff of Nottingham". He is right, says Moore, and because his party, and the Liberal Democrats, and Labour, have all agreed to the sheriff's extortions, they are letting Nigel Farage play Robin Hood. As the theme song of the TV version used to say, "He cleared up all the trouble on the English country scene, and still found plenty of time to sing".

Readers here do not need to reharse Mr Paterson's arguments, but it can never be said too many times that the current energy policy is unattainable – and at a cost of Ł1.3 trillion, which is roughly the size of the national debt. So obviously, says Moore, Mr Paterson is right to say that we should invoke the clause in the Climate Change Act which allows for its suspension. But, despite his notable trenchancy, Moore thinks he is being quite cautious about what is really happening.

Even if Britain and the whole of the EU were to stick to our emissions targets (which we surely won't), and to hit them (which, actually, we can't), we would still not come anywhere close to what we are told is needed to save the planet. This is for a very simple reason: the rest of the world won’t do it. Last year, carbon emissions per head in China exceeded those of Britain for the first time, and China has more than 20 times as many heads as we do. The EU is responsible for less than 10 percent of global emissions, so when we set our targets we knew – and said – that we were in no position to stop global warming. The point was to set a lead which others would follow.

They haven't. Since the debacle of the Copenhagen Summit of 2009 when the developed world failed to persuade the developing one to join our saintly masochism, this has been obvious. There is a "second commitment period" of the process started by the Kyoto Protocol. New Zealand has withdrawn from it. Canada has repudiated Kyoto altogether.

The only two non-European countries still in the second period are Kazakhstan and Australia, and Australia is now reviewing its commitment. Europe's gesture has proved futile, and is getting ever more expensive, in taxes, bills and jobs. Even the European Commission has spotted this, and is beginning to tiptoe away from the policy.

But not the British parties and policy elites. In August 1914, Sir Edward Grey famously said, "The lamps are going out all over Europe". He was speaking of the war we had inflicted on ourselves. A century later, we are threatening to put them out again, with different motives, but equal folly. Everywhere else, the lamps are staying on.

Isn't it rather extraordinary, Moore concludes, that no mainstream party has dared to point any of this out? Don't they know there's an election on? Is it surprising that voters think: "They're all the same?"