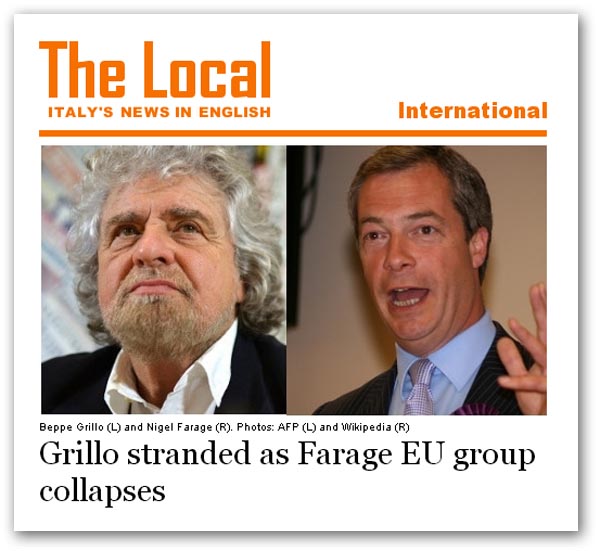 "Ironically – tragically – the biggest threat to Britain's chances of leaving the EU is currently UKIP itself", says Conservative Home. This blog has expressed more or less these sentiments several times, only to have the usual accretion of comments accusing this writer of "bitterness", personal grudges and all the other tedious shallowness that seems to follow any attempt to critique Farage's train-wreck party.

Complete Bastard also has a bash at this, while we're busy with energy, setting the agenda and having the greens squawking with fury, trailing in our wake for once.

As long as UKIP continues to offer train-wreck ideas, though, it will continue to be a liability, leaving real politicians to do the heavy lifting. Meanwhile, as the train-wreck gathering momentum, Farage's Europe of Freedom and Direct Democracy group in the European Parliament has collapsed after one of its national members left, leaving the group below the qualifying threshold.

This is Latvian MEP Iveta Grigule, a politician with a distinctly "colourful" past, as featured in last Monday's Panorama. As the EFDD no longer has members from at seven countries, it cannot continue. That, incidentally, is set to stuff Grillo and his five-star movement, to say nothing of leaving Farage fighting for his millions, his deluxe office suite, and his chauffeur-driven car.

According to the rules, if a group falls below the required threshold, the President, with the agreement of the Conference of Presidents, may allow it to continue to exist until Parliament's next "constitutive sitting", the members continue to represent at least one-fifth of the Member States and the group has been in existence for a period longer than a year.

Since these conditions are not met, this is the end of the group, unless another member, from another member state can be brought in fast. But since Mr Farage has made no friends in the EP, it is less likely than it might have been that anyone will be rushing to his rescue.

However, this is also a blow for Helmer, he of UKIP's aspirational energy "policy" – and part-time leader of the UKIP parliamentary delegation. Perhaps Mr Helmer should have focused more on his working relations with his group colleagues and spent less time on his leisure activities.