Booker: weirder than I can ever remember 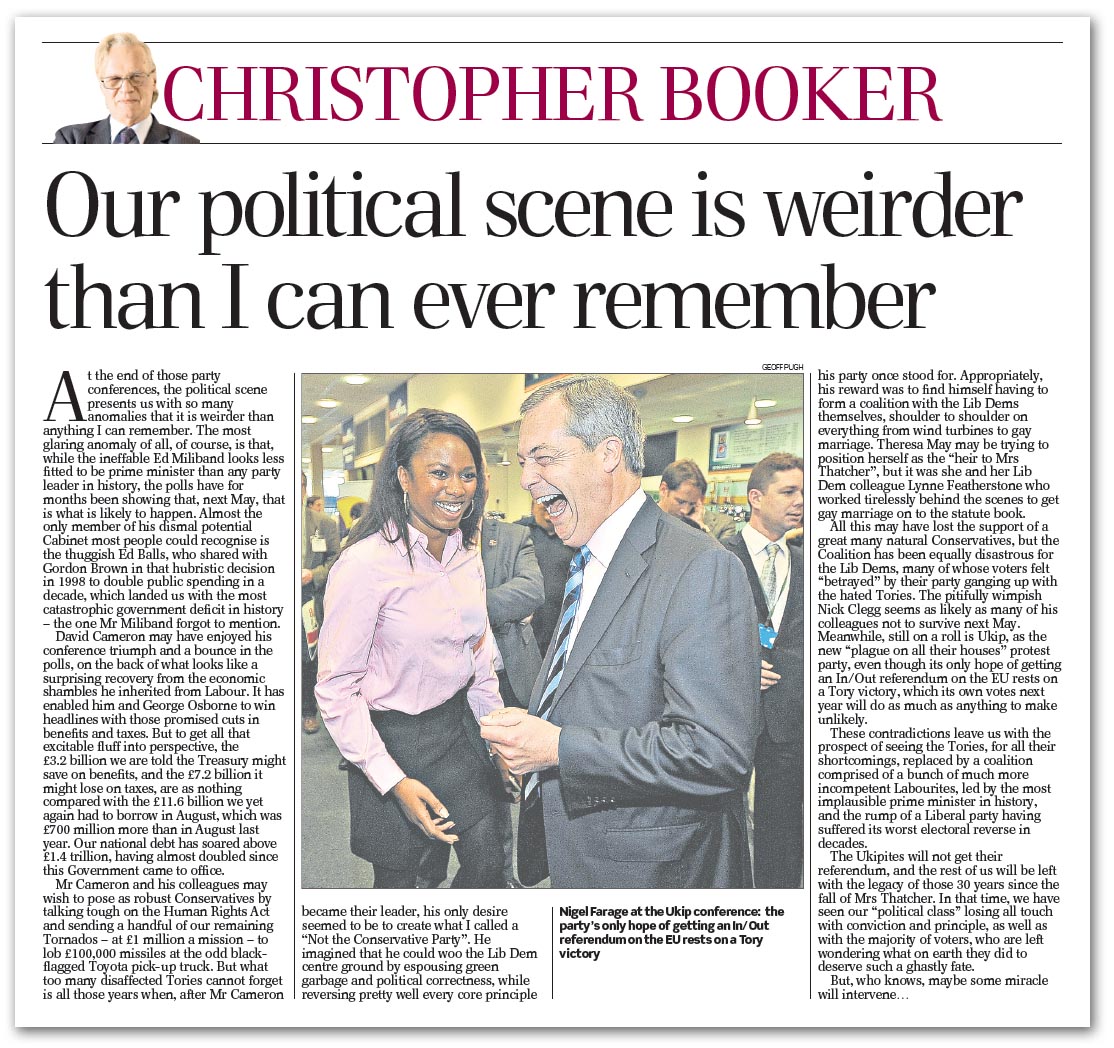 At the end of those party conferences, Booker writes, the political scene presents us with so many anomalies that it is weirder than anything I can remember.

The most glaring anomaly of all, he says, is that, while the ineffable Ed Miliband looks less fitted to be prime minister than any party leader in history, the polls have for months been showing that, next May, that is what is likely to happen.

Almost the only member of his dismal potential Cabinet most people could recognise is the thuggish Ed Balls, who shared with Gordon Brown in that hubristic decision in 1998 to double public spending in a decade, which landed us with the most catastrophic government deficit in history – the one Mr Miliband forgot to mention.

David Cameron may have enjoyed his conference triumph and a bounce in the polls, on the back of what looks like a surprising recovery from the economic shambles he inherited from Labour. It has enabled him and George Osborne to win headlines with those promised cuts in benefits and taxes.

But to get all that excitable fluff into perspective, the Ł3.2 billion we are told the Treasury might save on benefits, and the Ł7.2 billion it might lose on taxes, are as nothing compared with the Ł11.6 billion we yet again had to borrow in August, which was Ł700 million more than in August last year. Our national debt has soared above Ł1.4 trillion, having almost doubled since this Government came to office.

Mr Cameron and his colleagues may wish to pose as robust Conservatives by talking tough on the Human Rights Act and sending a handful of our remaining Tornados – at Ł1 million a mission – to lob Ł100,000 missiles at the odd black-flagged Toyota pick-up truck. But what too many disaffected Tories cannot forget is all those years when, after Mr Cameron became their leader, his only desire seemed to be to create what I called a "Not the Conservative Party".

He imagined that he could woo the Lib Dem centre ground by espousing green garbage and political correctness, while reversing pretty well every core principle his party once stood for. Appropriately, his reward was to find himself having to form a coalition with the Lib Dems themselves, shoulder to shoulder on everything from wind turbines to gay marriage.

Theresa May may be trying to position herself as the "heir to Mrs Thatcher", but it was she and her Lib Dem colleague Lynne Featherstone who worked tirelessly behind the scenes to get gay marriage on to the statute book.

All this may have lost the support of a great many natural Conservatives, but the Coalition has been equally disastrous for the Lib Dems, many of whose voters felt "betrayed" by their party ganging up with the hated Tories. The pitifully wimpish Nick Clegg seems as likely as many of his colleagues not to survive next May.

Meanwhile, still on a roll is UKIP, as the new "plague on all their houses" protest party, even though its only hope of getting an "in-out" referendum on the EU rests on a Tory victory, which its own votes next year will do as much as anything to make unlikely.

These contradictions leave us with the prospect of seeing the Tories, for all their shortcomings, replaced by a coalition comprised of a bunch of much more incompetent Labourites, led by the most implausible prime minister in history, and the rump of a Liberal party having suffered its worst electoral reverse in decades.

The Ukipites will not get their referendum, and the rest of us will be left with the legacy of those 30 years since the fall of Mrs Thatcher. In that time, we have seen our "political class" losing all touch with conviction and principle, as well as with the majority of voters, who are left wondering what on earth they did to deserve such a ghastly fate.

But, who knows, maybe some miracle will intervene …