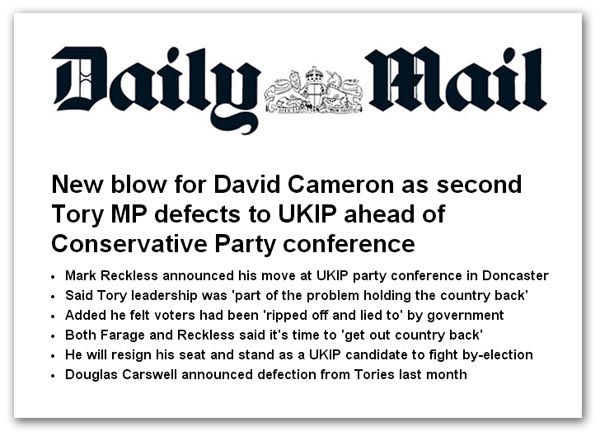 I am sure Mark Reckless thinks he's doing the right thing in joining Douglas Carswell. But, if there is to be any chance of having a referendum in 2017, then the preferred option must be a Conservative government.

If you do not believe Mr Cameron will deliver the goods, then presumably there must be some logic in destabilising the Conservative party, even if the short-term effect is to open the way for Mr Miliband. That, at least, will stop us losing a referendum – we simply won't get one.

Yet this is the man who told the Guardian late last month that he would be staying with the Tories to help David Cameron ensure he could deliver his promise of an EU referendum.

What is not clear, though, is where the end game lies - Helen Szamuely seems equally puzzled. Mr Reckless says he will retire as an MP and, following in the shoes of Mr Carswell, will stand for re-election. If he and Carswell survive, and then win again at the general, they will hold down former Conservative seats and thereby weaken the party further.

But if Mr Reckless says, "I want to get our country back", he is doing his very best to delay the process. But then, he tells us that he cannot keep his promise to control immigration as a Conservative, but could as a UKIP MP. This man is well named.