Rotherham: getting to the core issues 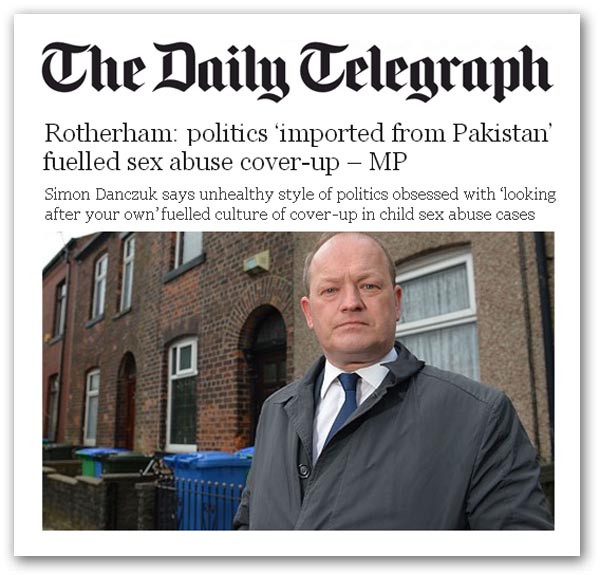 Rather in the manner of Samuel Johnson commending women preachers and dogs walking on two legs, whenever we see evidence of sentient thought in an MP, it should be mentioned and, as far as possible, encouraged.

Into this category storms Simon Danczuk, the Labour MP for Rochdale who wrote in the Sunday Telegraph and has a piece about him in the daily paper today.

What we find interesting about his pieces is his depth of understanding, portrayed. In his Sunday piece, for instance, he bemoans the lack of knowledge about the victims, but then goes on to write:

This dearth of understanding does not only relate to victims. Too little is known about the perpetrators of these crimes and too frequently I get the impression that politically correct reasons prevent authorities from trying to find out more or challenge these people.

Some are poor men from rural Kashmiri communities, or second- or third-generation Kashmiris or Pakistanis who have developed or inherited an openly violent misogyny. I visited one abuser in prison ľ he'd attacked a female prostitute with a hammer and was clearly mentally ill. I asked the family about his wife, who'd come over from Kashmir two years before and spoke no English, only to be told that she knew he was in prison but wasn't aware of the crimes he'd committed.

No one on the ground would even begin to suggest that the whole extent of this problem is related to Kashmiris, or even Pakistanis. But local knowledge tells me that, of the problems within problems, we most definitely do have a Kashmiri problem. Furthermore, the Pakistanis are most often Pashtun, a tribal conglomerate which spans the Afghan and Kashmiri borders, accounting for more than 27 million people on the Indian sub-continent, out of 50 million total.

In other words, whatever else problems we might have, we do have a Pashtun problem, which spreads into unrelated (and even geographically distinct) tribes which have similar "honour codes", such as the Pashtunwali. And this is why I have been writing in these terms, and led Booker.

This is a terribly difficult subject to write about, especially as one is immediately challenged by people who want the whole extent to the problem to be about Islam, and will not countenance any analysis which suggests that this might be a multi-factoral of which Islam may be a part, but often a symptom rather than the primary cause.

A further difficulty is that, because of the vastness of the subject, and its complexity, one is reduced to writing in generalities ľ and to relying on a broader understanding of issues that often simply isn't there. We can't assume anything and we often have to start from scratch.

When discussing tribalism, for instance, the word itself triggers a huge range of perceptions. The word, in fact, means entirely different things, in different contexts, so much so that you cannot transpose without causing a great deal of confusion.

Within the context to which we refer, tribalism is a [primitive] system of governance, which pre-dates the nation state, and many of the religions which we know today (including Islam). As such, there are huge variations in how tribalism is exercised, which are of some considerable relevance here.

In general terms though (a dangerous phrase, if ever there was one), we to two broad splits, as between tribes of nomadic origin which tend to be governed on an egalitarian basis, and settled tribes which tend to rely on hierarchical structures.

As to the Pashtuns, the hill and the desert tribes tend to be nomadic and therefore egalitarian, suffering weak tribal leaders and no overarching governmental systems. It is said of the Pashtuns that each man is his own king ľ their ruling councils, the jirga have no powers and even the leader is primus inter pares, with the accent on pares.

Of some of this we have already written, and of the Pashtunwali "honour code" which pre-dates Islam and is a far more important behavioural driver.

What we haven't explored is some of the underlying reasoning ľ as to why the tribes should differ so widely. Essentially, though, there is a strong strand of logic behind the adoption of the different structures: the dispersed nomadic tribe must have self-regulating sub-units, while the settled tribe lends itself to the hierarchical structure.

As to the nomadic tribe, it does not value land, or even property to any great extent. Nomads own what they can carry, and the "capital" of the tribe rests with its people, and on the production of healthy sons. In this context, the women become machines for producing capital, whence their ownership and control become vital to the survival of the tribe.

In this context, it is inevitable that there will be an "honour code" which tightly regulates the ownership and use of women, which essentially treats them as property.

These basics really do carry over into immigrant communities, so that the transplant of a nomadic structure, with weak community governance and a strong code relating to women is bound to have adventurous males looking outside their tribe for sexual gratification, with their behaviour not breaching any tribal laws.

It is on this that Danczuk makes today's contribution, talking of politics "imported from Pakistan" fuelling the sex abuse cover-up.

The thing to note here is that he is talking of politics and not religion, and while the two are linked, they do also have their separate and distinct influences. He thus says that the elements of Pakistani political culture itself were partly to blame for the cover-up, speaking of "cultural issues" around the way politics are done in the Asian community "which have to change".

He said he had personally come under pressure from Asian councillors and members of the community for speaking out as well as being warned by prominent figures in his party, pointing to the way in which two Muslim councillors in Rochdale had provided character references for one of the perpetrators of the Rochdale abuse.

"Politics are done differently in Pakistan, it is a cultural difference we have imported some of that into some of these northern towns and cities and I think we have to face up to the fact that we can't carry on doing politics like that", Danczuk adds. "It is not healthy and the direct consequence is that we end up having to tackle issues like has been faced in Rotherham".

Significantly, in all his references, including an authored piece in The Mail, Danczuk does not mention, far less blame Islam. The closer people get to these multifarious problems, it seems, the less inclined they are to attribute them to religion.

After all, the core of this scandal is not the fact of sex abuse, per se, but the scale and duration, and the fact that the communities covered it up.

Danczuk describes the behaviour of Asian politicians as "looking after your own" within the community, adding, "Being an Asian councillor isn't an easy job compared to being a white councillor, the pressure on some of the Asian councillors is immense".

"They will get phone up at midnight, the amount of casework compared to white areas is completely different, the community almost owns you ľ you are expected to deliver or they will vote you out", he says. "It is a mild form of intimidation ľ if you don't conform you will be voted out".

But this is also the sort of behaviour you would expect from a tribal society, one of nomadic origins. And there's where Danczuk has got it right ľ this is politics "imported from Pakistan".