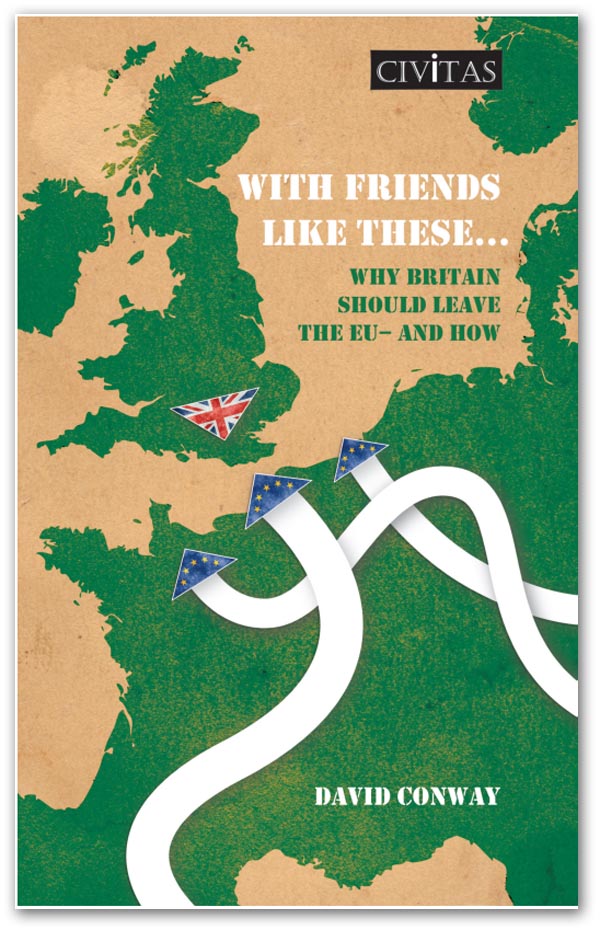 In setting the scene in his new book telling us how to get out of the EU - published by Civitas today - Dr David Conway is at pains to recall "what West German Chancellor Konrad Adenauer reportedly told the French Prime Minister Guy Mollet at the height of the Suez crisis".

The background is to the joint incursion of France and Britain into Suez, at the point at which the United States "had forced them to abandon their military operation". Conway thus offers a verbatim quote, the source of which he references to Keith Kyle's book Suez: Britain's End of Empire in the Middle East, originally published in 1991, which is probably its first appearance in English translation.

This has Adenauer saying to Mollet:

France and England will never be powers comparable to the United States and the Soviet Union. Nor Germany either. There remains only one way of playing a decisive role in the world; that is to unite to make Europe. England is not ripe for it but the affair of Suez will help to prepare her spirits for it … Europe will be your revenge.

In fact, the original source is French Foreign Minister, Christian Pineau, who wrote it in his book 1956/Suez (Le temps des révélations) published in French on 1 Jan 1976 by Robert Laffon in Paris (p.191), twenty years after the event – of which there is no official record.

Initially, in the original version of this review, I misread the source attribution that Conway gave – a mistake easily made by the author's use of endnotes rather then footnotes, and my own eyesight problems (since addressed with a hospital visit - see also my Disqus comment), ending up in my accusing him of fabricating the source. For that I apologise.

However, I then went on to accuse him of "sloppy, dishonest … scholarship", which I do not withdraw. Conway uses a secondary source (which we all do occasionally, as a short cut – we use a secondary , but different source in The Great Deception for the same quote), but in this event he bases a major part of his argument on that single source. Given the pivotal nature of the quote, a reputable scholar would have gone to the primary source, and then triangulated with corroborative evidence.

As written, he uses this single quote as the foundation of an argument that the EU is a German-dominated construct, established with malevolent intent by Adenauer and thence developed with a view to constructing a Europe "free of British influence over foreign and defence policy irrespective of its membership status". Yet, even in the context of the Kyle book, the quote suggests that Adenauer was more anti-American than anti-British.

The immediate source from which the quote is lifted should have warned Conway to take care. Kyle explicitly notes that Pineau is working from memory twenty years after the event, on issues for which there is no independent corroborative record. Pineau's memory is sometimes demonstrably fallible, says Kyle.

Despite that, we see Conway towards the end of his modest book (of 157 pages), argue that Britain's best "negotiating tactic" is to adopt what he calls the "Adenauer gambit". With Adenauer established as the man in the black hat – primarily on the basis of the Pineau quote - it becomes legitimate to turn the tables on him (as a proxy for Germany), by leveraging the desire of the EU member states to secure agreement on one deal by linking it with another – in the manner that Adenauer secured early post-war recognition of West German sovereignty.

Conway actually needs to learn what a "gambit" is but, in terms of specifics, he is advocating a particularly inadequate idea by ex-UKIP and now Tory MEP, Campbell-Bannerman, as his preferred mechanism for leaving the EU, trading agreement on this in return for our agreeing to a treaty on the euro.

Bannerman's idea is called "EEA-lite", which he suggests can be introduced as a cut-down form of the EEA Agreement, oblivious to the fact that, once you start breaking into the original agreement, the negotiations are thrown wide open and they could end up taking years - or even decades - with unpredictable results.
When we get to the meat, though, we find Conway destroying his own case. He acknowledges that, outside the "context of negotiations needed to resolve the euro-crisis", "the prospect remains very small that Britain might be able to obtain some such new settlement as EEA lite".

This, of course, is what we have been trying to tell Campbell Bannerman, but that man is on "transmit mode" only. He simply isn't listening. However, Conway comes to his rescue with a tale that Britain is "about to acquire a rare window of opportunity". And since the EU is poised to launch a new treaty, that gives him the leverage that is so necessary.

But in his second example of shoddy scholarship, it is evident that Conway relies (once again) entirely on secondary sources, specifically, articles from The Daily Telegraph and Der Spiegel, to inform him on whether there might be negotiations on a new treaty.

And while indeed there were distinct signs of a treaty in the offing last year, a closer look at primary sources from this year strongly indicate that the idea of a treaty is firmly on hold. The "window of opportunity" no longer exists. Even if EEA-lite was a viable option, therefore – which it isn't – its prospects now are non-existent.

Here then, Dr Conway betrays a further lack of scholarship.  In his book, he has taken us laboriously through four options – the Norway, Swiss, Turkish and WTO options – only to dismiss each in turn as coming with "very substantial drawbacks". This is how he comes to recommend Mr Campbell Bannerman's EEA-lite. It is his fifth option.

But if there is no window of opportunity, Conway has nowhere to go. He does not have a fallback, which means that his entire endeavour of telling us how we should leave the EU is wasted. He doesn't have a way out.

His biggest mistake, though, is to have me as a "vociferous" champion of the Norway option (while Hannan is more gently a "fervent advocate" of the Swiss option). He thus completely fails to realise that I am not actually championing the Norway option as my exit plan. I am actually advocating an option that he hasn't even considered, despite it being readily accessible here.

What I have done, and what Conway should have done, is recognise that all options have "very substantial drawbacks", so we need an interim solution to get us out of the EU with minimal difficulty, thus opening the way to define a longer-term solution.

It is this concept of a two-stage solution which defines Flexcit, of which Conway seems completely unaware, and which "transmit mode" Bannerman chooses to ignore. Thus, Conway ends up producing a sterile, useless book, over which Bannerman then preens on Twitter, both of them driving hand-in-hand up a blind alley.

Probably, the only good thing about Conway's book, therefore, is the first part of the title – alluding to the lack of value of the production. With friends like Civitas sponsoring such low-grade material, we have another waste of time. It takes us no further forward in agreeing an exit plan and simply panders to a shallow ego on the back of flawed scholarship.

Fortunately, the europhiles – for the moment – seem just as crass, but we really cannot afford to waste time and effort on such flawed work.