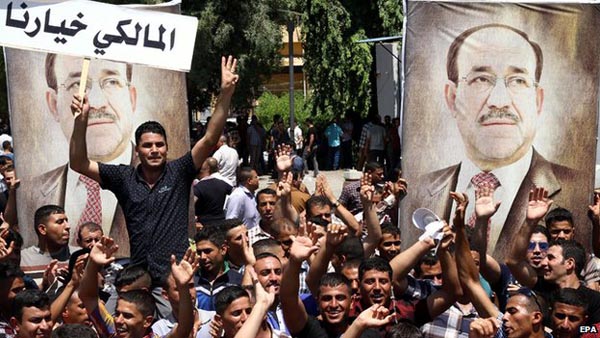 There seems to me a significant difference between UK and US attitudes to Iraq, and hence the reporting of events in this troubles state. The UK focus tends to be on the US response in, and responsibility to the region, and in particular on the performance and perceived failings of President Obama.

The US perspective, by contrast, appears much more nuanced, with a better grip of internal Iraqi politics, and much more discussion of the political situation in the media. This makes the US position much more three-dimensional, leaving the UK media devoted to reporting of almost child-like superficiality, concentrating on the "biff-bam" and human interest elements.

For an appreciation of events, therefore, we go not to The Times or other purveyors of superficiality, but to the LA Times and others, which have interesting observations about Obama's tactics in delaying assistance to Iraq until the political situation was resolved.

The particular issue has been Nouri Maliki, once the saviour of Iraq, but a politician who has become increasingly authoritarian over term, consolidating his hold on power to the point where he alone held the key portfolios of defence, interior and national security for the past four years.

His behaviour, in a country fractured by sectarianism, has increasingly disturbed the Sunni minority, to the extent that it has been prepared to tolerate and even support the ISIS insurgency, leaving Maliki increasingly isolated and under pressure.

Now that Haidar al-Abadi has been nominated as prime minister-designate, there is a glimmer of hope that the blockage at the heart of Iraqi politics is capable of being resolved, opening the way to a more inclusive administration and the reintegration of the Sunnis into government.

Traditionally, it has been the minority Sunni tribes which have provided the civil servants, the military officers and the administrators, providing the backbone to Saddam Hussein's Ba'athist party.

The progressive exclusion of Sunnis from Maliki's administration may possibly explain the poor performance of the Iraqi Army, still with a strong Sunni element in its officer corps. Effectively, deserted by its officers, the Army collapsed, leaving the ISIS surge unchallenged.

That the Iraqi Army, properly led, can deal with insurgents, is beyond doubt, its formations having performed creditably in a number of operations. And a return of the Army to the field, committed to the support of the Baghdad government, will doubtless have a devastating effect on the insurgency.

Of the British press, though there are obvious exceptions to the superficiality. In the Financial Times, for instance, there is a grown-up appraisal of the state of Iraqi politics.

One hopes that this is in recognition that the ultimate solution of the crisis in Iraq rests in Baghdad restoring its authority, regaining the broader consent of the community. Certainly, without that resolution, any external intervention is likely to be temporary in effect, and less effective than it might otherwise be.

The Guardian also attempts an analysis, although one senses it is behind the curve. While it tells us that the political crisis is intensifying, it may be that the worst is already over, especially as Iran has endorsed Haider al-Abadi's nomination.

It is a given that no Iraqi prime minister can survive without at least the tacit support of Tehran, and in the past Maliki has been accused of being an Iranian puppet. If Iran has withdrawn support from him, his days must surely be numbered.
If al-Abadi can make peace with the Sunni community, Iraq may soon be back on the road to recovery. And all this, of course, makes the shrieking of the British media and the Westminster warriors somewhat irrelevant. The humanitarian and military position needs to be contained, but beyond that, a watching brief is in order.

By far the best, most enduring solution to this crisis will be Iraqi-led. We interfere in the fragile politics of the region at our peril, so our best counsel, beyond the immediate help being given, is to watch and wait, giving such help to the Baghdad government as is needed and requested.

If from the crisis emerges a stronger, more inclusive government, then the lives that will be saved in the long-term will far exceed any short-term gain that might be achieved from any populist, gesture politics, that disrupt the political process.

And with that, Mr Cameron is best off continuing his holiday. Refusing to be panicked into sending in ground troops, Washington is displaying a far more deft touch over this issue than it has been on Ukraine. A bout of hyperactivity from Whitehall at this stage, therefore, would do more harm than good.