Booker: the insult to the countryside 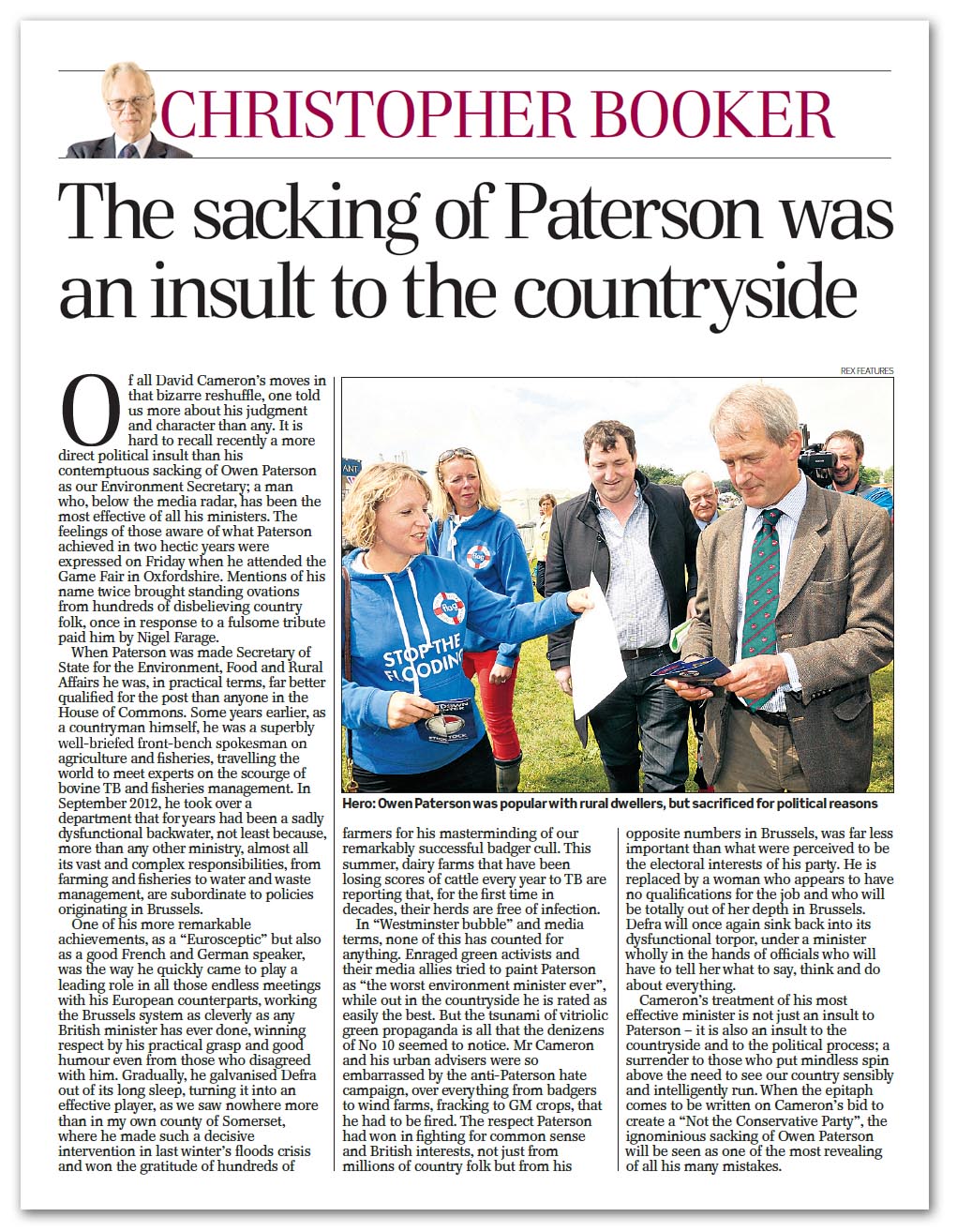 This week, Booker takes up cudgels on behalf of Owen Paterson. Of all David Cameron's moves in that bizarre reshuffle, he writes, one told us more about his judgement and character than any. It is hard to recall recently a more direct political insult than his contemptuous sacking of our Environment Secretary; a man who, below the media radar, has been the most effective of all his ministers.

The feelings of those aware of what Paterson achieved in two hectic years were expressed on Friday when he attended the Game Fair in Oxfordshire. Mentions of his name twice brought standing ovations from hundreds of disbelieving country folk, once in response to a fulsome tribute paid him by Nigel Farage.

When Paterson was made Secretary of State for the Environment, Food and Rural Affairs he was, in practical terms, far better qualified for the post than anyone in the House of Commons. Some years earlier, as a countryman himself, he was a superbly well-briefed front-bench spokesman on agriculture and fisheries, travelling the world to meet experts on the scourge of bovine TB and fisheries management.

In September 2012, he took over a department that for years had been a sadly dysfunctional backwater, not least because, more than any other ministry, almost all its vast and complex responsibilities, from farming and fisheries to water and waste management, are subordinate to policies originating in Brussels.

One of his more remarkable achievements, as a "Eurosceptic" but also as a good French and German speaker, was the way he quickly came to play a leading role in all those endless meetings with his European counterparts, working the Brussels system as cleverly as any British minister has ever done, winning respect by his practical grasp and good humour even from those who disagreed with him.

Gradually, he galvanised Defra out of its long sleep, turning it into an effective player, as we saw nowhere more than in my own county of Somerset, where he made such a decisive intervention in last winter's floods crisis and won the gratitude of hundreds of farmers for his masterminding of our remarkably successful badger cull.

This summer, dairy farms that have been losing scores of cattle every year to TB are reporting that, for the first time in decades, their herds are free of infection.

In "Westminster bubble" and media terms, none of this has counted for anything. Enraged green activists and their media allies tried to paint Paterson as "the worst environment minister ever", while out in the countryside he is rated as easily the best.

But the tsunami of vitriolic green propaganda is all that the denizens of No 10 seemed to notice. Mr Cameron and his urban advisers were so embarrassed by the anti-Paterson hate campaign, over everything from badgers to wind farms, fracking to GM crops, that he had to be fired.

The respect Paterson had won in fighting for common sense and British interests, not just from millions of country folk but from his opposite numbers in Brussels, was far less important than what were perceived to be the electoral interests of his party.

He is replaced by a woman who appears to have no qualifications for the job and who will be totally out of her depth in Brussels. Defra will once again sink back into its dysfunctional torpor, under a minister wholly in the hands of officials who will have to tell her what to say, think and do about everything.

Cameron’s treatment of his most effective minister is not just an insult to Paterson – it is also an insult to the countryside and to the political process; a surrender to those who put mindless spin above the need to see our country sensibly and intelligently run.

When the epitaph comes to be written on Cameron's bid to create a "Not the Conservative Party", Booker concludes, the ignominious sacking of Owen Paterson will be seen as one of the most revealing of all his many mistakes.