Ukraine: the fate of MH17 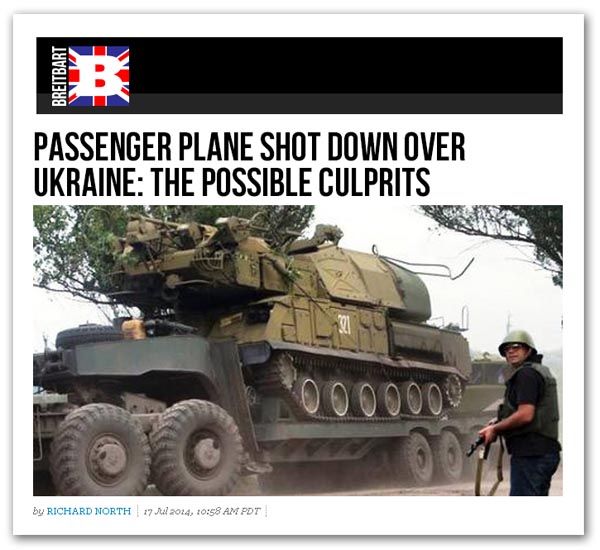 The loss of Malaysian passenger flight MH17, a Boeing 777-200 airliner, with 295 people on board, near Donetsk, Ukraine, where pro-Russian rebels have been fighting Ukrainian government forces for several weeks, has been blamed on a missile strike.

The downing has been attributed to a Russian-built "Buk" anti-aircraft missile (translated as "Beech"), a medium-range missile designated by NATO as the SA-11 "Gadfly". If so, this is a credible report. As Breitbart reports, the missile is on the Ukrainian Army inventory, it has been reported in the area (see recent picture, above). Breakaway fighters have claimed to be in possession of them, after Military unit A1402 (Donetsk SAM regiment) was captured on 29 June or thereabouts (more here).

The missile system has both the range and the capability to track and bring down a modern airliner, having been used successfully on a Russian Tupolev Tu-22M strategic bomber during the 2008 South Ossetia war. But only now, 24 hours after the first reports started coming in, is Reuters beginning to pick up what has been going on. 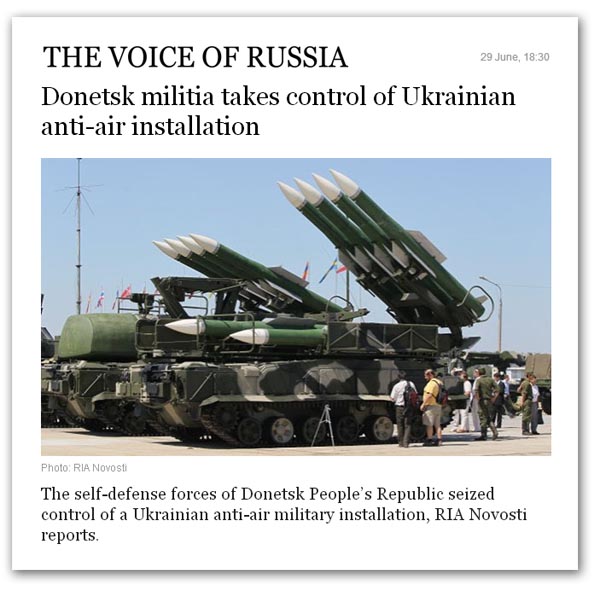 If the Malaysian aircraft has been shot down by a missile, one possible explanation is that it was an accident, brought about by a nervous Ukrainian military, fearing a Russian bomber attack – or even airborne invasion. If that was the case, it will not have been the first time a civilian airliner has been accidentally shot down by an anti-aircraft missile.

On 3 July 1988, Iran Air Flight 655, an Airbus A-300, was shot down by the United States Navy guided missile cruiser USS Vincennes in the Arabian Gulf, killing all 290 on board, including 66 children and 16 crew.

Nor is this sort of tragedy a stranger to the region. On 4 October 2001, a Russian Tupolev-154 airliner exploded and plunged into the Black Sea, killing all 78 people on board. Terrorism was immediately suspected but US sources said the aircraft had been shot down by a misfired Ukrainian missile.

Flight 1812 from Tel Aviv to Novosibirsk, in Siberia, left Tel Aviv's Ben Gurion airport shortly before 10am with 66 passengers, including two babies, and 12 crew. As it flew off the Black Sea coast, it blew up plunging 35,000 feet to the water. Ukrainian officials later admitted that a missile fired by their forces had shot down the airliner.

Another horrific possibility is that aircraft, on a flight from Amsterdam to Kuala Lumpur having left about noon yesterday, was shot down by a renegade Ukrainian faction, seeking to raise tension in the region and to embarrass the Ukrainian government.

The missile itself is sophisticated, but comes in a ready-to-launch package, typically on a tracked vehicle. It can also operate with a radar tracker on a separate vehicle. But, although the launcher is a substantial piece of equipment, it is a semi-automatic system and simple to operate. A system was sold to the Hezbollah in Lebanon in 2013 – although destroyed by the Israeli Air Force before it could be brought into use.
Questions will be asked as to why the Malaysian passenger jet was overflying what amounts to a war zone, with a Ukrainian Sukhoi Su-25 ground attack aircraft having on Wednesday been downed by an air-to-air missile, claimed to have been fired from a Russian fighter, while another Su-25 was damaged by a hand-held anti-aircraft missile (known as a "manpad"), presumed to have been fired by separatist insurgents. There is now doubt about both these reports, though, as these may also have been SA-11 strikes.

There is in any case no question of a "manpad" having downed the high-flying Boeing – it simply would not have the range and a jet the size of the Boeing could possibly survive the impact of a man-portable missile.

Nevertheless, the Mail initially described the Russian-made BUK as a "shoulder-launched surface-to-air missile" that "can be packed into a golf bag and assembled and fired very rapidly by one person with minimal training".  The Sun, however, has no doubts about the nature and source of the weapon. It's Putin's missile, it says, despite the equipment also being used by the Ukrainians, and the report of a unit being captured by insurgents. 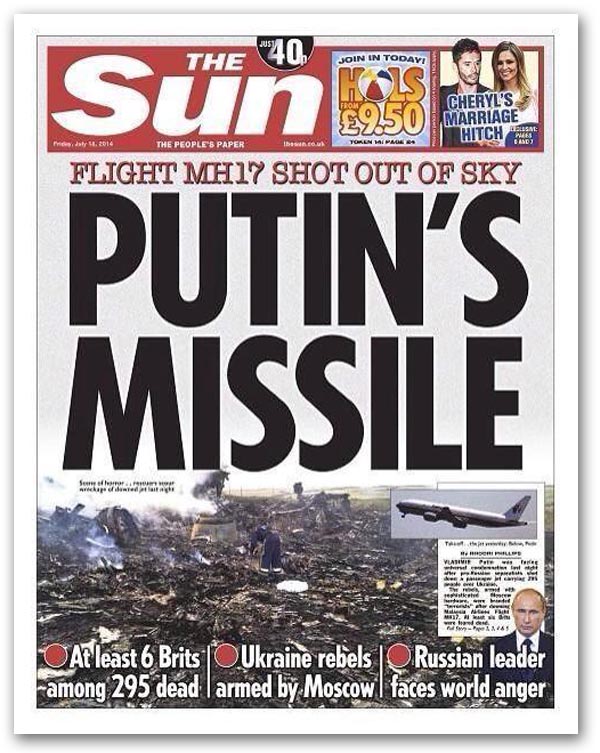 Ominously, the TASS News Agency has been saying saying that a Ukranian An-26 military transporter was brought down last Monday on the outskirts of the town of Torez, with eyewitnesses saying it was hit by a missile.

The downing was attributed to "Militiamen of the self-proclaimed Donetsk People's Republic" (DPR), and is the second of these transports reported to have been brought down. Previously, on 14 July, militiamen of the self-proclaimed Luhansk People's Republic had also claimed an An-26 of the Ukrainian Air Force. They too attributed the downing to a missile strike. 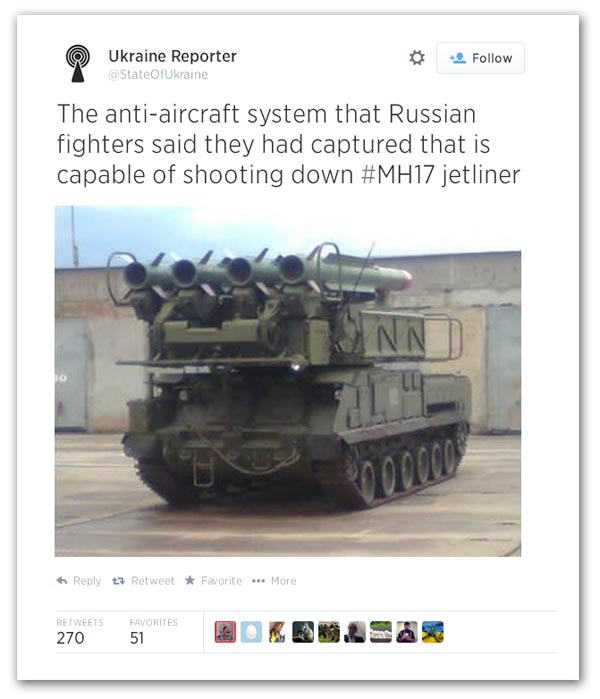 The loss of these two aircraft suggest a more substantial capability in the hands of the breakaway Ukrainian militia, which adds credibility to claims that the Malaysian aircraft suffered an SA-11 missile strike.

Furthermore, according to a report in the Kiev Post, which says it has obtained transcripts of conversations between insurgent groups, the aircraft was shot down by a group of Russian-backed Cossack militants near the village of Chornukhine, Luhansk Oblast, some 80 kilometers north-west of Donetsk.
The transcripts are claimed to be of recordings of intercepted phone calls between Russian military intelligence officers and members of "terrorist groups", released by the Ukrainian security agency (SBU). One phone call apparently was made at 4:40 p.m. Kiev time, or 20 minutes after the Flight MH17 crashed. It records comments by Igor Bezler, who the SBU says is a Russian military intelligence officer and leading commander of the self-proclaimed Donetsk People's Republic. He admits to his group having shot down the aircraft.
However, there are some suggestions that the aircraft was off course and should not have been flying over eastern Ukraine. Its more normal routing is south of Ukraine, over the Black Sea. However, there is a NOTAM (notice to airmen) in force for South Ukraine/Black Sea (with an FAA version in force since April). Although no equivalent warnings for eastern Ukraine appear to have been issued, a report says that there was a Eurocontrol restriction on flying below 32,000ft. The aircraft was reported at 33,000ft.

If investigators are allowed access to the crash site, it should be simple to confirm the proximate cause of the crash. Although a major fire has been reported, pictures from the scene show substantial pieces of wreckage, suggesting that the "black box" flight recorder may well have survived. Late reports suggest it has already been recovered and sent to Moscow. There will also be a cockpit voice recorder to recover.

These, plus forensic tests of residues found, examination of shrapnel and damage patterns (and even acoustic analysis of the cockpit voice recorder, if recovered)  will relatively easily show how the aircraft was downed.
With the Russians, the Ukranians and the militiamen all fielding the same weaponry, though, proving whose finger was on the trigger may prove harder - unless, of course, the 'phone intercepts prove genuine. And even then, that leaves open the possibility of the incident being a ghastly accident, with the aircraft having been mistaken for a military transport.