Michael Fallon: and how is he a eurosceptic? 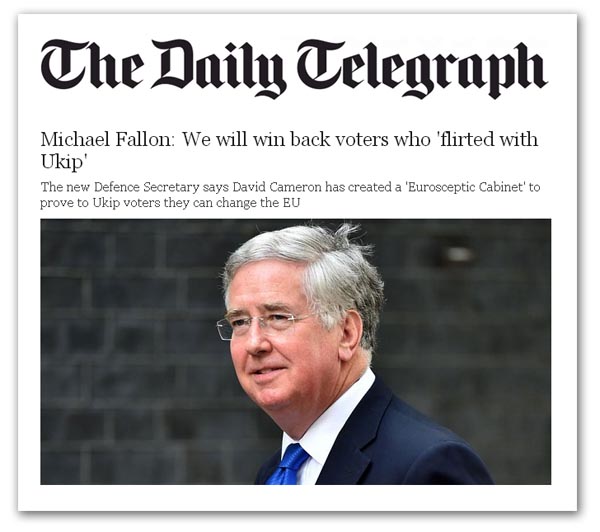 We are being told by Michael Fallon, the new Defence Secretary, that Mr Cameron has created a "Eurosceptic Cabinet" to prove to UKIP voters they can change the EU.

This is from a man who, according to Wikipedia, was active in the European Movement as a student and the "yes" youth campaign in the 1975 referendum and has never since given any serious indication that he is opposed to UK membership of the EU.

More recently, writing for Conservative Home on UK membership of the EU, he stepped away from both the status quo and the idea of leaving, backing David Cameron who had "rejected the defeatism of both approaches, and has set out a path for a reformed Europe".

In other words, Fallon – although counted as on the "right" of the party - is just another woolly Tory Europlastic, supporting the standard "reform" fudge, with absolutely no intention of seeing us leave the EU. Only in the debased sense of the word can he be considered "Eurosceptic" but, by any rational measure, the man is a dyed-in-the-wool Europhile.

If Mr Fallon is an example of this "Eurosceptic Cabinet", that he thinks it is going to woo UKIP voters back to the Tories, then he is not just mistaken – he is seriously deluded.