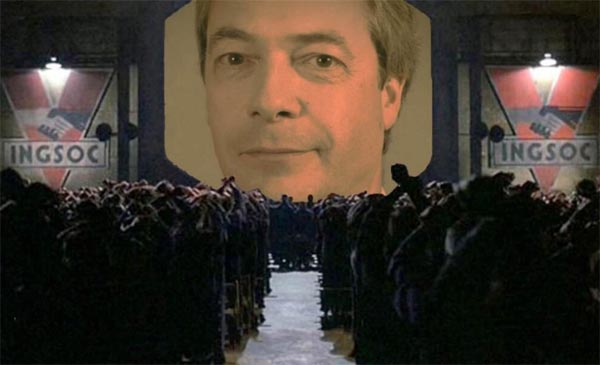 Unseen to the human eye are a raft of e-mails taking me to task for publishing this piece, analysing the performance of UKIP at the Newark by-election. These lift the lid on an interesting phenomenon in the "eurosceptic" community, whereby some will accept my expertise as a political analyst except when it comes to UKIP. Then, any critical comments are, perforce, driven by "personal prejudices" (or worse), which are leading me to write "spiteful offensive rubbish". This is the sort of thing being freely circulated:


For many years now I have been increasingly irritated and diasppointed (sic) to note the ridiculous drivellings you seem to be unable to stop yourself from spouting whenever you write about anything to do with Nigel Farage. Like the other bitter Doctorate, ....Sked, who gets weeled (sic) out at intervals to display his idiotic ranting bitterness at elections, ...say the word 'Farage' and it produces irrational rabid spasms of invective and pure poison.

Your personal hatred of Nigel Farage shines brilliantly for all to see, like a laser beam through fog, and, like sick on the pavement, the bile and poison you regurgitate is not a pretty sight!

It shows you to be bitter and shallow to a degree which is unbecoming (to put it very mildly) for an "independent academic"; rather, it shows your "independent" mind is sullied and contaminated, confused and confounded with impure, unscientific thoughts - which we can observe spilling-over into poor / inadequate analysis and comment whenver (sic) Nigel Farage is mentioned by you.

Never mind that, over a period of four years I actually shared a desk with Farage in Strasbourg. Working with him over those years of extraordinary stress, I probably got to know him far better than most and am uniquely qualified to comment on him. As to him "firing" me, he didn't. I resigned. But, if I hadn't then, I would almost certainly have done so later. Therefore, I don't hold any particular grudge against the man – this sort of thing happens, especially in politics.

Where I have marked the cards of Farage, though, is in how he manoeuvred me out of the party, and then sought to fire me from my post in the European Parliament. It is such things which are so revealing about a man's character. I do not particularly dislike him for what he did – others have done much worse to me. But getting an administrator to do his dirty deed, rather than facing me himself, betrayed a moral cowardice. And that is why I dislike him as a person, why I have no respect for him.

However, all that was over ten years ago. I'd long got over it until the party faithful started resurrecting it. It is they, after all, who keep bringing up the past, again and again and again.  They simply cannot let go.

Nevertheless, I did miss the political platform UKIP afforded me – although less so after the party took such disastrously wrong turns. And I do regret not being close to the helm, where I could have influenced things, and stopped Farage making such a mess of things. But then, that's why Farage sought to get rid of me in the first place.

Anyhow, I've got used to working outside UKIP and have acquired my own independent voice through this blog and elsewhere. And if you look at some of my earlier pieces, you will see that I have been quite supportive of Farage and UKIP. I am quite capable of working out the difference between Farage the man and Farage the politician.

Only once UKIP started taking disastrously wrong turnings, and Farage the man forgot to keep his private life separate from his politics, have I become increasingly critical of both man and party. But it is Farage who cannot seem to make the distinction between public and private.

As this site is primarily about the EU,  it was inevitable that I should write about UKIP - more than most before the party took off.  But it is perhaps because of my former position in the party, and my insight into Farage, that make it so necessary for UKIP supporters to react the way they do. If they could not put my writing down to "personal prejudice", or some such, they would have to take note of what I've been saying, and take it seriously. That would never do.
However, like it or not, the party has changed since my day, and for the worse. And I'm far from being the only person to have noticed. We have a piece from Dan Hodges that says as much.

Not knowing Farage as well as I do, he's perhaps kinder about the party leader than I would be. Nevertheless, Hodges gets much the same sort of treatment that I get, although since he cannot be accused of "personal prejudice", the UKIP supporters have to dream up another reason to hate him. But it all boils down to the same thing: Ukippers don't do criticism – the Cult of Farage must remain inviolate.

Then we have that intellectual heavyweight Paul Nuttall tell us, "I don't really buy into abstract ideologies", in response to the complaint that new UKIP doesn't have an "ism".

With that astonishing remark, Nuttall illustrates the boorish, anti-intellectual character of UKIP, the change that Hodges has picked up. That is why so many people thoroughly dislike the party, why it didn't succeed at Newark, why it is a busted flush and why it is going nowhere at the general election.

The fact is that nUKIP is now a really nasty party, newly populated by a phalanx of rather unpleasant people, reinforcing those who were already there. But this is a party in which Farage is quite at home, where his drunkenness, sexual predation, disloyalty and thuggishness are regarded as admirable traits. It is a party made in Farage's image, with which he is progressively destroying the reputation of euroscepticism.

The thing is, to observe this is not "personal prejudice". It is a cold, impersonal assessment of the reality - "impersonal prejudice", if you like, a prejudice against a man who has wrecked the hopes of many and is almost single-handedly destroying a once fine political party.