UKIP: the party needs an "ism" 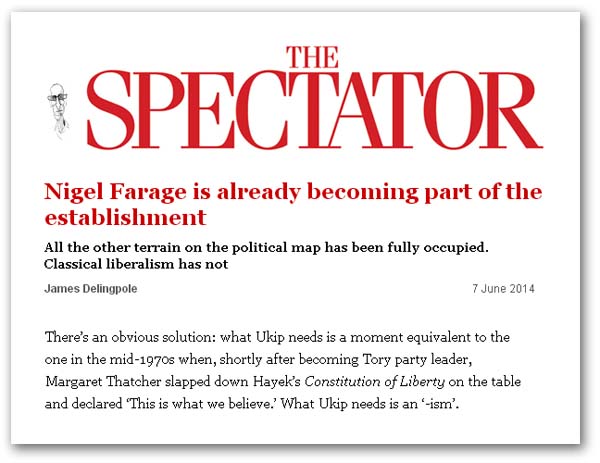 I really do appreciate the attempt by The Boiling Frog to take the heat off me by "outing" Dellers as an MI5 agent, after the former Telegraph blogger had complained that UKIP lacked an "ism".

In fact, Dellers thinks that, strategically, UKIP is "making a huge mistake" - they've allowed themselves to be defined by their negativity. Now, he says, "the time has come for them to have the courage of their convictions and tell us what they're actually for".

"What UKIP needs is a moment equivalent to the one in the mid-1970s when, shortly after becoming Tory party leader, Margaret Thatcher slapped down Hayek's Constitution of Liberty on the table and declared 'This is what we believe'", Dellers says: "What UKIP needs is an '-ism'".

And it is here that I have to make a confession. Dellers is not the MI5 agent ñ that, as everybody knows, is my role. Quite obviously, like Booker, he is a "sleeper". As to his "handler", well Ö a couple of days ago, I spoke with Dellers, when we actually discussed the Farage party.

What I had in mind was this piece which I wrote in May 2011. Then, I was commenting on observations from Raedwald, who felt the party was not "intellectual enough" and, in particular, was too "against" stuff and did not communicate or project a set of positive values.

This hooked straight into my own views, as I had been arguing then for a new "ism" and for a long time railed against UKIP's lack of vision.

My complaint, I wrote, goes way back, at least ten years. I felt that the single most important blockage, preventing the party developing its intellectual base, its vision and its move towards a new "ism" was the current party leader, Mr Nigel Farage. Over the last decade, I said, "he has turned the party into his own personal plaything, dispensing patronage as mood takes him and holding back the party development".

Then, on the eve of the Newark by-election ñ which is, for UKIP a make-or-break contest - we learned from the Daily Mirror that Farage had been playing his usual trick of boozing the night away, this time in a luxury hotel in Valetta. He used to do this in Strasbourg and Brussels, even missing appointments the next day because he was still drunk. 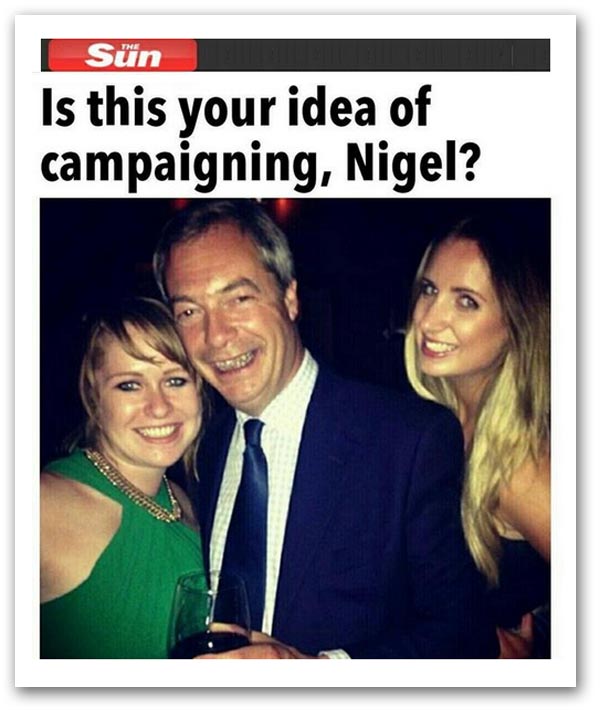 It is not so much that Farage was seen with a girl. In this particular case, she was not the issue.  More importantly, we see UKIP party workers committed to the campaign in Newark while their leader was actually giving a paid lecture at a tourism conference, and then, as the Guardian notes, he partied the night away. The Sun's picture caption says it all.

Having decided not to stand for Newark, in order to focus on the euro-elections but, with the elections over, he was not even engaged in political duties when he headed for Malta, leaving rainy Newark behind.

Said Roger Helmer, the candidate: "He already has four jobs and frankly one more may be too much for his plate". But a fee-paying jolly in Malta clearly was not too much for a party leader who could not find the time to be a candidate.

Thus, fulfilling my duties as an MI5 agent, aiming to keep the UK firmly attached to the EU, I decided that I must intervene, as I always do. Hence, Dellers ñ as with Booker before him ñ has been given his orders. And, if you believe that, you must be a very particular kind of UKIP supporter.

Dellers and Booker both, are well capable of forming their own opinions ñ and do. Dellers says he's worried about UKIP, and he's not wrong to say so. But three years ago, I was writing that our liberties and our [EU] exit plan, were far more important than Mr Farage.

It was not only our mainstream politicians who had abdicated our powers to unelected politicians in Brussels, I observed.. It looked very much as if Farage had abdicated his responsibility to create a viable Eurosceptic party. "And if he cannot do the job", I wrote, "he needs to stand aside and make room for someone who can".

While Helmer was making apologies for his leader, rather looked as if Mr Farage had already stood aside. With a 53 percent turnout reported, the UKIP leader - finally back from Malta - had sobered up enough to concede defeat, before even the votes had been counted. Dellers is right to be worried.