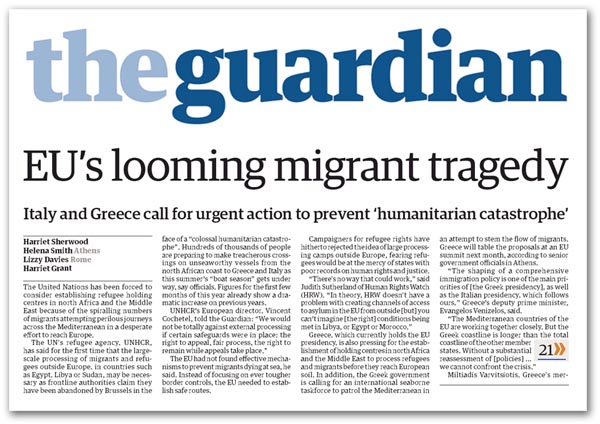 I was already planning another piece on migration, based on this, when I saw the loss-making Guardian had beaten me to it (illustrated above).

The earlier piece retails the belief of the United Nations' Refugee Agency (UNHCR) that 2,600 people have lost their lives in the Mediterranean since 2011, trying to make the crossing to a new life in Europe. And, following on from my earlier piece, if so many have died in the Mediterranean, even more have died traversing the Sahara, making this a tragedy of terrifying proportions.

Giving this a domestic political edge, though – which is where I intended to go with this article – we see the UN's refugee agency, UNHCR, saying that is now needs to involve itself in the large-scale processing of migrants and refugees outside Europe, in countries such as Egypt, Libya or Sudan, "as frontline authorities claim they have been abandoned by Brussels in the face of a 'colossal humanitarian catastrophe'".

That is the political point, the point I have been making for some time. As hundreds of thousands of people are preparing to make treacherous crossings on unseaworthy vessels from the north African coast to Greece and Italy, marking the beginning of this summer's "boat season", we see a crisis building that represents an almost total failure of EU policy, where institutions and member states between them have singularly lacked the will and the ability to get to grips with this issue.

Details of this crisis, past, present and to come, are recorded in the Guardian and elsewhere, and it is worth reading around the subject just to appreciate the scale of the problems that are building up on the perimeters of Europe.

What we need to address is the idea that Britain can stand apart from this crisis, as if Europe under assault was nothing to do with us. While countries in mainland Europe, individually and collective, seek to stave off the gathering hordes, we need not bother until we see them, with newly acquired EU citizenship, enter our country or when, as "illegals", they attempt the crossing at Calais.

We are, of course, all in this together, as part of the geographical entity called Europe, as a (relatively) rich developed nation and target for economic migrants, and as human beings who would not wish their fellow humans to suffer an ugly, terrifying death in the seas dividing us, or on the fringes of a hostile desert.

We can readily concede that Greece has a serious problem. Its merchant marine ministry reports that 15,000 undocumented migrants attempted to enter Europe via sea route to Greece last year, requiring a third of the 7,000-strong Greek coastguard to be redeployed to the eastern Aegean.

The numbers have been swelled by large numbers of Syrian refugees seeking to escape the civil war, which has displaced millions of people in the past three years, the Guardian tells us.. Some 7,000 refugees from Syria arrived on the Italian coast in the first nine months of 2013, compared with 350 in the whole of 2012. They are the second largest group to arrive by sea in Italy this year, after Eritreans. Most making boat journeys to Greece are Syrian refugees, including women and children. 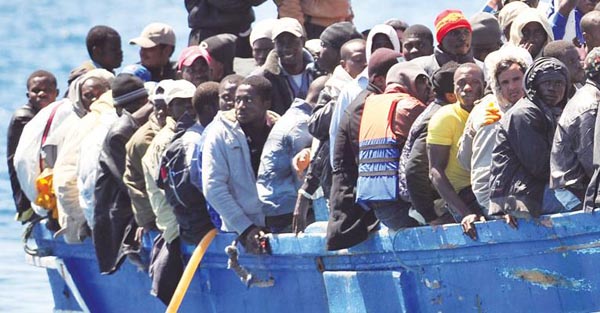 At least a third of those heading for Greece end up having to be rescued. Many boats are in poor condition and are overcrowded. In addition, "migrants travelling in small inflatables have explicit instructions from traffickers to sink boats once they see the Hellenic coastguard so they can be picked up in EU waters", says Miltiadis Varvitsiotis, Greece's merchant marine minister. "We can't deal with this problem forever alone. Europe needs to have an equal burden policy".

Further west, it is Sicily that has borne the brunt of illegal migrants, ever since the temporary closure of a reception centre on the smaller island of Lampedusa. Local authorities feel abandoned by Brussels and Rome. They predict a continuing rise in arrivals over the summer.

"If strong action isn't taken, it will be a disaster", says Enzo Bianco, the centre-left mayor of Catania and former Italian interior minister. "Either there is a strong initiative by the Italian government and by the EU, or we will be facing a real disaster of colossal proportions. If we're in a crisis with 50,000 arrivals, imagine what will happen if there are 500,000-600,000".

Standing back from this and looking at the problem from the Italian point of view, this country (and its Navy) has been accused of turning a blind eye to the flotilla of unseaworthy boats that have been struggling to reach its territory, deliberately allowing illegal migrants to drown, to discourage others from embarking on the same hazardous journey.

Apart from the inhumanity of such a stance, this is in clear breach of international law. But the Italians have a point. If they go out of their way to save these people, and land them on their territory (because no one else wants them), they end up taking responsibility for them, at some considerable cost. Furthermore, the disruption cause by so many migrants is having a destabilising effect on the entire political system and country.

Instability – even more than at present – is certainly not in the British national interest – and nor can we as members of the international community stand by and allow people in their thousands needlessly to drown. To that extent, this is Britain's problem as much as it is an Italian one. The Greek problems, equally, are of our concern, as indeed are the problems of Spain and elsewhere. In or out of the EU, they would still be of concern to us.

Outside the EU, of course, we could point to the failure of the EU to deal with the problem, and even support Greece in its arguments for a "comprehensive", EU-wide immigration policy, without being compromised by domestic concerns.

From the point of view of Britain at the moment, an "equal burden policy" is essentially what we have, but with no real say in policy development. Instead of stopping at Brussels, therefore - which is as far as we are currently allowed to express our concerns - we need to be taking an active part on the global stage. It is not enough to be a passive "receiver" of other people's problems.

Freed of the constraints of EU membership, we could bring pressure to bear through international institutions, in an attempt to deal with a problem that seems to be spiralling out of control, and to which "Europe" seems unable to frame an adequate policy response.

And it is here that we are seeing not only a failure of EU policy, but the most abject failure of UKIP as a political party. Here was an opportunity to look at the big picture and look for a Global Britain solution, as part of the larger international community. Instead, and with increasing emphasis over the recent election period, we have seen it pull up the drawbridge and adopt the timorous "little Englander" position, hiding behind the barricades in the hope that the problem will go away.

Crucially, to deal effectively with migration requires the integration of a range of policies and departments, not least defence, foreign affairs, overseas aid, and – of course – home security. And in all these respects, successive British governments have been no better than their European counterparts.

Given the opportunity to shine, however – and thereby show up government inadequacies for what they are – Farage has chosen the policy-lite route, which offers no practical solutions and which has exposed the anti-EU movement to accusations of racism.

How different it could have been if the party had made the case for reaching out and helping our neighbours and the global community tackle this problem at source, demonstrating that a global problem needed global solutions, for which purpose the UK needed to work outside the constraints of "little Europe" in order to maximise its impact.

Now, the initiative has been lost, and it is Italy which is making the running. It has pledged to force the migrant issue to the top of the EU agenda when it takes over the presidency in July, interior minister Angelino Alfano adopting increasingly provocative rhetoric with Brussels.

Last week, he warned Brussels to shoulder the €300,000-a-day cost of migrant control operations, or the Italian government would deduct it from its EU contributions. Italy, he said, could not "become the prison of refugees who want to go to northern Europe".

No more does he want to be the reluctant jailor than we want to be the besieged defenders. There is a problem begging for a solution here, and we are not rising to the challenge.