Brexit: boring the voters into exhaustion 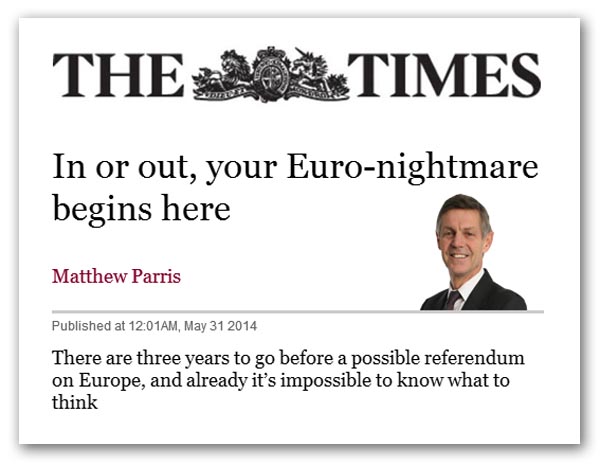 As advertised, the ludicrously expensive Continental Drift "In or out?" conference on the EU took place last Thursday, graced by the presence of Matthew Parris who tells us that there are three years to go before a possible referendum on Europe, and "already it's impossible to know what to think".

That is a very predictable outcome of a conference stuffed with an "authoritative line-up of experience and expertise", defined not by depth of knowledge and the breadth of their research, but by their "prestige". There was "hardly anyone on the podium who wasn't a tycoon, a knight, a lord, a professor or an über-boffin".

This, compared with our modest little workshop on Wednesday, when the fruits of some serious work will be discussed, this ensured that paying delegates were left confused and uninformed – precisely as Parris reports.

Parris, armed with the degree of profound ignorance that has become the speciality of the chatterati - believes he was "offered a glimpse of the future" at this conference when, in fact, all he got was the turgid droppings from closed minds, tired intellects and over-inflated egos.

Like some Dickensian ghost of times yet to come, the Times correspondent tells us, "Fate took me by the hand and tiptoed with me through 2015. Then 2016. Then 2017. Three long years we surveyed, Fate and I. Gloomy and appalled we watched what may lie in store for Times readers, for me, and for those millions more of our fellow citizens who will be taking an (sic) thoughtful interest in our country's direction".

The man does, of course, presume too much. On those constrained by the foetid limits determined by the pursuit of prestige above all else could believe that the experience in any way represents the future. For, what Parris saw was not an exposition but a shut down, an attempot to close down the debate.

And what he saw was it was "awful". Says Parris: "Reason fled; meaning turned to mirage; truth itself shimmered, shook and dissolved". The "impressive" day-long symposium was never boring. "Attention was held as the horror grew. We were being treated to a living demonstration of the death of objectivity: a dry run of the insanity that (assuming a 2017 referendum does take place) this three-year debate promises to become".

Then, tucked in was the ultimate objective (and successful execution) of the symposium: "Taking shape before a dismayed audience was the complete impossibility of ever reaching any conclusion", writes Parris. "Crushed beneath a tottering heap of speculative claim and counter-claim, reason, even among the reasonable, began to die".

Cutting to the chase, Parris asks what we learned that was new. "This", he says, "is, after all, only the start of three long years of argument: the debate is surely not yet exhausted?" He writes:

And what did we learn that looked capable of clinching an argument? What anchors in reality, what figures, what numbers could anyone supply? Both within and outside the hall I sensed the silent presence of an audience already weary of propaganda and hype, and hungry for hard facts. But as the day drew on, the facts melted before our eyes.

Three impressions, he adds, "had a certain freshness", for him, at least. The first was quite revealing:

Few, even among the Eurosceptics, are now trying with much conviction to sell the attractions of a Norwegian-style "trade-only" deal for a Britain outside the EU. What Vernon Bogdanor called Norway's "fax democracy" (in which a country has no place at the EU table yet still faces EU costs and regulations) sounded unsatisfactory for the UK.

There we can see where the land lies. The only option with a chance of working – albeit as an interim solution – is the one they all have to reach out and destroy.  This is why the IEA "Brexit prize" had so ruthlessly to exclude any reference to the option. This time, the coup de grace was delivered by the pompous Europhile Bognador, with the gullible Parris only too willing to soak up the propaganda, revealing nothing more than his own ignorance.

The second issue Parris identifies is the financial services industry (as represented on Thursday). It is not mightily fussed about the in-out question. Most of these voices sounded quietly hopeful that their sector could live with or without a British exit. But that is hardly surprising since most financial services legislation is coming from global bodies – not that Parris would know anything about this.

Third, this silly man was "mildly surprised" at the level of confidence that a British prime minister might bring some seriously useful gains home from the EU. Charles Grant from the Centre for European Reform suggested these:

This sort of BS might satisfy Parris, but he then asks where the "argument-clinchers" were. "As facts and statistics were tossed on to power-point presentations", he tells us, "a sense of the incurable subjectivity of this debate settled on us. Civitas found a three percent net loss in GDP as a result of EU membership, while the CBI found a four percent GDP net benefit".

Indicative of precisely why we should not get bogged down in micro-economic detail, or even allow the argument to be dominated by economic issues, we then have Parris tell us that, "these figures themselves dissolve into mere assertions when, digging deeper, you examine the assumptions that have to be made before a number can be posited".

Let me illustrate, says Parris: UKIP's Tim Congdon handed out his booklet showing, he told us, that the EU costs Britain "roughly 11 percent" of our GDP. Half of this, he said, comes from the cost of EU regulation. But …

… what he cannot do, because nobody can, is give a figure for the cost of the British-made regulation that might (or might not) replace the Brussels-made regulation. Would parliament want rights of parental leave? Control of chemical food additives? Health and safety legislation? Product specification? Nobody can even guess how much EU-sourced regulation a future "unshackled" UK parliament would vote to replicate. The "cost" of EU regulation is anybody's guess.

We've tackled Congdon before, and his figures have never stacked up - even the facile Parris can see this. But our arguments do stand up, although they were never going to be heard in this venue. That is how they rig the debate – defining who speaks. Their aim is to control the debate and ensure that no workable solutions ever see the light of day.

The success of this strategy on the day was plain for all to see. Parris left the conference, as (he thinks) did most of the audience, "with the settled and dispiriting conviction that the economic argument for or against Britain's EU membership will be impossible to frame convincingly".

It is, he says, "unlikely to gain traction one way or the other, and in the years leading up to a possible referendum would confuse, exhaust and, finally, numb the voters". "He's numbed already, and there's three more years of this to go".

It is there, though, that Parris does as a service. We see the tactics of the Europhiles, and the europlastics. But we also know that they lack imagination, perception and the understanding of the issues. We're well ahead of the game and we know how to energise the debate – which is what we are doing on Wednesday.

The Parris experience is, in fact, encouraging. For Ł1,800 a piece, the Continental Drift marks have been fleeced. We can deliver the answers and our case gets stronger by the day. And we have no need to take people to the cleaners. The trick is to go for an economically neutral interim solution, by-pass the narrow economic debate and look at the big picture.
The "little Englanders" and the "little Europeans" have one thing in common - neither can break out of the intellectual boundaries they have set themselves. We're going to do the job for them.