UK politics: what to do about UKIP? 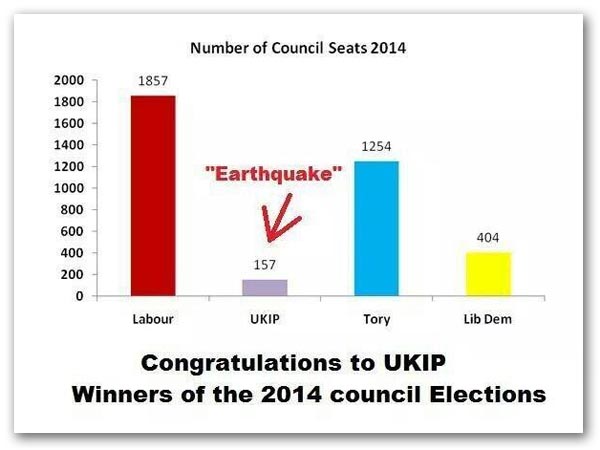 There is no easy way of working what precisely is happening. But there is no gainsaying the facts. Last year, UKIP took 6.1 percent of the contested seats. This year, it took four percent. Last year, UKIP took 20 percent of the total vote (according to the Electoral Commission). The BBC put the figure at 23 percent. But the BBC now puts UKIP's share of the vote at 17 percent.

On the face of it, that represents a decline in support for UKIP. We are also told that UKIP fielded twice as many candidates, although I have no independent verification of that and, in any event, there were candidates for only a quarter of the London seats.

All things being equal, the increase in seats should have increased the share of the vote, as the number of seats being contested had not doubled. However, things were not equal. Unlike last time, London seats were being contested, an area in which UKIP traditionally does not do well.

Furthermore, it appears that, overall, turnout might have been slightly up, possibly working against UKIP. The lower the turnout, the better UKIP performs, as its supporters tend to be more committed than those of other parties. Yet, on the other hand, the local and euro-elections coincided. That should have increased the UKIP performance.

With all those complications, it is not safe to assert categorically, that UKIP performed less well than last year. But, on the other hand, with the information readily available in the public domain, it cannot be claimed that there has been a UKIP "surge", or that Mr Farage has achieved his political "earthquake". Despite what the media says, there is simply no evidence to support the claims.

Therefore, when you take a cold, hard look at what is going on, the only real impact that Mr Farage has really had is on the hearts and minds of the legacy media and the political classes. UKIP has become important because they have made it so.

Ed Miliband, for instance, says results in so far showed a "deep sense of discontent" and a "desire for change". But, in fact, what we have could be considered compatible with a declining protest vote and a reversion to more normal politics.

Certainly, as it stands, with no coherent policies and an obvious inability to manage expectations in these elections, there is actually no great reason why the established political parties should take UKIP seriously or treat it as a threat. The party will eventually self-destruct of its own accord. It will do so because these sort of incoherent one-man-bands always do. Mr Mosley's experience is an indicator of that.

But where UKIP scores and will continue to score is providing a contrast to the hubris of the political classes. That, for me, makes the most memorable quote of the election, this from Runnymede Borough Council (RBC) Conservative leader, Pat Roberts.

Noting that the highest voting turnout of the evening for his Council was the Foxhills ward with 37.7 percent, and the lowest was in Englefield Green East, with 26.4 percent, Roberts said, "I'm delighted with the outcome". Mr Roberts, it should be noted, had just retained his seat for Englefield Green East.

As long as the winning is all that counts, then UKIP will have the potential to destabilise the system.  But, in that context, I am beginning to see UKIP's function as holding up a mirror to the stupidity and inadequacies of the system as a whole.  It is not a replacement or an alternative, as such - rather, it is a mirror-holder.
Thus, to deal with UKIP, the system must deal with itself. It must change itself, whence the mirror-holder will cease to have the same relevance. But since it seems incapable of dealing with its own inadequacies, or even diagnosing them properly (or at all), there will remain plenty of work for the mirror-holder to do.