Euro-elections: more of the same 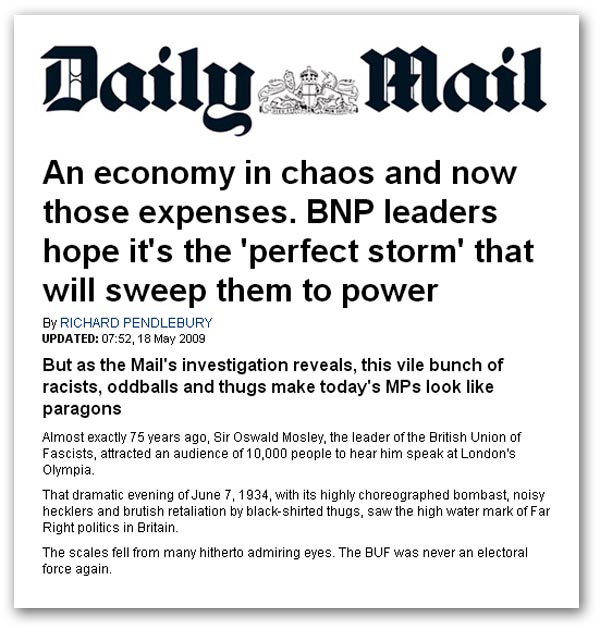 Almost exactly five years ago, we were reading this (above). All in the run-up to the 2009 euro-elections, we could see the BNP set to take the country by storm. And so there was the media reaction ...

3 April 2009: Make no bones about it. Despite the silence, the political claque is shit scared. They have all done their private polls and they know that the BNP is on a roll.

The 20 percent plus vote is firm, right across the country û with a few dead spots û and BNP are routinely thrashing UKIP, consigning it to the dustbin of history. Currently, the estimates are that the BNP will take between ten and twelve seats at the euro elections, and they will take votes from all three main parties û plus UKIP.

The politicos also know that this is not a vote for the BNP. It is an anti-politician vote, reflecting that the major Westminster parties û all of them û no longer offer any real choice, or any choice at all. And that is what scares them. The votes are coming not just from Labour but from across the board û the Tories and Lib-Dems are just as much threatened as Labour.

6 April 2009: As the feeding frenzy on MPs' expenses continues unabated, the increasingly hostile media coverage is unwittingly acting as a recruiting sergeant for the BNP. Private polling carried out by the parties is showing that this issue, above all else, is increasing the "anti-politician" vote and driving people into the arms of the BNP.

10 April 2009: A little while ago, I wrote about the electorate being in a "funny" mood à I countered with "festering resentment" as a better description of the public mood.

11 April 2009: Whatever it is, with a range of slogans and images, the BNP is capturing it. The political claque is going to have a very hard job countering its messages, and the more it remains in denial, the harder it is going to get for them à

Nearly two years ago, Tory MP Charles Walker wrote a monograph on dealing with the BNP. His advice included the injunction that, "We must rediscover our campaigning zeal and let it be known that we value our constituents and their vote."

25 April 2009: What is particularly remarkable à is the contrast between this and the faux outrage of BBC reporter Mukul Devichand on the rise and rise of the BNP, and its prospects for getting one or more MEPs at the euros this June.

What the BBC have not factored in, however, is that even if the BNP candidates were vermin of the most despicable kind, they would be hard put to it to compete with the present incumbents, or match the loathsome venality of the EU parliament itselfà

Certainly, since the common view of the BNP amongst the established political classes is one of contempt, there could be no better way of expressing contempt of the EU parliament û and those self-same political classes - than sending members of a "contemptible" party to fill the placesà After all, if you are selecting people to go to hell, you tick the box marked "sinners".

28 April 2009: For any established political party, the euro-elections are a nightmare. There is no point in producing a manifesto as there is no means by which it can be honoured. Nor can they address the hard questions û like what would you do about the CFP à or the CAP à or à

Looking at it dispassionately (if one can actually do that), what we have is the main opposition party asking the electorate to vote for it solely in order to send a message to the government. That, in itself has to be an innovation. We are not getting, "vote for us because à". The ballot box has been turned into a megaphone.

30 April 2009: The story of this year's euro-elections could very well be the rise and rise of the BNP. But what also makes the elections fascinating is the behaviour of the media.

On the one hand, we see the "right wing" press, with the possible exception of the Mail on Sunday largely ignoring the BNP issue. Most recent to do so was The Times, which managed to discuss the elections without making any reference whatsoever to the BNP. On the other, we see the left wingers making a meal of the "threat", with even Al Jazeera pitching in. Latest into the fray is Peter Hain in The Guardian with an impassioned piece headed "We need to wake up and tackle BNP poison head on".

This racist party, he writes, stands on the brink of electoral breakthrough, then demanding that, "We must fight them as we did the National Front in the 70s". His concern is that, should the BNP win MEP seats, it would secure an unprecedented platform and entitle the BNP to draw hundreds of thousands of euros from Brussels indirectly to buttress its full-time personnel and organisation.

16 May 2009: One cannot, incidentally, avoid noticing how these "hot shot" commentators suddenly wake up to something and present is as if it was somehow their own discovery, when we have been reporting this for many months, and especially last month when we drew attention to the BNP internet traffic ranking.

Anyhow, while the "right wing" seems to be waking up, The Guardian, it seems, is less worried now. Citing a recent YouGov poll, it is telling us that UKIP, not the BNP, is set to benefit from anti-politics mood at the euros, with the poll putting UKIP on 15 percent, compared with 3 percent for the British National Party. However, it does concede that the BNP polling figures may be an underestimate, since voters can be reluctant to declare their support for that party.

It would be hugely ironic if UKIP did benefit from the expenses scandal, having been somewhat cavalier with its own accounting, but since the party is assuming the mantle of the tame "establishment-approved" protest party, even the BBC seems to be giving it the occasional plug, all in the hope that votes will be diverted from the BNP.

It is joined by The Daily Mail today, with a long article on the BNP, reporting, "this vile bunch of racists, oddballs and thugs make today's MPs look like paragons". That is almost certainly true but the way the anti-BNP campaign is being played, it looks more like the establishment closing ranks.

25 May 2009: Despite the strenuous cross-party campaign against it, and the attempts to "puff" UKIP in the hope that it will Hoover up the protest vote, the BNP continues to make steady progress in local authority by-elections. It has also produced a "shock" poll result which worries The Sunday Express, pulling 38.4 percent of voters' support compared with 19.2 percent for Labour.

28 May 2009: Cameron, for his part, is accusing the BNP of being "fascist" û which is rather like accusing a dog of having four legs.

Being confronted at an agricultural show in Somerset by a voter who told him that the BNP "have a point when it comes to immigration", Cameron came up with the most extraordinary statements. "There is a proper national debate that we should have about immigration à I want us to limit the number of people coming to Britain, but do not believe that the way to beat the BNP is to half agree with them. These people are not pleasant people".

The extraordinary thing is that, having studiously ignored û and even suppressed û any debate on immigration, thereby giving the BNP its opportunity, Cameron tells us that there is "a proper national debate that we should have à". The term "should have had," might have been more appropriate. In the last week of the campaign, it is now too late. The moment has passed and the "not pleasant" BNP is going to reap its harvest of neglect.

30 May 2009: "A vote for the Conservatives is also a vote for a referendum on the EU constitution. We're the only party that has stuck by the promise to give people their say".

That is in a letter signed personally by William Hague, dated 26 May - as unequivocal as you can get. There are no caveats whatsoever. The message is clear, simple and direct: vote Conservative and you will get a referendum.

30 May 2009: A Populus poll for The Times has the Tories on 30 percent for the euros with UKIP in second place on 19, relegating Labour to third place on 16. The Lib-Dems get 12 percent, the Greens poll 10 and the BNP are on 5 percent (eight percent in the North).

What is interesting about this is that Cameron's speech about needing a "massive, sweeping, radical redistribution of power ... from the EU to Britain ..." seems to have made no difference to UKIP's fortunes. Nor indeed has his apparently unequivocal pledge to give us a referendum on the constitutional Lisbon treaty. No doubt this is because the majority of people did not believe that Cameron meant what he said.

7 June 2009: The experience of a Labour activist is recorded in The Observer, one which he would rather forget. On doorsteps he had found the mood among voters shifting over the last fortnight from "unbridled anger" to disdain: "The public now just view us with complete contempt," he says.

The Sunday Times, therefore, is not taking any great gamble when it suggests that today will be the day of the "others". In the local elections, they polled heavily even if they rarely won seats. But their presence was felt in one in six wards, triggering a fall in the share of the vote for all three major parties.

As it was, the BNP didn't do that well, and UKIP took the crown. But they're back again this year, and the media is out for fresh game. The names change but the same old paranoia survives. In short, nothing changes, as Complete Bastard observes.

On the face of it, none of the mainstream parties should have any problems. An overview of BNP's policies suggests a degree of political na´vity which borders on the absurd. Without addressing the party's core issues, even its defence policy (illustrated by a Spitfire) tells you the direction of travel...

If halfway mature politicians cannot shred that policy, and the many others, they should not be in business. There is no need to play the "fascist" bogyman card. This is a party which is a political lightweight, with policies which do not even begin to address modern realities. It should be easy to dismiss as a joke.

Unless they deal with the BNP before the euro-elections, though, they are going to have to deal with them afterwards, when they will be an altogether tougher nut to crack. Ganging up and sending a message of "anyone but BNP", therefore, is the wrong tactic.

On the other hand, the reluctance of the mainstream political parties to take on the BNP possibly says more about them than their rival. If they lack either the confidence or the ability to deal with such a lightweight opponent, then the success of the BNP will be of their own making.

And so it is, all the media and the politicians have to do is swap the names. Heir of BNP is BNP-lite, aka UKIP. Three letters has become four. Where they once sprayed "fascist", they now trot out "racist". The establishment hasn't learnt a thing. It is no better at dealing with UKIP than it was its predecessor.