That debate: a victory against a weak opponent 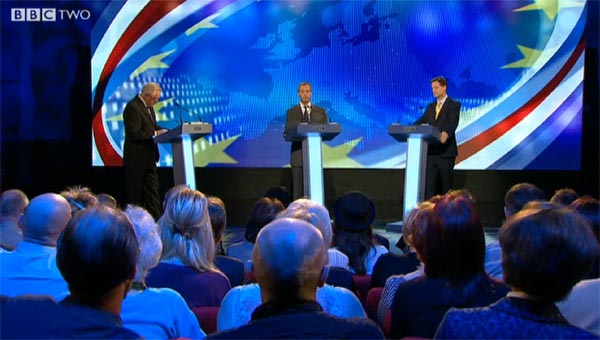 So the second debate came to pass. And I wrote this post while watching the show, so we'll have to come back to it in more detail when we've chewed over the videos and commentary, to give it a more balanced appraisal.
Overall, I thought it a poor debate. But my immediate response is to home in on Nick Clegg answering a question about the power of the UK outside the EU. There, he was quick to invoke the "fax democracy" meme.  For a fleeting moment, I was really pleased. Clegg had created the perfect opportunity for a well-crafted comeback - a killer put-down - making it potentially the pivotal point in the debate.

My abiding memory was that David Dimbleby was scrupulously fair in giving Farage every opportunity to deal with the issue. In fact, he handed him the opportunity on a plate. And, however well Farage might have handled the rest of the debate, this he completely fluffed.

Probably, unless you are a nerd, you would not have noticed it.  But Clegg, in a generally poor performance - where he missed a number of open goals - had made a major tactical error, opening up a point on which he could have been slaughtered. He really did give Farage a gift, but he was also raising an issue on which we really need to score.
And it is not as if this is an arcane corner of the debate.  The opposition is constantly bringing up the "fax democracy" and "no influence" memes, as did Open Europe yesterday.  All Farage had to do was explain that Norway and Iceland had consultative arrangements in place and that they had vetoes. He could also have said, with globalisation, an increasing number of laws were made on the global stage, where the EFTA countries were fully represented, while the UK was excluded.

Farage could have then said that in areas where they had major economic interests, Norway and Iceland had more influence than the UK – which had only eight percent of the vote in the Council of Ministers. And, out of the EU, we too could increase our power at the "top tables" of the global trading bodies where it really matters.

Farage could and should have anticipated the question. There was a very good chance that it might come up. He and his team should have worked out a response, and rehearsed it. Here is one I've just knocked up, in a matter of minutes, the sort of thing I could do in my sleep, without rehearsal:

Norway and Iceland have consultative arrangements and vetoes. That is more than our measly eight percent of the vote in the Council of Ministers. And with globalisation, most trading laws affecting the EU are made globally. At that level, the UK is excluded while Norway and Iceland are fully represented - they have more influence than the UK. Out of the EU, we would return to the global "top tables". We would then have more power not less.

Timing that, it comes out at 30 seconds, allowing for emphasis. That is well within the allowance, and easily deliverable. But Farage showed no familiarity with the Norway Option. It was really obvious to me that he was not at ease with the arguments. In my view, he delivered a pathetically weak response. I'll explore that further when I see the recorded video.

As I said earlier, therefore, even when you give these people stuff gratis, they don't use it. Whatever the ill-informed rumours might be, that's why I fell out with Farage in the first place. He prefers to wing it, instead of doing the work. He might get away with it most times, and he obviously did in this debate overall. But there are times when being on top of your brief really matters. This was one of them.

That now brings us to Clegg's "seven percent lie". That came up several times in the debate, opening up another potential "killer point". Farage is, of course, compromised by his 75 percent claim, but I gave him the perfect out. All he needed to do when Clegg trotted out his line was, with lofty disdain, dismiss his argument, saying the House of Commons figures were based on a limited sample. He should have then said:

We can argue about percentages all day, but the facts are – and you do like facts, Mr Clegg – that on the UK government database there are registered roughly 3,969 General Acts and 71,851 UK Statutory Instruments. That makes 75,820 in all. On the EU database, there are 20,868 EU acts - directives, regulations and decisions - currently in force. Whichever way you look at it, that is a lot of law we have to obey.

The only mitigating fact is that, however bad Farage was on some issues, he handled others competently. And he did score some good hits: his Iceland and Switzerland argument was messy but almost up to par. Clegg, on the other hand, was much worse and consistently so. I think he misjudged his entire approach. He never really laid a glove on Farage and ending up being patronising and unconvincing, with a distinctly unimaginative closing speech.
YouGov gives Farage the victory with 67-27 percent and ICM awards 69-31 percent. The limitations of these snap polls are well known, and there is probably an in-built-bias against Clegg. Nevertheless, Farage gets the victory. But I thought it a weak performance, Farage winning by such a margin partly because he was against an even weaker opponent.

Thus, it was, in my view, a victory by default, Auchinleck versus Marshal Graziani. God help Farage if the europhiles ever field a Rommel.

And, while some might think I'm being less than fair to Farage (perhaps returning the compliment) we should recall that, in the larger battle, we are losing: 42 percent wanting to stay in the EU and only 36 percent wanting to leave. And while it is easy to rubbish the BBC, I thought Dimbleby in his handling of the debate was fair - much fairer than I had expected.

The trouble is that, out in the real world, the debate isn't fair. We see the way, for instance, Open Europe quite cynically rig the debate. To compensate for this, we really do have to be on top of our game, exploiting every possible opportunity we are given. The Farage-Clegg debate, therefore, was one of missed opportunities.