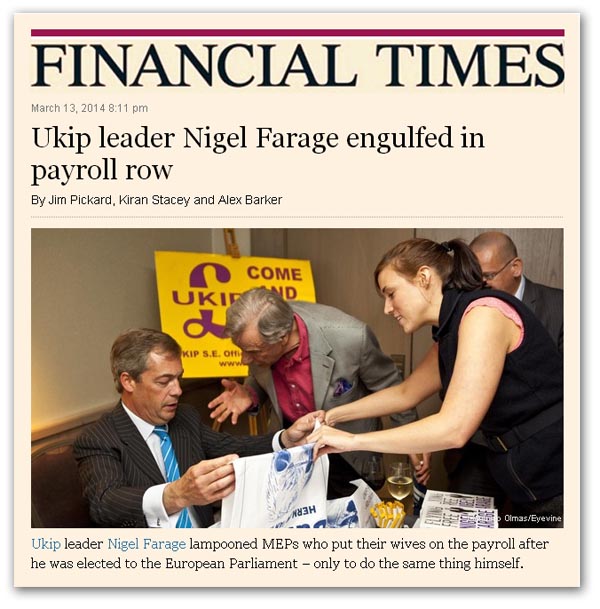 The Nigel Farage story has moved on today, but is by no means abating. The media, however are moving away from the slightly risky territory of the UKIP leader paying a former mistress and onto the very much safer ground of him paying his wife, Kirsten, out of his secretarial allowance.

This is where the Financial Times stands, while the loss-making Guardian has resuscitated a video clip, with Farage stating that an MEP could earn as much as a Goldman Sachs banker through claiming expenses and employing his wife.

That was part of a longer documentary, Enemy Within, screened on BBC2 in 2000, at a time when there were only Michael Holmes, Jeffrey Titford and Nigel as MEPs. That was the time when the MEPs were pledging to put their surplus expenses into a fund to help people stricken by EU red tape, with a promise that wives and other relatives would not be taken on the payroll.

After yesterday's epic front page headline from The Sun, demanding, "Did UKIP with your aide Nige?", on the back of a page 5 story, the Daily Mail repeats the allegation today that Farage had an affair with Anabelle Fuller, who returned to Farage's personal payroll last year.

The paper thus asks, "Could Nigel Farage's 'weakness for women' be his Achilles' heel?", declaring that: "Ukip leader's love life may be his undoing at May's Euro elections".

However, a piece on Huffington Post rehearses yesterday's story, but is notable for some of the comments which suggest that Farage's private life is his own affair, and nobody else's business. That is fair enough comment, or would have been until Farage decided to mix business with pleasure. Then it became a legitimate public issue.

And Farage has most certainly been mixing business with pleasure. I recall once walking into his office in Strasbourg, only to find him in a passionate embrace with the latest intern, while Kirsten was actually in town with his newly-born child.

Later, we - the staff - had the embarrassing experience of having a fiery Kirsten storming into the office to demand from us information on what was going on. But far from being repentant, Farage gave the intern a full-time post. It thus became evident that the way to success for an attractive female was via Farage's bed.

Very much later, the Daily Mail tracked down this former employee, but she refused to spill the beans, then having her own career to think of as a full-time Brussels functionnaire. That left the paper without a libel-proof story, so the details were never published.

As for Annabelle Fuller, her relationship with Farage was an open secret. Such was their lack of caution that Farage had to be warned several times about making it too overt. He was, for instance, cautioned against taking her to Washington for a long weekend at the taxpayer's expense. But he never denied to friends and colleagues the nature of the relationship.

Once the newspapers started to pick it up, though, both emphatically denied their tryst, making ample use of no-win, no-fee legal services. More that a few journalists fell foul of the Farage sting, leaving a legacy of ill-will that could only bode ill.

The show-down with the long-suffering Kirsten, however, could not be put off forever. More than once, she had locked him out of the house when he had returned in the small hours from his drunken, womanising binges, and with one expensive divorce already costing him dear, he could not afford another.

The question thus remains as to whether Farage did a deal with public money. At the moment, no one is saying, but not a few in the party have been asking whether paying Kirsten her Ł30,000 salary was "hush money" for putting up with Annabelle. There had to be a reason for breaking all the promises ever made by UKIP about not hiring wives.

And now, with Mz Fuller back on the payroll, I think we are entitled to know if that is because she knows where the bodies are buried. For whatever reason, a woman with an erratic background and little to commend her is being paid a stellar Ł60,000 salary by Farage – plus additional fees to her PR business.
Thus, the UKIP leader is paying his women as good as Ł100,000 a year from taxpayers' funds. And it is that, not his sexual peccadilloes, which is rightly in the public interest. We, like The Sun, are entitled to ask questions about these payments, and why they are being made. 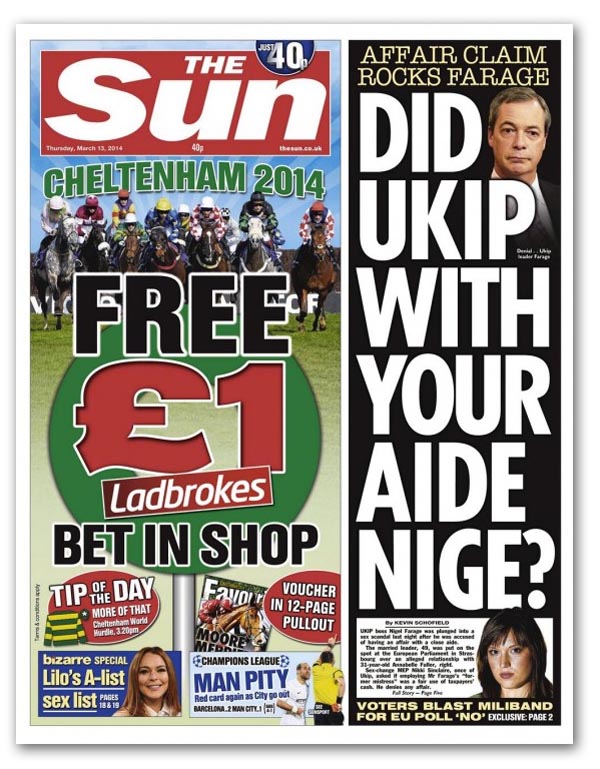 The point, of course, is that secretarial allowances are to enable MEPs to service their constituencies and perform effectively as elected representatives. For that, research is essential, an area in which UKIP generally - and Farage in particular - is dismally lacking.

As a former researcher for Farage's one-time group in Brussels, the EDD, I know only too well how vital the research role is. After I left, the role was never properly serviced. Bloom even sought my services again, but I recall my response being: "not even if hell freezes over". I now work as a researcher in a private capacity, for some decent men.

But I am very far from being the only competent researcher in the business. And for Ł100,000 a year, Farage could buy some serious capability. How much of the low-grade output coming out of UKIP is the result of his spending taxpayers' money on keeping his women quiet?

If he had done as I had suggested, and taken a like amount from the expenses of each of the UKIP MEPs, with additional group funds we could have set up a world-class research unit in Brussels, relying on the overhead being paid for by the European Parliament.  The aim was to rival the famous Conservative Research Department, the unit which kept Margaret Thatcher in power.
Despite all sorts of malicious rumours and ill-informed gossip, that was the real reason Farage and I fell out. I wanted the party to be research-led, pre-empting the FUD, keeping our MEPs and members properly informed and making a solid, unimpeachable case for leaving the EU. That's why, in the first instance, Booker and I wrote The Great Deception, a book Farage did his best to sabotage, seeking to prevent it being published.

On the other hand, he was already frittering away money on fruitless enterprises, on hiring his women and on topping up his already generous pension from his office expenses. The courageous Spiked online, meanwhile, deletes my comments on its own sycophantic piece, even as the sky darkens with pigeons coming home to roost.

With the likes of Spiked and others giving him an easy ride, Farage has got away with it for so long that he believes he can walk on water. But now, a number of journalists – who have also had to put up with a number of more sinister threats than just libel suits – have found ways of showing that he is just another opportunist politician on the gravy train.

That, of course, leaves UKIP members out on a limb. Yet Farage, in his own defence, asserts that his supporters "have had to develop thick skins and brave resilience when dealing with 'smears'". By this means, he dismisses the recent press as "part of a concerted campaign to undermine us which just makes us dig our heels in and wave off the Establishment". But it won't wash.

This is exactly what one might expect of Farage, but those who wish to dismiss current events as "smears" need to grow up.  It is a miracle that their leader has got away with it for so long. He has held hostages to fortune for so many years that it was only a matter of time before he got his comeuppance. If hadn't been this, it would have been something else.

Nor is this the end of it. There is much, much more in the pipeline. By the time the media has finished, the only thing left of Farage's reputation will be smoking wreckage - however long it takes. His supporters have been backing the wrong man. They need to be thinking about how to rescue the party before it too crashes and burns.