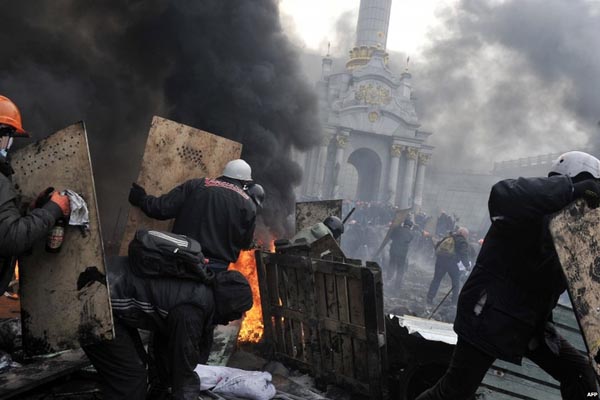 The Ukraine situation broke on 22 November last year, following the dramatic rejection by the Ukrainian government of an Association Agreement with the EU, a week before the ceremonial signing was due to take place in Vilnius, Lithuania.

So unexpected was this move that it took a few more days before the legacy media in the UK realised something important had happened. Only then did it start to report it, albeit getting it badly wrong, with the BBC four days later talking in terms of the failure of an EU-Ukraine "trade deal".

Even now, many commentators are still making the same mistake, believing that this was little more than a trade deal gone wrong. It is held by some that the event merely acted as a catalyst, bringing to the surface underlying tensions between east and west, thus triggering the extraordinary bout of violence and the toppling of President Yanukovych.

However, it is not at all irrelevant that, on the day Croatia became the European Union's 28th member state, a certain Mr Cameron made a hugely provocative speech in the former Soviet Republic of Kazakhstan, outlining his vision of an EU that stretched from the Atlantic to the Urals".
The Urals, of course, mark the unofficial border between Europe and Asia in Russia and Mr Cameron's remarks were taken to indicate that he believed that Ukraine, once known as the bread basket of the USSR, should be admitted to the EU.

As to being "provocative", the Russian sphere of influence extends to include the Ukraine, on its south-western border. There is no way, historically, socially or politically that the leader of the Russian Federation could allow the Ukraine to detach itself from its sphere of interest, and align itself to the western bloc.

Despite that, with total disdain for the finer feelings of the Russians, the EU has been nothing else but provocative. Its website, going back to 2007 (the earliest we can find), tells us that the EU is seeking an increasingly close relationship with Ukraine, "going beyond mere bilateral co-operation, to gradual economic integration and a deepening of political co-operation".

Ukraine, it goes on to say, is a priority partner country within the European Neighbourhood Policy (ENP). The Partnership and Co-operation Agreement (PCA) which entered into force in 1998 and provided a comprehensive and ambitious framework for cooperation between the EU and Ukraine, in all key areas of reform.

At the Paris Summit in September 2008 an agreement was reached to start negotiations on an EU-Ukraine Association Agreement, which was to be the successor agreement to the PCA.

In November 2009, the Cooperation Council adopted the EU-Ukraine Association Agenda. This replaced the former Action Plan, and was installed to prepare for and facilitate the entry into force of the new Agreement. For 2010, a list of priorities for action was jointly agreed by Ukraine and the EU.

Thus far, no country has ever gone a stage further than this without then becoming a candidate state, preparing to join the EU. This was the route taken by Bulgaria and Romania. The huge scope of the Association Agreement thus attests that it is far more than a simple trade agreement, the pursuit of which has been relentless since well before 2001, as this document illustrates.

In all and any respects, therefore, the EU's dogged persistence in pursuing this agreement with the Ukraine has been the equivalent on parking its tanks, if not on Moscow's front lawn, on the verge opposite. This was something no Russian government could possibly tolerate for very long.

The only surprise in the current situation, therefore, is that Moscow left it as long as a week to the signing of the deal, before vetoing it. Why it left it so long is anyone's guess, but perhaps Putin thought that Brussels would see sense and scale down its provocation before things got out of hand.

In the event, though, hubris prevailed, the outcome being as predictable as it was preventable. Buoyed up by promises the EU could not keep and would not, even if it could, the "pro-EU" demonstrators have been spurred on by Brussels, rather in the manner that the coalition forces in 1991 encouraged the Marsh Arabs to depose Saddam Hussein.

This time, a president has been removed, but all this has really been achieved is to create a huge area of instability. Already, Moscow is branding the action by the demonstrators as a "mutiny". The EU, and the United States, which is largely a spectator in this unfolding drama, will have to back off, as indeed they will, allowing Russia to restore its grip on the Ukraine.

This will mark a necessary but humiliating retreat by the EU, and a total failure of its "soft power". This is an unforced error, from which it will have difficulty recovering. Even the sycophants in the Norwegian government would now have difficulty with a nomination for a Nobel Peace Prize.