US politics: democracy in action 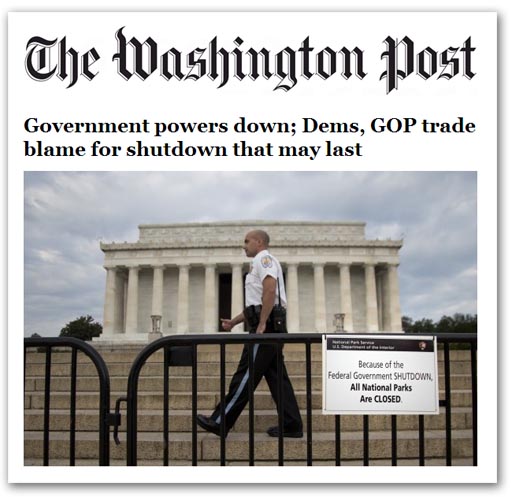 The barricade in picture seems largely for show. When elderly veterans piled off the chartered buses in front of the World War II Memorial, some in wheelchairs, metal barricades and signs announcing a closure due to the shutdown of the federal government awaited them.

But, said Republican Congressman Steven M. Palazzo, "the barricades just seemed to part. A US Park Police officer, who declined to give his name, observed: "I'm not going to enforce the 'no stopping or standing' sign for a group of 90 World War II veterans", adding, "I'm a veteran myself".

This, however, is just one small incident in an escalating drama in the United States, where 800,000 Federal employees have been sent on indefinite unpaid leave as the US government ran out of money, while essential workers such as air-traffic controllers, prison guards and Border Patrol agents, are being required to serve without pay.

Said the Washington Post, first slowed, then stalled by political gridlock, the vast machinery of government clanged into partial shutdown mode on Tuesday and President Barack Obama warned the longer it goes "the more families will be hurt". Republicans said it was his fault, not theirs.

"Ominously", the paper continues, "there were suggestions from leaders in both parties that the shutdown, heading for its second day, could last for weeks and grow to encompass a possible default by the Treasury if Congress fails to raise the nation's debt ceiling".

It is not for us, though, to add ill-informed comment. Rather, we note with approval from this side of the pond that, for good or bad, this is what democracy looks like. Where we have a docile House of Commons which has never in living memory deprived the government of money, despite public debt going through the roof, we can only watch with admiration and not a little jealousy.

Under our Harrogate Agenda, we would go further. Rather than leave such matters to our representatives, we would insist on an annual referendum to approve the government budgets (at national and local level), and likewise any extensions of debt.

But what is heartening about the US experience is that, despite the very obvious disruption, the country has not come to a grinding halt. State and district services, which have their own budgets, continue as before, even if the Statue of Liberty and Ellis Island are closed.

We could learn the lesson from this in that, if the Harrogate Agenda demands went ahead, a budget freeze would be survivable. The world would not come to a grinding halt.

The more important point is that whoever controls the money has the real power – and to have real power means controlling the money. And unless we the people have that control we can never call ourselves a functioning democracy. We must be able to shut down our government unless it does our bidding, and when we too start seeing closure notices (and start disobeying them), we will know that democracy has finally arrived.

And, when that day arrives, we will ensure that one failing in the US system is not repeated. Currently, despite the shutdown, Congress and the President are still getting paid - at a rate totaling more than $250,000 per day for all of them. In our system, the politicians' money is the first to be stopped.