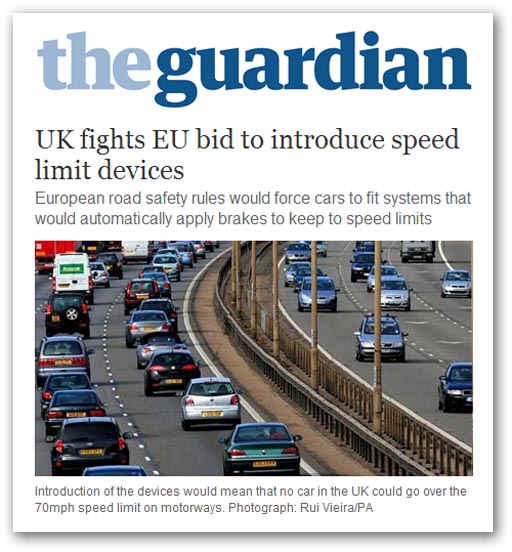 First the Mail ran a piece, which was then followed by the loss-making Guardian warning of impending EU rules which would require cars to be fitted with location-sensitive "intelligent" speed limiters. The story has also been picked up by Sky News.

Strangely, though, we've been warning of the Commission's intentions on this for nigh on eight years, bringing it up in April 2005, via Booker, in September 2005, April 2006 and May 2006. We also reminded people in December 2009 and then last June, of the Commission's broader intentions regarding speed controls on the road networks.
Universal speed control has always been an ambition of the road safety zealots and now they have the technology to do it. But they are also going for the Green vote, arguing that the emissions benefits from speed management are "impressive".

This particular idea, according to ROSPA, was identified by the European Commission as a key issue more than a decade ago. In a resolution in June 2000, it recommended "the use of advanced assisted driving technology which has considerable potential for improving road safety", calling for research in "technology relating to speed limitation devices and to identify any technical, organisational, administrative and legal difficulties in introducing them".

This led in 2002 to the PROSPER project. Six national partners were involved, including the UK, which gave active support through the then DETR, with Leeds University Institute of Transport Studies fronting the research. Transport for London (TfL), now under the political control of Boris Johnson, has been an enthusiastic advocate, having already made technical preparations.

From all this, the current proposals have emerged. And the system has acquired a name: "Intelligent Speed Adaptation" (ISA). It is also referred to as "Intelligent Speed Assistance", with an Orwellian description to boot.
We are told that it will either warn drivers when they exceed the local limit (supportive ISA), or it will be used for "actively aiding the driver to abide by the limit" (known as "intervening ISA") – preventing the driver going faster than the posted limit.  Thus, drivers are not prevented from speeding. The system merely "assists" them to stay within the posted speed limits.
Contrary to multiple media reports, though, there is no question of the system applying the brakes when posted speeds are exceeded.  Limiters will be wired into engine management systems (EMS) and reduce fuel flow once the posted speed is reached, effectively becoming externally moderated cruise control systems.

Prize for technical illiteracy, however, goes to girlie Clare Carter in the Telegraph. She has it that new cars would be fitted with cameras that could read road speed limit signs and automatically apply the brakes when this is exceeded.

The system will, of course, rely on the Galieo satellite positioning system. And, already, the UK is preparing speed limit database, which will be at its heart. Each vehicle will have an on-board map database (the "digital speed map"), which will then constantly compare its speed with the location's known speed limit.

EU satellite location equipment will be fitted to each car - at the owner's expense, so the Commission has found its way of recovering the costs of the system. But it will be a Trojan Horse. This is tracking technology. Built into every car, it will also provide the fundamentals for satellite-based road charging.
As always, though, Big Brother fears are being played down. This is "merely a tool to enable the driver to comply with the speed limit".  There is even an idea of calling it "In-Vehicle Speed Support".

Yet, despite the longevity of the plans, only now, once there is the name of a British politician to put to it, does the proposal become news, with the Mail noting that Transport Secretary Patrick McLoughlin is said to have "erupted" when the proposals landed on his desk. If the paper is to be believed. he has told his officials to block the moves.

A Commission report is now expected in the autumn, and then, possibly, there will be more legacy media coverage. But, no matter what the media do and how much the politicians squawk, the die was cast once the members states agreed to Galileo and allowed it to be funded.
Now the system lies within the realms of possibility, it will be used. And with road safety being an EU competence, agreed by QMV, there is nothing UK politicians can do to stop it, even if they wanted to. And despite McLoughlin's protestations, the UK is already making the technical preparations, with TfL having already produced digital speed maps. Far from trying to stop its introduction, it looks as if our Government is an enthusiastic partner with the Commission.

While others get worked up about cigarette pack sizes, though, this idea may upset a lot more people. One might even suspect that the day when we finally leave the EU is getting closer.