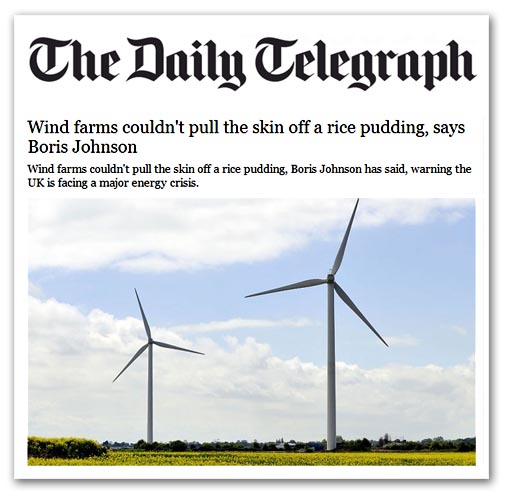 Boris Johnson is at it again. Having recently had a pop at the warmists, conveniently forgetting his earlier stance, he is now having a go at wind energy.

"Labour put in a load of wind farms that failed to pull the skin off a rice pudding", he said. "We now have the opportunity to get shale gas - let's look at it. It is part of the 2020 vision we have for this city - power generation is vital". 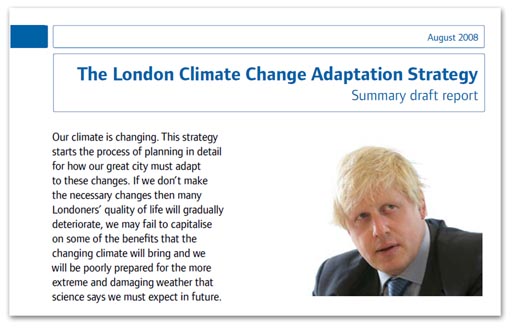 Yet this is the very same Boris who in August 2008 introduced London's first Climate Adaptation Strategy. In his foreword (above), he declared:

Our climate is changing. This strategy starts the process of planning in detail for how our great city must adapt to these changes. If we don't make the necessary changes then many Londoners' quality of life will gradually deteriorate, we may fail to capitalise on some of the benefits that the changing climate will bring and we will be poorly prepared for the more extreme and damaging weather that science says we must expect in future. 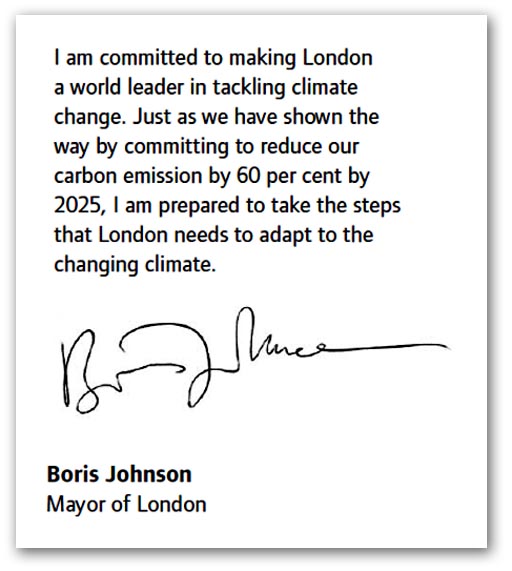 Among those steps was to convene a forum of "key stakeholders" in London responsible for green spaces to develop an "urban greening programme" for London. And amongst the things that was going to do was to "identify opportunities for green spaces to provide renewable energy (biomass and wind) ".

Thus we were told, "the Mayor's commitment to reducing carbon emission by 60 percent by 2025 through increased energy efficiency, use of decentralised energy and renewable energy will improve London's energy security". 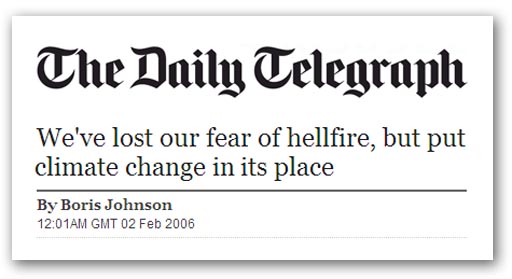 And yes, this is the same Boris Kohnson who in February 2006 was dissing the "the fear of climate change", declaring it to be "a growing world religion". With the London mayoral election two years ahead, pitting himself against warmist Ken Livingston, our Boris took on the fears of "green prophet James Lovelock", airily telling his readers that, if Lovelock was "completely right" in his fears, "there is not a lot we can do, and we might as well enjoy our beautiful planet while we can".

And now, having giving up making London a "world leader in tackling climate change", Boris has climbed back on the climate sceptic bandwagon. He has abandoned his quest to cover London with windmills and is now dismissing the Government's efforts to replace closing coal stations with wind power and nuclear.
Shale gas offers the best opportunity for a secure supply, says the born-again sceptic. It really is quite amazing what a difference a few years can do for an opportunistic politician - and how short public memories are.