Energy: not so good and not so bad news 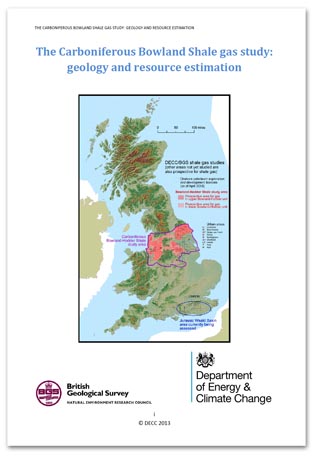 It was never going to be the case that the media was going to plough through a 64-page technical report on shale gas reserves, produced by the British Geological Survey (BGS). Nor were the media ever going to reproduce the cautious phrasing of the report, and convey the news with all the scientific caveats.

Thus, we have good news, conveyed by Reuters and others, which tells us that the Bowland-Hodder shale holds 1,300 trillion cubic feet (tcf) of gas.

This latest estimate indicates shale gas, says the agency, could transform the UK energy market, even though typically only 10 to 15 percent of shale gas in place is recoverable. It compares with British consumption of 2.76 trillion cubic feet last year, giving us potentially 60 years of supply, at current consumption rates.

This compares with recent estimates suggesting that there could be as much as 500 tcf in the Bowland shale across the North West. The actual range for the entire deposit stands between a low estimate of 882 tcf, 1,329 tcf for the mid-level estimates, and 2,281 tcf at the high end. Potentially, we could have 100 years-worth of supply.

However, the cautious tenor of the report brings us down to earth, with BGS refusing to estimate extraction rate, saying that a "bottom-up" resource assessment of gas in-place has be made, which more accurately reflects the area's shale gas potential.

The large volume of gas has been identified in the shales beneath central Britain, but not enough, says BGS, is yet known to estimate a recovery factor, nor to estimate potential reserves (how much gas may be ultimately produced). Thus, beyond a very early estimate of 4.7 tcf yield, the Survey is prepared to go no further.

Thus, this news is good but not yet as good as it could be. But it is at least good news, compared with Ofgem's "Electricity Capacity Assessment Report 2013", also published yesterday - the second such report Ofgem has produced. But again it was never going to be the case that the media was going to plough through the full report, this one being 122 pages long and largely devoid of media-friendly language. 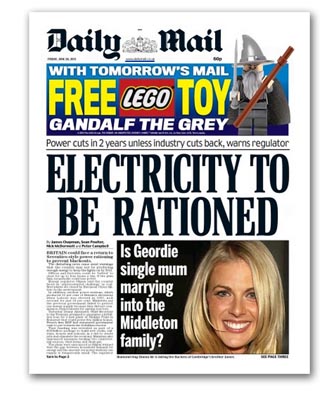 This, however, has not stopped reporters telling us that the "risk of UK blackouts has tripled in a year", as well as us "facing an energy crunch that will push up bills". The Daily Mail goes even further, telling us of "power cuts in two years" and that electricity [is] "to be rationed", with a front-page banner headline breaking the news.

Looking at the detail of the report, though, we see that the projections are based on computer modelling, offering a range of scenarios. These illustrate the impact of "projected demand reductions not materialising", and the effect of "high demand sensitivity that uses National Grid's broadly flat demand projection from last year". We also get a "low supply sensitivity" scenario, with "pessimistic assumptions on the supply side".

On the basis of an assumption that there is higher than expected demand, and factors interfere with price mechanisms that pull more capacity into the market, there is a possibility that the "expected volume of demand that may not be met because of electricity shortfalls".

Even that is not as bad as it sounds, though. Controlled disconnections of customers - involving industrial and commercial sites before households - would only take place, says Ofgem, if a large deficit were to occur.

This, we are told, is because the System Operator is usually able to manage supply shortfalls up to a certain level with little or no impact on customers, such as by making use of emergency interconnector services that involve increasing imports, and reducing exports where possible.

Thus, while there is indeed a possibility of power cuts, the pessimistic assumptions attendant on the modelling make these a worst-case scenario for the moment. And, given that shale gas may be coming on line, which may create incentives for building new gas plant, the situation might not be anything like as as bad as is painted.

In short, we have some not so good and some not so bad news.  But that wasn't good enough for our legacy media, so we were treated to unqualified projections.  Fortunately – in the age of the internet – we can see the original reports, and make up our own minds on whether to read the facts or the spin.