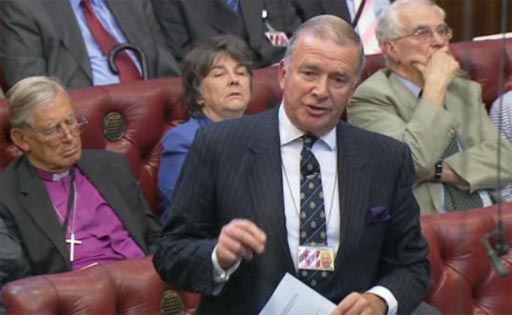 One can understand if not sympathise with former senior military personnel expressing concern over the recent judgement on Snatch Land Rovers and other matters. This was the one that allowed families of soldiers killed in Iraq to pursue damages against the government under the Human Rights Act.

But one draws a line at former First Sea Lord, Lord West (pictured) who declares the judgement "totally bonkers". Now a Labour peer, Lord West cited his own experience in the Royal Navy and added: "it's the duty of military men to fight the war they are in with the equipment they have... It's clearly a total nonsense that one can use human rights legislation to go against that".

The thing is that it is perfectly valid to disagree with the judgement, but public figures such as Lord West – if they are to do so – should read the judgement first and endeavour to understand it.

Had he done so, he would have found that there is nothing in the judgement, per se which makes any commander, or indeed the MoD, liable under law for requiring military men to fight with the equipment they have available – if it is the case where only particular equipment is available and there are no alternatives.

What the Sue Smith Snatch case rehearses is the scenario where there is alternative equipment available or, with reasonable foresight and planning, that equipment could have been available, and it is not used or made available.

In deciding which equipment to use, the question must be asked as to whether the military authorities could reasonably have foreseen the risks to which soldiers were exposed. In the case of lightly armoured Snatches, they should have asked themselves whether it would have been possible to provide alternative equipment - without prejudicing the success of the military operations – while reducing the risks to the soldiers.

Points to take account of are several and varied. Firstly, the Snatches were not designed for combat operations, as such, but for routine patrols in operations more akin to policing. Secondly, the patrols were not one-off events but a routine, repeated month after month, year after year in the same manner with the same equipment.

Then, the threats to which the soldiers were exposed were not sudden, unexpected, nor impossible to counter. There had been a slow build-up in hostilities and the nature of potential threats was well known in theatre. To deal with the threats, there were several countermeasures and defences which could, with reasonable foresight, have been provided.

As to lawyers "second-guessing" military decisions, the judges were well aware of the "real distinction" between actual operations against the enemy and "other activities of the combatant services in time of war".

There is no question of being able to second-guess decisions made during actual operations but the judges have ruled that, just because decisions are made "in time of war", that should not necessarily exclude all such decisions from legal liability. Those who made decisions still had to pass the test of applying  a "standard of care that is reasonable under the circumstances".

In 71 pages, the judges have offered their reasons for the judgement. They are tightly argued and compelling. West disagrees with the judgement, which is fair enough, but to say it is "totally bonkers" or "total nonsense" is simply to diminish his own standing and credibility.

Allowing anyone in authority a "free pass" to make poor decisions, with no comeback, is never sound - and should be permitted only in the most exceptional of circumstances. Just because the military brass have pretty uniforms and their sewing badges shouldn't make any difference.
Thus, reining in the military, and making them more accountable, in circumstances where it is entirely reasonable to expect sensible and careful decisions, is not "bonkers", total or otherwise.  We owe those who serve, no less than that.