EU politics: hubris in the making 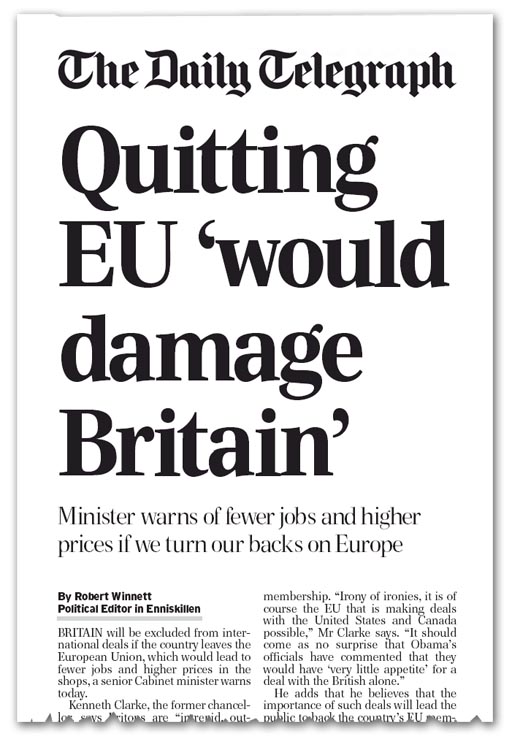 Mr Cameron is playing the EU-US deal extremely big, and the media are giving him his head. Yet, for the prime minister, this is something of a risk. As we pointed out earlier, there are so many imponderables that the end cannot be predicted.

However, we are also seeing Kenneth Clarke leap into the breach, exploiting the pro-EU potential to his own advantage – or so he thinks - and given front-page lead story treatment in the Telegraph.

He is saying that this country will not be able to participate in the deal - and others - without its single market membership. "Irony of ironies", he says, "it is of course the EU that is making deals with the United States and Canada possible". Thus does Clarke say, "It should come as no surprise that Obama's officials have commented that they would have 'very little appetite' for a deal with the British alone".

We've been there before, of course, and it is a reflection of how badly the media is handling this issue that it has failed to point out that our single market membership is not dependent on our continued membership of the EU. This is actually a US-EEA deal, so it will apply to EFTA members of that agreement as well.

But if the media can't deal with the facts and keep the public informed, its uncritical - and high  profile - pursuit of this story has the potential to backfire dramatically. Any sanguine analysis of the chances of the US-EEA deal being successful has to conclude that current sentiment is overly optimistic.

As currently presented, we are being told that the deal is set for completion in two years, but simply to look at the complexities confronting the negotiators makes that prediction wholly unrealistic.

Then, as more information on the impact of the deal, the ramifications and the potential winners and losers emerge, political battle-lines will begin to be drawn. Positions will harden and opposition will mount.

The French strop over the film and digital sectors is only a rehearsal for things to come. Even that has had considerable repercussions, with the Financial Times telling us that the G8 summit has been overshadowed by the row over "reactionary" French protectionism.

Barroso has taken a swipe at the French, declaring that, "Some say they belong to the left, but in fact they are culturally extremely reactionary". He added that critics of liberalised trade in films and music had "no understanding of the benefits that globalisation brings also from a cultural point of view".

Jean-Christophe Cambadélis, one of Hollande's senior officials, described Barroso's remarks as "bewildering and intolerable". An EU spokesman then said that the Commission president's comments were "aimed at critics of the commission's liberal stance", not the Hollande government.

This, though, is a tiny spat, and nothing compared with what will happen when we get to agriculture. Then the fun will really start. Apart from anything else – such as the different stances on GM crops - there is a huge mismatch in animal welfare standards between the US and the EU. And neither side will be minded to change their positions, because the economic implications are huge.

Take the difference in housing standards for battery hens, for instance. This allows US eggs to be sold out for 20-30 pence a dozen cheaper than their European equivalents. Yet, the shipping cost for a dozen eggs on a Jumbo Jet freighter is around five pence. A free-for-all would savage the European egg industry, and that is just one of the sectors that would be hit. The Europeans simply are not going to tolerate this.

As time goes on  and the talks begin to stall, optimistic stories will be replaced by tales of delays, bad feeling, and political infighting – all focused on the failure of the EU to close the deal. From being the current EU "good news" story, this will become a millstone round Mr Cameron's neck, and he will be exposed to constant jibes about yet another EU mess.

Furthermore, as it becomes more and more clear that the British government is a mere bystander, and the negotiations are between the European Commission and the US, the deal will come to mark British impotence, as we are forced in to positions that are dictated by others.

For the moment, though, the likes of Kenneth Clarke will have their fun. All we have to do is bide our time, as the expectations drain into the sand, and the hubris is seen for what it is. The "landmark deal" will never materialise. Instead, it will become a graveyard of false expectations.