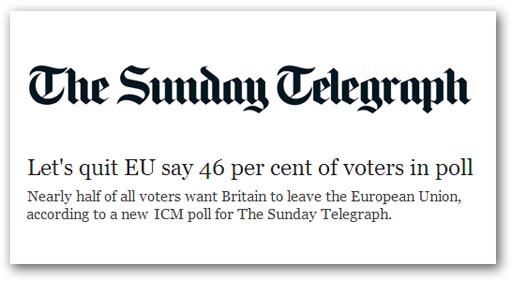 The Telegraph Media Group Ltd is citing an ICM poll today which has 46 percent of respondents saying they want to leave the EU, as opposed to the 30 percent who want to remain – giving a 16 point margin in favour of withdrawal.

In the Independent on Sunday we have the results of a ComRes poll and it also puts the number wanting to leave at 46 percent, as opposed to 25 percent who want to stay in. That gives us a slightly healthier margin of 21 percent.

Taking that last finding, on the face of it, the margin for staying in the EU following renegotiation has strengthened from eight percent just over a year ago, to 19 percent currently, in what could be considered a boost for Mr Cameron.

But the main findings are nothing to write home about either. The 16-point ICM margin compares unfavourably with the Mail on Sunday poll last October, which gave a 17-point lead to the "outers". But, when the YouGov poll in July 2012 also gave the "outers" a lead of exactly the same 17 points, one can conclude that sentiment is not moving a great deal.

One can take greater comfort from the ComRes poll and its 21 percent margin, but that would only represent a four-point shift in a year which has seen an upsurge in support for UKIP and a supposed strengthening of anti-EU sentiment.

Here, we have to remind ourselves – as always – of the private poll conducted for the Labour Party in August 1974, which showed that, should there be a referendum on membership of the Common Market, 50 percent would vote to leave, against 32 percent who would vote to stay in, a "huge" lead of 18 points.

At around the same time, Gallup confirmed these proportions, with a poll coming out at 47-30 percent in favour of leaving, giving a lead of 17 percent, almost exactly the same as the ICM poll. And, as we well know, nearly a year later in 1975, 67.2 percent voted to stay in the EEC, while those voting to leave had fallen to 32.8 percent – a lead of over 34 percent in favour of staying in, representing a swing of over fifty percent.

What is puzzling about the current findings is the stability of anti-EU sentiment. In broad terms, it has hardly moved in years and seems largely resistant to the ebb and flow of the debate on the EU. And, if we are to take the historical precedent, the level of support for withdrawal is by no means enough to ensure a victory in any coming referendum.

Patrick Hennessy in the Telegraph ventures the opinion that 44 percent wanting an immediate referendum – as opposed to 29 percent prepared to wait until 2017 – represents a "further boost for the eurosceptic cause", but on current showing, we would most certainly lose an early referendum.

The most disturbing thing, though – given the lack of movement in the polls and the favourable response to the suggestion of renegotiation – is that we might lose a referendum in 2017 as well.

We can only hope that the opinion dynamics might change when a referendum is declared. But, if they don't, it could be too late to find out why and affect significantly the course of public opinion. Anyone truly interested in getting out of the EU, therefore, might feel some alarm at these figures, and be looking for stratagems which might improve future odds.