Immigration: the joy of independence 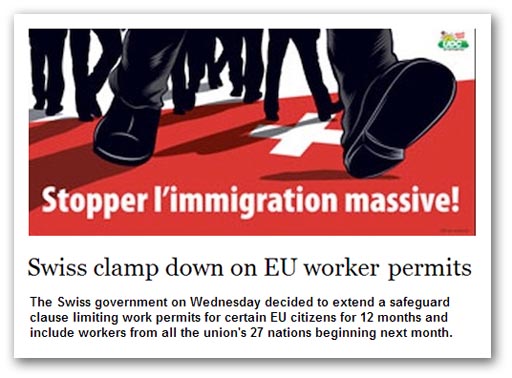 Much as we might like to do it, there is no chance of us following in the footsteps of the Swiss Federal Council which has announced restrictions for the next twelve months of workers from EU member states to the Swiss labour market.

The decision, we are told, is in response to calls from the "far right" Swiss People's Party, and comes despite the opposition of the left and the country's powerful financial sector.

The sudden announcement may also have something to do with the fact that Switzerland is a democracy and that there are two referendums pending, aimed at limiting immigration. One is from the Swiss People's Party and other from the right-wing ecological group Ecopop. Predictably, the federal government is anxious to head them off at the pass.

The trigger for the new restrictions is a recent surge in the number of southern Europeans taking up residence, especially from Portugal and Spain, with up to 80,000 extra arrivals each year. These are settling in the country as the eurozone debt crisis bites in their home countries.

And what enables the Swiss government to put up the barriers is a clause in the bilateral agreement on migration with the European Union, of 21 June 1999. This permits temporary quotas on residency permits for EU residents wishing to work in Switzerland.

In its decision, Switzerland is applying to the EU as a whole limits already in effect to newer EU entrants Estonia, Hungary, Lithuania, Latvia, Poland, Slovakia, Slovenia and the Czech Republic. Bulgaria and Romania are covered by a separate migration regime until 2016.

In a belated attempt at damage limitation, Social Democratic justice minister Simonetta Sommaruga tells a rather unhappy Brussels, "the EU is and will remain our most important partner". But, she says, "It's a fact that there is unease among the population, and it's necessary to take this unease seriously". Can one imagine a British minister using such words?

Catherine Ashton responds by saying she "regrets" the move and underlining the "great benefits" of EU-Swiss work mobility. She also notes that the split in permit quotas between the EU8 and EU17 groups is contrary to the 1999 agreement, which did not permit differentiation between EU member states.

With blissful insouciance, the Swiss government has limited to 2,180 the number of workers from the new entrant EU nations that could work in the country, at the same time holding the 17 older EU states to 53,700 for 12 months.

However, all good things come to an end, and the limiting clause is set to expire in 2014. Between then and now, though, there are those pesky referendums which could force new negotiations.

Then, perhaps we will see a clash of wills, as the people assert their rights to control their own borders – in a way that only independent status will allow.