EU politics: ripples from the AFD 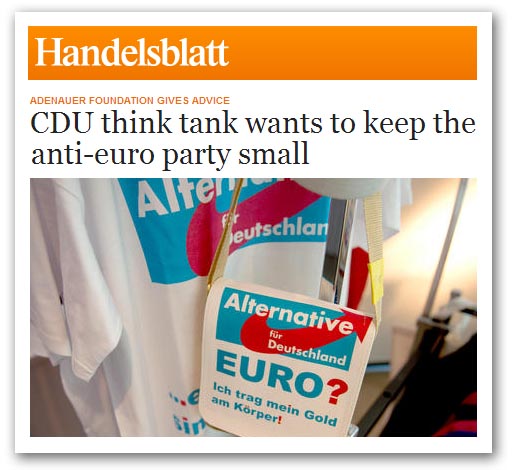 The perturbation from the launch of the AFD continues to dominate German politics, with Handelsblatt now reporting on an opinion poll that claims 19.2 percent of respondents would vote for the party.

The CDU, on the other hand, had lost a point to hit 38 percent, with its coalition partner the FDP unchanged at five percent. The opposition SPD stood at 26 percent, the Greens were on 15 percent and the Left Party was on six percent.

This means that neither grouping could form a government and all parties are keen to neutralise the AFD threat. Enter, therefore, the CDU-affiliated Konrad Adenauer Foundation, which has issued a detailed report, taking a closer look at the party, making recommendations on how to deal with it.

Above all, the Foundation says, it is very important not to underestimate the AFD, as the party had quickly gained significant media attention and a great deal of interest. This also shows that "new populist movements" can have a considerable impact and can quite quickly record political success.

In the view of the Foundation, therefore, concerns of citizens about the future of the euro should be addressed more fully in the policies of the federal government and there should be "extensive efforts to explain the policy towards the indebted euro countries, the guarantees given by Germany and the development of European institutions".

On the other hand, the Foundation warns that "single-issue parties such as the AFD benefit from ongoing public debate. But many of the supposedly alternative political demands have long been debated between the parties in the Bundestag and it is questionable whether many voters really share the "pessimistic analysis" of the AFD about the situation in Germany.

According to research carried out by the Konrad Adenauer Foundation, citizens are more satisfied with their personal material situation, even if they are starting to worry about the overall situation".

No one should shy away from a substantive discussion about the AFD, the Foundation then counsels, especially as the party had no more to offer than a "mini-programme and seemingly simple solutions". Moreover, the AFD competes over their single issue with other parties such as the liberals.

But there is also advice about accelerate the disenchantment with the new party. Its founding congress has clearly shown that it has failed to implements its own self-proclaimed goal of "more democracy". Its rigid process of dealing with nearly 200 applicants who had registered for the election of its Board was very far from ideal.

Thus does Handelsblatt put the boot in, but you would not think so from the coverage of Suddeutsche. It actually rails against Handelsblatt pushing the AFD, overstating its share of the polls.

The 19 percent support, reported, it says, was based on a flawed question which flattered the party, making the survey "unfortunate" and "suggestive", blatantly violating the rules governing survey institutes.

Whether exaggerated or not, though, the AFD – for the moment – is punching above its weight. Says columnist Wolfram Weimar, the Left-right insults them as reactionary. The Liberals vilify them as nationalistic. The Union ostracises them as irresponsible, the Greens joke about " protest professors" and the Pirates brand them the "D-Mark grandpas". They have provoked the partisan establishment, and have shaken the political scene within a few weeks.

And, for the time being, you can't ask more than that.