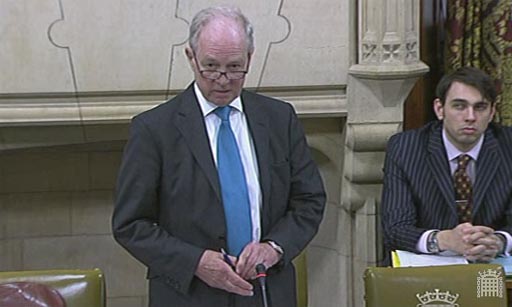 Peter Lilley took on the climate change committee, the government and the whole intellectual establishment in this country in a Westminster Hall debate yesterday, complaining that they were living "in a dream world on energy and climate change issues".

The debate was about last July's report from the Energy and Climate Change Committee on "The Road to UNFCCC COP 18 and beyond", available also on Parliament TV.

"COP" in the jargon beloved of the Warmists, stands for Conference of the Parties, the periodic jamborees at which decisions are supposedly taken to save the planet from the dreaded scourge of global warming. To these Lilley was referring and, of course – unlike Dellers - was speaking to the deaf during this debate.

Nevertheless, making the most of his opportunity, Lilley opened his contribution by remaking that those whom the gods wish to destroy they first make mad. One of the early signs of madness, he then said, "is an indulgence in compulsive displacement activity, which could not be a better description of the whole COP process".

And here we get a description that should be bottled and sold. It was wasted on the gang of disparate Warmists gathered in Westminster Hall. Said Lilley:

Tens of thousands of people are displaced across the globe to an environment where they are cut off from reality and the rest of the world, where they can indulge themselves in demonstrating their lack of realism and reality, and where the original objective of obtaining a legally binding agreement between nations to reduce worldwide emissions has itself been displaced by the alternative objective of reaching an agreement to meet again - and to agree to reach an agreement at some distant future time.

That, Lilley remarked, "is displacement activity on a massive scale, and it involves a massive degree of hypocrisy, given the huge emissions incurred by these eco-warriors as they swan across the globe in jets and hire fleets of limousines, so emitting more CO2 than a small African country".

Then we get to the money quote: "the aim of displacement activity is of course to avoid facing up to reality", we were told, with Lilley then accusing the front-bench speakers of being "united in their lunacy".

Sadly, the only response was for successive speakers to live up to their description, going out of their way to avoid facing up to reality. But when we got the minister, Greg Barker, he managed to excel himself in demonstrating his total disdain for public opinion.

Grandly declaring that, of course, "we" – the assembled MPs - "are here to listen to and represent our constituents", he quickly averred that "we also have a leadership role". Defying public opinion, it seems, is "leadership" and, to support this contention, Barker called in aid no less than the Margaret Thatcher, her ashes not yet cool from the crematorium.

"If ever we were reminded of the importance of not bending to public opinion in the short term, but aiming for the right long-term solution", said Barker, "it was this week, with the funeral of Lady Thatcher, who understood that being unpopular in the short term and not listening to the crowd can often not only be the sensible and right thing to do, but pay dividends in the long term".

Shamelessly, Barker went on to call in aid Thatcher's early advocacy of action on global warming, noting that her actions "led, in large part, to the Rio Earth summit of 1992 and to the UNFCCC process that continues today".

And there speaks dishonesty, the nature of which has become so much part of our political discourse. No honest person could mention Thatcher's role in this issue, without also mentioning her recantation (as highlighted by Booker), but then Greg Barker is not an honest person. He is a Warmist.

But at least we get some inkling of the mindset. Accused of living "in a dream world on energy and climate change issues", and thereby totally detached from reality, Barker describes this as "leadership", relying on selective quoting from a real leader to make his point. And that is what passes for politics these days.