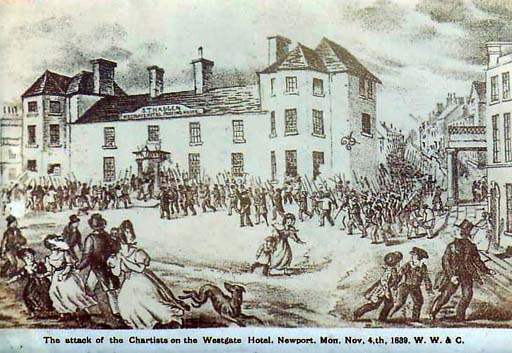 After launching the idea of the Harrogate Agenda last year, with the publication and subsequent approval of our six demands, things on the surface have been quiet – and deliberately so. We are in for the long haul and have decided to make this our foundation year, setting up the structures and refining the message, ready for a modest launch in September.

We could, of course, go faster, and some of our supporters argue passionately that we should. But the worst thing we could possibly do, in my estimation, is run before we can walk. History is littered with examples of campaigns that rise out of nowhere, achieve a degree of fame and then disappear as fast as they have risen, achieving nothing of consequence.

Here, one must remember that the Chartist Movement, on which we are loosely based, published its demands in 1838. A petition was presented to Parliament in July 1839, and in November 1839 came the "Newport Rising", a premature event which was a disaster for the movement.

Arguably, far from the cause being advanced, it was set back by the early activism to such a great degree that it was not until 1918 – eighty years after the first publication of the demands – that all but one were met, with the advent of universal suffrage.

The crucial point, from which we can take comfort, is that the tide of history is with us. As Witterings from Witney never tires of pointing out, the "representative democracy" on which our government relies for its legitimacy is increasingly seen as an anachronism, totally unsuited to the needs of the time.

In that context, despite the ephemeral fluff which is the obsession of our own media, what may be two of the most significant political events to emerge in recent years have occurred abroad – one in Switzerland, the other in Germany.

The first – barely mentioned in the UK – was the Swiss referendum on executive pay, followed by the considerable interest shown by the German media and political classes, which continues today with a major feature in Welt am Sonntag, where they are looking enviously at the Swiss (below).

At the core of the Harrogate Agenda, or course, is the principle of "direct democracy", very much on the lines of Swiss democracy, borrowing from that country but not entirely copying it.

But what is significant about the recent Swiss referendum is that the mood is catching. As we noted yesterday, the new opposition group in Germany, the Alternative für Deutschland (AFD), has embraced the idea of direct democracy. It demands referendums on fundamental social issues. "Blatant bad decisions by our elected officials", it says. "need to be corrected. This especially applies to the assignment of important powers to the EU".

And here, an important theme begins to emerge. The AFD is the first specifically eurosceptic party to emerge in Germany. With a commitment to direct democracy, it confronts one of the core principles of the European Union, as specified in Article 10. This states that: "The functioning of the Union shall be founded on representative democracy" and that: "Citizens are directly represented at Union level in the European Parliament".

In other words, the AFD commitment to direct democracy, and indeed the Harrogate Agenda commitment, are incompatible with continued membership of the European Union. Direct democracy and the European Union cannot exist side-by-side.
With unintended irony, the Treaty says that, "Every citizen shall have the right to participate in the democratic life of the Union", then telling us that, "Decisions shall be taken as openly and as closely as possible to the citizen". What it does not allow for is that decisions should be taken by the citizens.

Given that the European Union is our supreme government, this necessarily requires for the Harrogate Agenda to succeed that we first remove ourselves from membership of the European Union. This means that, in terms of any future "in-out" EU referendum, we very much have a dog in the fight.

In fact, not only does pursuit of the Harrogate Agenda require departure from the EU, it also gives us the reason for leaving. Direct democracy is an objective worth pursuing in its own right. If the price of gaining this objective is leaving the EU, that is extremely good value.

However, linkage between the EU withdrawal and the Harrogate Agenda also tends to influence the timing and the strategy of the latter.

What we must bear in mind is that, sooner or later, there will be an "in-out" referendum. At its earliest, it will be 2017, but then only in the event that the Conservatives win the next election – which looks increasingly unlikely. This notwithstanding, we must assume that, at some time in the future, there will be a referendum.

In any such contest, it will be necessary that THA (as we are beginning to call ourselves) is an active player. We would expect to be a key member of any coalition which formed to the official "no" campaign, and to promote the Harrogate Agenda as one of the positive reasons for leaving the EU.

Thus, in our view, the immediate objectives of THA are best served by forging an alliance with putative "no" campaigners, and ensuring that we have a seat at the table in any discussions about building a fighting coalition.

All of that suggests that we pace ourselves carefully, focusing initially on EU issues, and using them – and any "no" campaign - as a springboard for a full-blown Harrogate Agenda campaign. Through this, leaving the EU ceases to become an end in itself (thereby ensuring the failure of any campaign) but a means to an end.

On that basis, our target for a modest launch, with the infrastructure in place, by September, is a measured response to the need to mount a long-term campaign. And if UKIP, after 20 years and the expenditure of millions has yet to gain its first MP, for us to spend a year or so building our structures hardly seems extravagant.