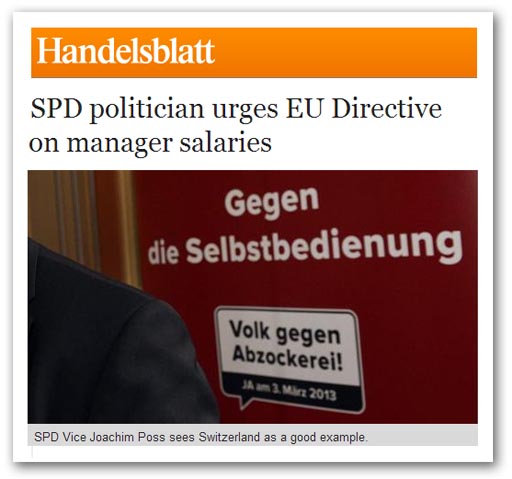 The "little England" tendency in the British media is in full flow today as the results of the Swiss referendum on executive wages are treated with scanty disdain. We see nothing but bland reports with sparse editorial comment, which includes a "rattled" Economist and no political follow-up worth talking about.

It takes Jon Snow in his error-strewn Snowclog to represent the broadcast media. He observes that the government, "so keen to test public opinion on Europe", would never brook such a test of public attitudes to banking remuneration and working practices in the UK. The Swiss, he says, have often been ridiculed for their love of referendums. Not any more.

Certainly, in Germany, there is no ridicule. The media give the referendum full coverage, many newspapers offering several stories, while the politicians have been quick to react, sparking a vibrant debate.

Thus, Handelsblatt led on SPD Vice Joachim Poss, retailing a report from Neue Osnabrücker Zeitung, which had him saying, "The referendum is an important step in the right direction to meet the rip-offs in management elsewhere".

Such is the emasculation of the German political classes, though, that Poss, instead of calling on the Federal Government to introduce a new law, called for an EU Directive, perhaps oblivious to Article 153(5) of the Treaty, which makes it clear that the EU cannot legislate on pay.

But, when it comes to views of the referendum result, though, even the CDU economist Michael Fuchs approves. According to Die Zeit he is happy that salary decisions should not be taken by the state. "The shareholders know exactly what they can afford", he says.

Green party leader Jürgen Trittin said that Switzerland was "a model for the compensation excesses in the financial sector" and wanted stricter rules in Germany would "stricter rules" are introduced. Sahra Wagenknecht, deputy parliamentary leader of the Left Faction asked Germany to take action. Her country, she said, was "a paradise for executives, undermining the merit principle".

The North Rhine-Westphalian FDP chairman Christian Lindner criticised the multi-million bonuses paid by Deutsche Bank, calling for "a sense of responsibility". That was echoed by economist Michael Huether from the Institute of the German Economy in Cologne. While welcoming the public debate, his view, "instead of more laws, we need more boards of directors and board members who take personal responsibility".

But it is precisely because the "thieves in suits" are devoid of any sense of personal responsibility that the people of Switzerland felt impelled to act. And, it appears, they haven't finished yet.

Piggy-backing on Minder's success, the Swiss Young Socialists are campaigning to prevent executives from being paid more than twelve times the wage of their lowest-paid employee. A referendum on this is expected in the second half of this year, the group says.

That formula would be particularly appropriate to the public sector, with a complete prohibition on performance bonuses, non-contributory pensions and excessive payoffs.

But what a contrast we are seeing. While the Swiss people are able to force action, we are forced to rely on laborious progress of Mr Pickles, doing very little very slowly. Such are the joys of representative democracy. No wonder the British media, guardians of the status quo, are reluctant to talk about it.