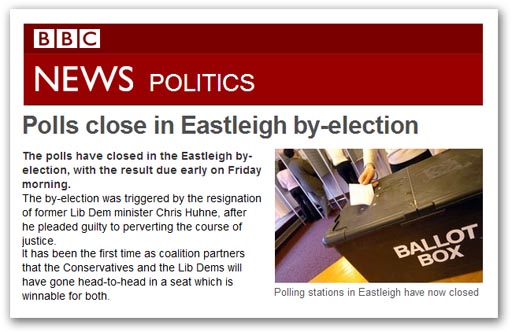 More than usual hyperventilation has attended this by-election, with some pretty bizarre predictions, even by the rather low standards of British political commentary. For what it is worth, my (private) prediction was that the Lib-dims would romp home, the Tories would come a poor second, Labour third and UKIP would keep their deposit with about seven percent of the vote ... all on a very low turnout of 40 percent.
But then, I was certainly wrong on the turnout, as early reports put the it at 52 percent. This is higher than I expected although low in contrast to the 69.3 percent cast in the 2010 general election. All the same, no one at the beginning of the count was expecting the earlier tosh about UKIP winning to materialise, although there was still some expectation that UKIP might make second place.
As always though, the postal votes were set to play a crucial part, with 14,000 issued, and the Lib-Dems expected to take the lion's share.  Given that most of these votes were in before the latest groping controversy, that vote was expected to be fairly solid.

UKIP had to beat Ray Finch's 2010 performance, when he took 1,933 votes, taking 3.6 percent of the votes cast, losing his deposit. In the 1997 election, the Referendum Party fronted Victor Eldridge and took 2,013, also coming in with 3.6 percent of the votes. Thirteen years had not delivered any appreciable enhancement in eurosceptic sentiment in Eastleigh.
The talk though is of UKIP becoming the reservoir of the protest vote, and in particular capitalising on concerns about immigration.
And, at just after 2.30 am, the result came through. The Lib-Dems did indeed romp home, coming in with 13,342 votes, against the second comer at 11,571 votes - UKIP.  Second place for Farage's party, nearly a thousand ahead of the Conservatives at 10,599.  Labour trails at 4,088 votes. So much for my powers of prediction.
Mike Thornton's vote of 13,342 votes compares with Chris Huhne's 24,966 in 2010, yet Thornton talks of a Lib-Dem "mandate", having dragged in a pitiful 32 percent of the votes cast, and 17 percent of the electorate of 78,313.  UKIP's great victory amounts to 28 percent of the votes cast, or 14.8 percent of the electorate.
This is a victory of sorts - bald men fighting over a comb, squabbling over a diminishing quantum, where an MP goes to parliament with a "mandate" of 17 percent of the electorate.  It never was democracy.  Now, it isn't even representative.