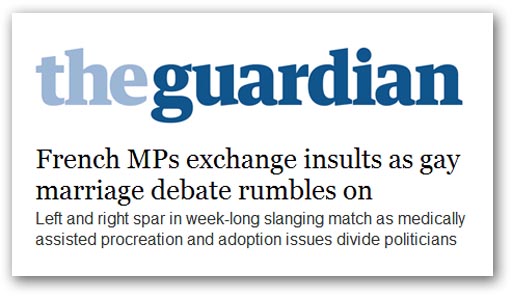 Acute observers have noticed that David Cameron is not alone in his obsession with homosexual marriage, with the French National Assembly last week having approved the most important article of a bill to legalise same-sex marriage, and the political fall-out continuing (above).

Same-sex marriage has already been legalised the Netherlands, by Norway and in Germany, where the constitutional court has recently strengthened the rights of homosexual couples, giving them a same tax benefit as heterosexual married couples. That country, rather like Britain, is currently "mired in an escalating debate on the status of homosexual partnerships".
Given the Europe-wide interest, which also includes Spain, Belgium, Sweden, Portugal, Iceland and Denmark, it is not untoward to ask whether there is an EU dimension in all this. The answer is "not directly". There is, however, a very strong "European" dimension and a UK link. But to find it you have to go not to Brussels but to Strasbourg and the Council of Europe (CoE). 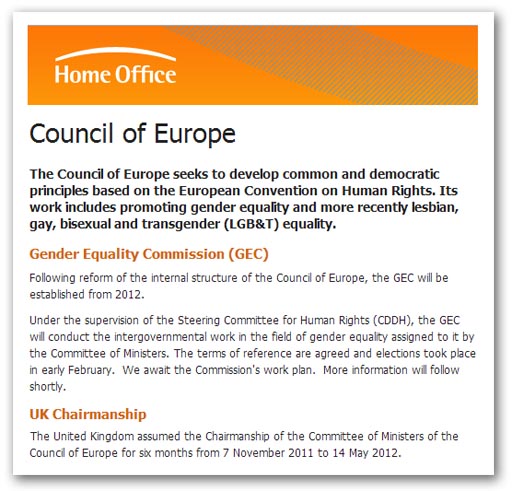 The clue is in the tidied-up screen grab above, where the Home Office tells us of the Council of Europe and its work, which "includes promoting gender equality and more recently lesbian, gay, bisexual and transgender (LGB&T) equality".

There also we find that United Kingdom assumed the Chairmanship of the Committee of Ministers of the Council of Europe for six months from 7 November 2011 to 14 May 2012, whence we cut to the statement of priorities for the UK chairmanship, in which Minister for Europe David Lidington declares:

… the Government has repeatedly made it clear that human rights are central to its foreign policy. We aim to be an example of a society that upholds human rights and democracy, and we are committed to strengthening the rules based international system.

For the detail of those fine aspirations, one has to go to the formal statement, where the preamble tells us:

The United Kingdom is proud to be assuming the Chairmanship of the Committee of Ministers of the Council of Europe from 7 November 2011. As a founder member of the organisation and the first country to ratify the European Convention on Human Rights, the UK takes the responsibility of the Chairmanship, which it last held in 1993, very seriously. We see it as an opportunity for the UK to play a leading role in the vital work of the Council of Europe in promoting rights, democracy and rule of law across the continent.

Within this, we then find that the "overarching theme" of the Chairmanship was "the promotion and protection of human rights", with a "particular focus" on developing practical measures in a number of areas, one of which (of six) was, "combating discrimination on the grounds of sexual orientation and gender identity". 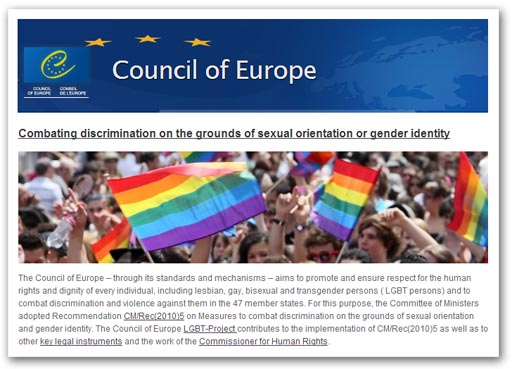 Meanwhile, things had already been warming up in Strasbourg, which now has its own dedicated LGBT project. On 31 March 2010, this had got accepted "Recommendation CM/Rec(2010)5 of the Committee of Ministers to member states on measures to combat discrimination on grounds of sexual orientation or gender identity".

Amongst other things, it referred to the ECHR and "other international jurisdictions", which "consider sexual orientation a prohibited ground for discrimination and have contributed to the advancement of the protection of the rights of transgender persons", and then recommended members (including the UK) to:

1. examine existing legislative and other measures, keep them under review, and collect and analyse relevant data, in order to monitor and redress any direct or indirect discrimination on grounds of sexual orientation or gender identity; and

2. ensure that legislative and other measures are adopted and effectively implemented to combat discrimination on grounds of sexual orientation or gender identity, to ensure respect for the human rights of lesbian, gay, bisexual and transgender persons and to promote tolerance towards them;

This is not quite the smoking gun, but this is to be found in the same document, viz:

23. Where national legislation confers rights and obligations on unmarried couples, member states should ensure that it applies in a non-discriminatory way to both same-sex and different-sex couples, including with respect to survivor's pension benefits and tenancy rights.

24. Where national legislation recognises registered same-sex partnerships, member states should seek to ensure that their legal status and their rights and obligations are equivalent to those of heterosexual couples in a comparable situation.

Although these were framed as "recommendations", they were headed "Right to respect for private and family life", which makes them, effectively, the CoE official interpretation of Article 8 of the ECHR. To all intents and purposes, it has the effect of treaty law – certainly as far as the UK is concerned.
The description of "recommendation" certainly belied the status of the document. The European Parliament Directorate-General for Internal Policies called it "a significant soft law commitment on rights of LGBT persons". The EU Agency for Fundamental Rights (FRA) thought the recommendation provided "useful guidance" to EU Member States for improving the respect, protection and promotion of LGBT rights.
The LGBT lobby in the Council of Europe, however – which had acquired its own website was also able to invoke Protocol 12, explained in detail here, which set out in Article 1&2, that:

1 The enjoyment of any right set forth by law shall be secured without discrimination on any ground such as sex, race, colour, language, religion, political or other opinion, national or social origin, association with a national minority, property, birth or other status.

2 No one shall be discriminated against by any public authority on any ground such as those mentioned in paragraph 1.

This effectively, by solemn international treaty, requires parties to permit same-sex marriage, with all the attendant legal rights afforded to heterosexual couples. 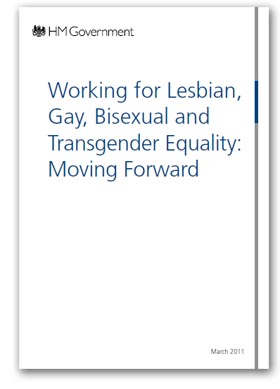 On the UK front, homosexual marriage was not on the coalition work programme published in June 2010, and it did not - as a formal or even published government aspiration - pre-date Recommendation CM/Rec(2010)5.

Even by the end of of 2010, there was no publicly expressed expectation of imminent legislation on same-sex marriage, with campaigners instead planning on launching a legal challenge in the ECHR.

It was not until March 2011, in anticipation of the UK's Chairmanship of the CoE in November 2011, that HM Government then published a report, "Working for Lesbian, Gay, Bisexual and Transgender Equality: Moving Forward" (cover pictured right).
There, on page 12, doffing a cap at Protocol 12 and, specifically, to implement  Recommendation CM/Rec(2010)5, was a commitment to, "work with all those who have an interest in equal civil marriage and partnerships, on how legislation can develop".
The actual "smoking gun" was on Page 14, with a commitment to:

This, naked in tooth and claw (to coin a phrase) is Recommendation CM/Rec(2010)5 and the timetable set for "full implementation" in June 2013, with responsibility delegated jointly to the Foreign Office and Government Equalities Offices (see below). And why is the FCO involved? That is because it involves international commitments via the CoE.

And, of course, the UK takes its international commitments very seriously. In late March 2012, the UK Chairmanship of the Committee of Ministers hosted a conference in Strasbourg, well away from the prying eyes of the media, on "Combating discrimination on the grounds of sexual orientation or gender identity across Europe: sharing knowledge and moving forward".

This "brought together activists and politicians, including ministers" and looked at how to implement Recommendation CM/Rec(2010)5.  There, with British officials attending their minister, they set the priorities, focusing on protection from hate crime and bullying, on education and employment, and on "family life and transgender equality".

And that is the real reason as to why Mr Cameron has invested so much political capital in the cause of "gay marriage". Although we have not ratified Protocol 12, we have accepted unconditionally Recommendation CM/Rec(2010)5, and undertaken to implement it by June 2013.

Having made that commitment for the Chairmanship of the CoE, Mr Cameron has no choice but to see it through. In June, there is another Committee of Ministers to consider a report on the implementation of the Recommendation, when he is to be called to account for his earlier commitment.

Mr Cameron has no intention of disappointing his LGBT colleagues in Europe. Being the good European that he is, he will do what it takes to get his Bill through Westminister.