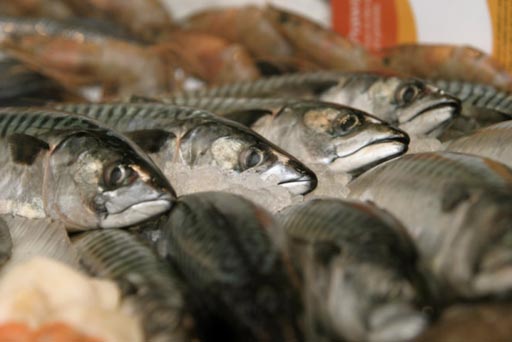 I did a broadcast for Canadian television yesterday on the referendum, telling my interrogator that the EU is a matter of detail. Unless you master that, I said, you will never really understand what is going on.
This is a theme I have rehearsed many times, and part of the fascination of the headline subject – the mackerel dispute – is that the detail is almost mind-boggling in its complexity. But what is also fascinating is the way that the so-called "eurosceptic" press has barely touched the issue, leaving it to the "soft left" such as The Guardian, which gets it completely wrong.

You would have thought, though, that with Monday's Fisheries Council meeting potentially having a major impact on British interests, the media might have taken an interest. But apart from a piece on the BBC Scotland website, and in The Scotsman, one struggles to find any significant British media interest.

Strangely, by far the best report of the day comes from the New York Times. It deals Richard Lochhead, the fisheries minister for Scotland, who has been calling for the appointment of a mediator to help resolve this three year dispute.
He is highly critical of the EU, asking: "How can the European Union, acting on behalf of 500 million people, find itself unable or unwilling to take strong action against an overfishing nation, in this case the Faroe Islands, with 50,000 people, or Iceland, with 300,000?"

Lochhead, of course, has his Scottish constituency to please, and the importance is illustrated by some statistics. Britain, we are told, has 52 percent of the EU quota and Scotland accounts for 60 percent of that. Ireland is also a major player and is feeling the squeeze.

But what is specially interesting about the NYT report is a comment from Sigurgeir Thorgeirsson, the Icelandic government's chief fisheries negotiator. He turns a narrow sectoral dispute into a major example of the inadequacies of the EU, by complaining that European officials appeared unable to grasp that the facts in the water have changed.

Iceland gets about nine percent of its gross domestic product from the fishing industry, Mr. Thorgeirsson noted, and the presence of the mackerel in Icelandic waters means other species on which the country depends are being crowded out. It is "a mackerel invasion", says Thorgeirsson. "These fish aren’t tourists. They're not coming to our waters just to look around. They're coming to feed".

On the other hand, The Scotsman has Jacob Vestergaard, the Minister of Fisheries of the Faroe Islands. He tells of a situation where, in the last decade, there have been major changes in the distribution not only of mackerel but also herring in the North east Atlantic.

The herring biomass has shifted in a south-westerly direction, leading to an increased proportion of fish feeding in Faroese waters during the summer, and for a longer period than previously.

These are the issues I touched upon in my second report of yesterday, and these are the most explicit statements yet that I have seen of the effect of the migration, underlying the fact that food supply is under huge pressure from competing stocks.

If one stands back from this for a moment, we have a situation where the bulk of the mackerel stock used to be in the waters of EU Member States, and in Norwegian territorial waters. Yet a substantial proportion of the biomass has moved into Faroese and Icelandic waters.

What is thus happening is that the EU and Norwegians, with fish having moved out of the waters under their control, are still demanding that they take ninety percent of the permissible catch. They have made no allowance for the fact that the proportion of the biomass in their waters is considerably less than that.

By so doing, and by insisting that the Faroese and Icelanders share the remaining ten percent with the Russians, the Norwegians and EU between them are effectively prohibiting Iceland and the Faroe Islands from fishing for mackerel in their own waters, insisting also that they put their own traditional stocks at risk.

In typical bully-boy fashion, though, the EU is shrieking about imposing sanctions on the Faroese and Icelanders, accusing them of "overfishing", while Thorgeirsson – quite rightly – points out that European officials appear unable to grasp that the facts in the water had changed. If anything, the EU and the Norwegians are most guilty of overfishing.

Clearly, therefore, it is the EU and the Norwegians that have precipitated this crisis. And now, after fifteen rounds of talks, we are still no closer to a solution. In fact, the problem is now getting worse, spreading to a dispute over herring quotas, with Faroe Islands delegation walking away from talks after failing to agree quotas for this stock.

Vestergaard, in accordance with the Faroe System, wants the to adapt joint herring management "to better reflect the realities of the fisheries" – which means fishing the herring hard to bring the stock back into balance with the food supply. The EU, in response, sticks to the rigid ICES mantra of maintaining a notional "spawning stock biomass", irrespective of the capability of the fishery to sustain it.

As for the original mackerel dispute, EU fisheries commissioner Maria Damanaki is under great pressure to impose sanctions, but reports on the ground suggest that she is not very comfortable with the prospect of launching the procedure.

One of the conditions required is the obligation under WTO Rules for both parties to demonstrate that they are open to negotiation and their willingness to engage in "sustainable fishing". By claiming 90 percent of the stock (even if it is in the framework of an overall quota reduction), the EU does not really seem to be demonstrating a willingness to negotiate, and is on a perilously weak footing.

Thus, the EU has done what the EU always does. It has kicked the can down the road to the February Fisheries Council, when it may or may not propose measures.

Meanwhile, British ministers are piggies in the middle. Their fishermen suffer if the dispute is not resolved, and the fish processors suffer if sanctions are imposed – all the time with the British not being able to negotiate directly with the Icelanders and the Faroese.

It would be almost impossible to invent such a bizarre situation, which is now developing into a perfect example of why we must leave the EU. At least, it would be a perfect example if the legacy media understood enough of what was going on to be able to report it properly. But then, you can't have everything in this world - and especially if we rely on the EU to dictate our fisheries policy.