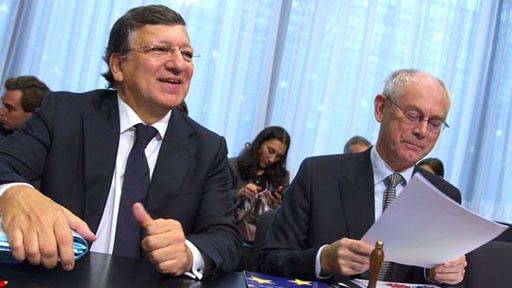 Forget the master plan - we said it was part of the pre-treaty ritual, and so it turns out to be. Even Die Zeit is pulling the plug.

And, for all the hyperventilation and the thousands of yard of extruded verbal material from all those zillions of clever-dicks in the media and elsewhere, the best forecast of what was to come out of this current European Council can be found in Süddeutsche Zietung on 4 September this year - over a month ago.

It was then, as we noted on this blog, that Merkel drew back from the idea of an immediate, formal convention to kick off the treaty process. We then reported:

Currently, through its inquiries in the other EU capitals, Berlin wants to determine whether there is sufficient willingness to launch the broad and "open" debate on Europe at the October European Council. At this stage, there would be no convention, but a "forum". The intention is that it should not be confined to "professional Europeans", but extended to national parliaments and civil society organisations - a convention in all but name.

So it comes to pass.  Forget secret squirrels, the mysterious sources, the insider tips and the access to the big names.  All it needs is good quality analysis of open sources.
The latest of those sources is an online draft of the Council conclusions. From that we see the confirmation, which starts with the acknowledgement that: "strong mechanisms for democratic legitimacy and accountability are necessary". That, decoded, means that treaty change is on its way.
Next, we see the parameters set out, as we are told that, "one of the guiding principles in this context is to ensure that democratic control and accountability take place at the level at which decisions are taken". Then we get the "action statement": "In this spirit, ways to ensure a debate in the context of the European Semester, both within the European Parliament and national parliaments, should be explored".

There's your "forum", not quite exactly as Merkel defined (the "civil society" is yet to be added) but close enough - the instruction to form it has been given.  Gradually, the strands are coming together, with the next big landmark to come in the Spring of 2014, when the EU Commission tables its proposals for a new treaty.
Then, crucially – as firmly indicated by these current Council conclusions- any treaty changes are to be applied exclusively to the eurozone. The "colleagues" are not going to give Cameron any wriggle-room. They are not going to entertain any UK renegotiation, and will face him down if he tries to push the issue.

That, with the Merkel "forum" in the making, leaves nothing for Cameron to get his teeth into. At the moment, there is not even an option for a pretend veto, as there is nothing to veto. How can you try to stop a "debate"? Any such idea is absurd.

So, the pre-ordained timetable is still in place, The actual convention will not be launched until the latter half of 2014, after the euro-elections, and a treaty will not be agreed until at least 2016. Thus, the UK referendum remains fixed, for a point well after the general election, with 2018 or later looking most likely.

In the meantime, the dance will go on. All the rest is either noise or theatre – or both.  The substantive, long-term issues have already been decided, the timing already settled.