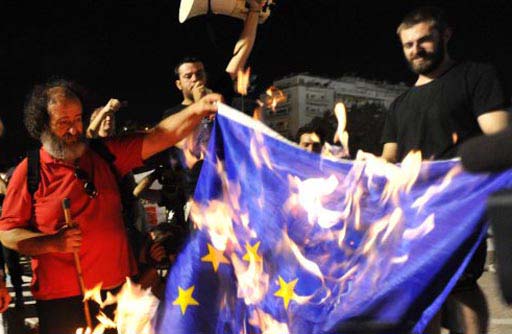 Ruminating on the absurd award of the Nobel Peace Prize to the EU, we note from Autonomous Mind that Thorbjørn Jagland, head of the prize committee, is also Secretary General of the Council of Europe.

With its stated aims, "To achieve greater unity between its members for the purpose of safeguarding and realising the ideals and principles which are their common heritage and facilitating their economic and social progress", one can see why he was motivated to award the prize to the Brussels monster.

However, it is also customary, according to Wikipedia to seek a unanimous decision if possible. And here we learn from the Norwegian paper Aftenposten that there was one member of the committee who most emphatically would not have voted for the EU.

This was Ågot Valle, former deputy leader of the "No to EU" campaign. Mysteriously, though, it just happened that when that Thorbjørn Jagland decided to call for the final vote on this year's winner, Valle was off sick, replaced by former Oslo Bishop Gunnar Stålsett, as her deputy.

Valle says she would have welcomed being called to make her vote, and says she would not have supported the EU if she had sat on the committee  but she wasn't asked to attend. Socialist Left Party leader Audun Lysbakken thus declares that "it is obvious that we now have a politicised peace prize".

MP Geir Langeland, however, used slightly stronger words. "I think it's foul and unethical", he said. It leaves "a bad taste in the mouth" he added, claiming that there had been a "Jagland coup" in the absence of Valle.

Thus in a country where 80 percent of ordinary people are against the EU, we find a committee where everybody is in favour of the EU. And unsurprisingly, many commentators now think that the prize, already damaged, has now been further weakened.

The "colleagues" themselves  who have been lobbying assiduously for the award of this prize, must have known that there would be this response, but evidently think that the kudos attached even to a tarnished award is worth the effort.

But the EU has a long history of rigging the debate and, as I said on the BBC World Service yesterday  in response to a question about the value of its peace claims - it is a parasite which is extremely skilled at claiming the credit for others' efforts.

Thus, the fact that it has gained this award under false pretences, by a "foul and unethical" coup, will not trouble it in the least. For a construct that has stolen power from 27 countries, a mere matter of stealing a Nobel Peace Prize is a very minor affair.