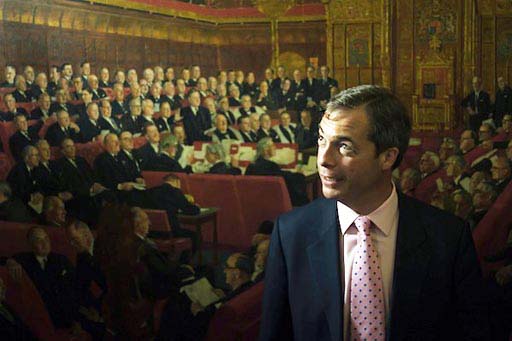 "I think we've proved that we are a serious party that cares about a lot more than just Europe", says Harold James, an active UKIP member from Weston-super-Mare, veteran of nine conferences.

Predictably, though, the Spectator is less than impressed, accusing a "Floundering Farage" of struggling a little once "away from his hobby horse of a European Union Referendum". But, had the magazine been on the ball, it could have observed that Farage was struggling even when riding his hobby horse.

That is the only conclusion one can draw from his "Referendum Stitch-Up" pamphlet. His knowledge about the mechanics if the EU was always slight, but in this production he demonstrates that he has not added significantly to his knowledge in the ten years since I worked across a desk from him.

If this was simply a matter of a vainglorious party leader doing what politicians so often do – displaying his ignorance – it would not matter so much. But, as even the Spectator concedes, we are almost certainly looking at a referendum in the not too distant future.

Rigged though it may be – and we could hardly expect otherwise – I have to believe that this referendum is winnable, and that we can successfully deliver a "withdraw from the EU" message to our masters. With contributions such as Farage's, though, we are set to lose.

To understand why, it is helpful to go back to the debate we were having on Article 50, where we argued that we need to take advantage of the negotiation process offered to draw up a relationship with the EU before finally cutting the knot.

Amongst those who disagreed with this stance was Nigel Farage, one of many who believe that we can unilaterally abrogate the treaties and then expect the "colleagues" to sit down and negotiate with us, without there being any penalty from such action.

Until now, quite how Farage managed to believe that this could be a penalty-free option has escaped me. But, if it is his settled belief that a free trade area can be set up with "a blank piece of paper", then it is unsurprising that he sets such little store on negotiation - there is only a blank sheet of paper to agree. And that attitude is what is going to lose us the referendum.

The reason why this will happen is because Farage and his supporters are preparing, in an utterly cavalier fashion, to ditch the "single market", that iconic property which legend has it was breathed into life by the Dragon Queen herself, Margaret Thatcher.

Yet, examine David Cameron's rhetoric on the European Union and you will notice the emphasis is almost entirely on preserving this mythical beast. To threaten it with extinction is to invite unrestrained enmity from the entire Tory tribe and give hostage to fortune to the other side.

And that is only part of it. The "single market" effectively comprises a huge body of EU law – directives, regulations and decisions – alongside thousands of meticulously crafted standards, which together binds the corporate world and protects it from the cold winds of competition, mainly from small and medium businesses.

Anyone who believes that big business doesn't like regulation simply knows nothing about big business. As noted in our forum, "complex regulatory structures are a significant barrier to entry, and dominant firms that can afford large compliance departments often lobby for such regulation which prevents the entry of upstart firms".

And, in their enthusiasm for more and more law, the corporates are the natural partners to the EU. If their precious body of law is threatened by a "no" vote in a referendum, they will pour massive funding into any "yes" campaign.

The best we can possibly hope for from the corporates is their neutrality, which could only be secured – of at all – by assurances that their "single market" is kept intact.

On the other hand, the genius of the EU is the way it has hijacked trade regulation and harnessed it in the service of political integration. In promoting our exit from the EU, therefore, we have to detach the corpus of standards and trade agreements from the community acquis and give it an independent identity.

This, to my mind, is one of the greatest challenges confronting the "outers" in any referendum campaign. It is also one I believe we can deal with by negotiating continued EEA membership – thus keeping the single market intact for at the very least a transitional period, while we sort out better, long-term arrangements.